Collect contents of an environment (that contains verbatim content)

There is some useful background info that should hopefully make clear exactly what I am doing, as well as the setting this is happening in which is relevant. I'll include the problem-specific info after the ----- line.

This is for an open source project for education materials called Ximera. I am editing the code for use at a different university, and pushing those changes as they are functional up to the original project. You can find all the edited code for the cls file here (any and all incidental code is also in that github repo).

The project uses a static compile order which gives me somewhat limited options in terms of more creative solutions (for example, I would use sage for some of the desired content, but the compiler is static and won't compile the sage). The compiler isn't customized for the tex code, although it does do some magic with mathjax and some other parts that I honestly am not sure how it works.

A lot of this code, being an open source project, is somewhat cobbled together. I've been in the process of streamlining, cleaning, and commenting, as much of the code relevant to this part of the project as I can, so it should be considerably more readable than one may expect however.

Immediately after the "shuffle" environment itself is all the code for the problem environment types (there are several, but the only difference is the displayed name, which should be clear from the implementation code).

My thought was to use the Environ command to collect the contents of any of the problem contents, assign it to a command that is created based on the shuffle and then problem number. Then when the shuffle environment closes, we iterate over the questions to display them in a random order. Random numbers provided by the pgfplots package, and a custom command I wrote to generate and permute a vector of numbers, saved in commands and counters.

The above has examples of the things that work and don't work. The verbatim and python environments straight up fail (I assume for the same reason, since python is a verbatim env created by fancyvrb). The environ package is useful for a lot of other things, so if anything I'd like to fix the verbatim side of the problem if that's possible.

As a side note, I also can't do nesting problems yet. I'm pretty sure that's just because of how shuffle is functioning and that's not too high on my list right now. It would be nice to get nesting to work, but not necessary.

You can easily implement an environment that reads its body verbatimized and then within a macro definition wraps things into \scantokens.

If you provide a name in the optional argument of that environment, you can afterwards restate the content of the environment by saying \RestateProblem{<Name>}.

It also works in cases where the Problem-environment contains things like \verb or verbatim-environments.

Problem-environments cannot be nested as the entire bodies of these environments are treated as macro-arguments that are delimited by the phrase \end{Problem} (also tokenized in verbatimized fashion).

It is also possible to create a mechanism similar to \label..\ref in order to have things written to .aux-file in verbatimized-fashion, providing the feature of both forward- and backward-referencing in the text.

If you use such a restatement-thingie in conjunction with macros like \section or environments like \theorem where counters get stepped, you might get unwanted results as each occurrence of a restatement would cause the respective counters to be stepped...

In case of backward-referencing, you'd need to ensure that all counters, control-sequences are not redefined in ways that cause trouble at the time when referencing takes place...

Be aware that I am not yet elaborating on this in detail as this kind of things requires a lot of cumbersome and time-consuming tuning according to actual/specific needs.

The risk of spending a lot of time and efforts on something that needs to be rewritten completely during the course of adjusting it to the actual needs of the questioner is high.

Therefore I suggest you to specify your needs in as much detail as possible.

Don't take your issue for a matter of showing modesty.

Instead give every information/request/requirement that is useful for providing help in an efficient way. 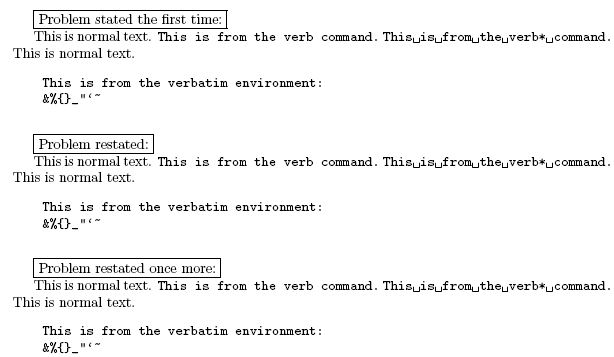 Did I get right what I read within the .cls-file?:

You wish to have an environment shuffle wherein specific other environments can be used for writing/saving portions of text. The saved portions of text shall be placed within the output-file/.pdf-file in random order when it comes to processing the end of the shuffle-environment.

If I got you right, a few questions/issues arise:

Not the answer you're looking for? Browse other questions tagged macros environments verbatim expansion or ask your own question.