Fonts known to LuaTEX [...] may be loaded by their standard names as you'd speak them out loud, such as Times New Roman or Adobe Garamond. [...]
The simplest example might be something like
\setmainfont{Cambria}[...]
[...] The 'font name' can be found in various ways, such as by looking in the name listed in a application like Font Book on Mac OS X.

My operating system is Mac OS X. The following screenshot shows the Times New Roman font in in my Font Book application. 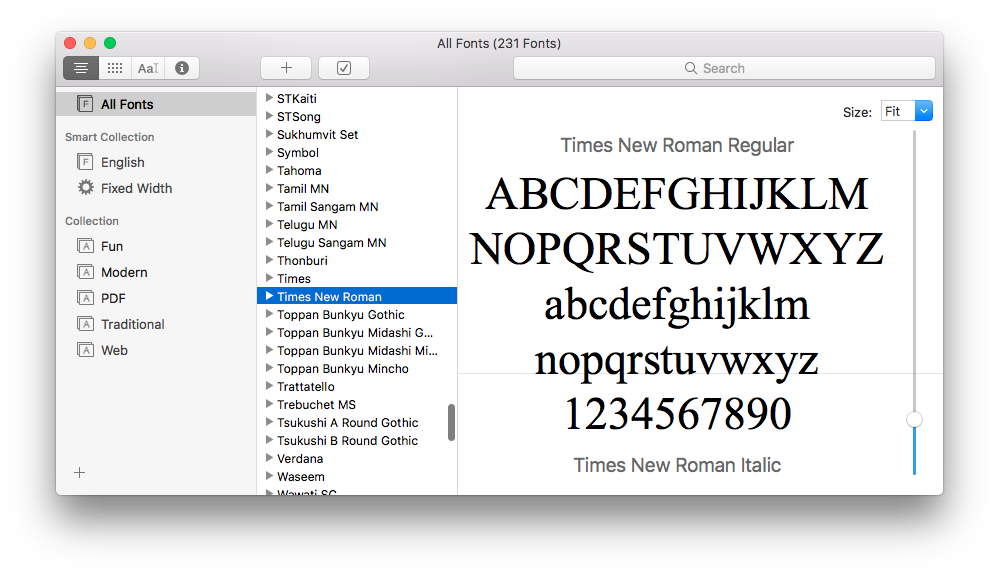 The following screenshot shows the Avenir font name in my Font Book application. 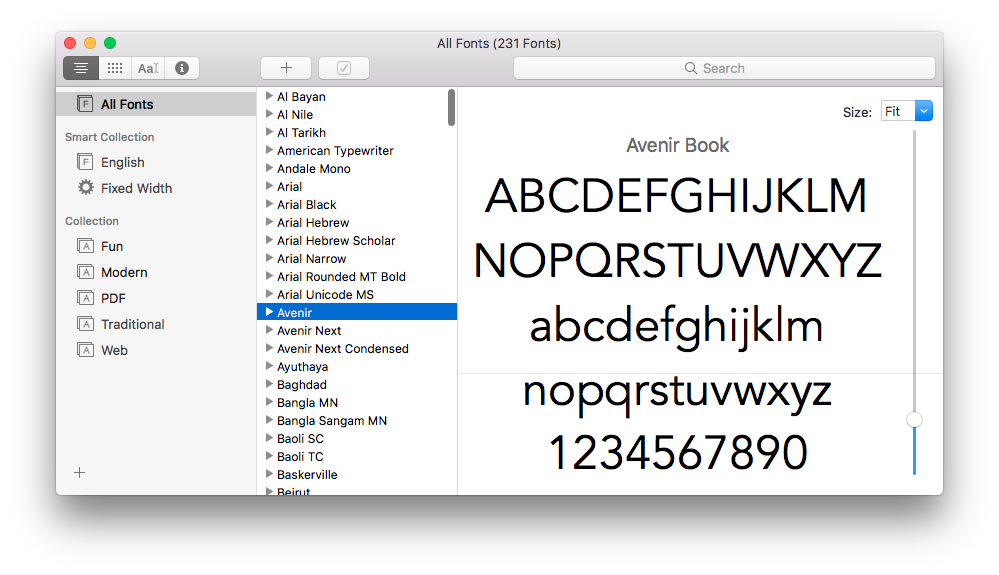 The following LaTeX document sets the main font of the document to Times New Roman.

However, replacing 'Times New Roman' with 'Avenir' and reprocessing the document with the LuaLaTeX format results in no pdf, and the following error message:

The lua interpreter ran into a problem, so the remainder of this lua chunk will be ignored.

What's the problem? Why doesn't the Avenir example work whereas the Times New Roman one does?

I don't really know why LuaLaTeX is not able to associate Avenir Book to the upright font; with XeLaTeX it seems to go well.

Actually, if one looks closely, when XeLaTeX is used, the .ttc font file in the /System/Library/Fonts folder is used, not one of the files in /Library/Fonts. Perhaps this is the issue when LuaLaTeX comes into play, because luaotfload has a different strategy for choosing fonts.

For LuaLaTeX you need to specify the font names (at least in this case):

This would be needed also with XeLaTeX if you want Medium instead of Black.

Output with XeLaTeX and just \setmainfont{Avenir}

TLDR The font name is Avenir Book, Avenir is the font family name; Times New Roman is both the family and the main font name. Below how to tell them apart and where to find them using Mac FontBook

The names you are given in the font book, at least in the portion you shared, are not the real font names, as more the font family name or font family description; sometimes they match, but many times they don't. In fact you have many fonts under a single name as you can see from the screenshot.

What you are after are the enhanced bits, which you can see from the information panel. This is obtaining by the "i" shaped button on the top left. Sorry for the Italian. What you are after is the font complete name or, as an alternate, its Postscript name 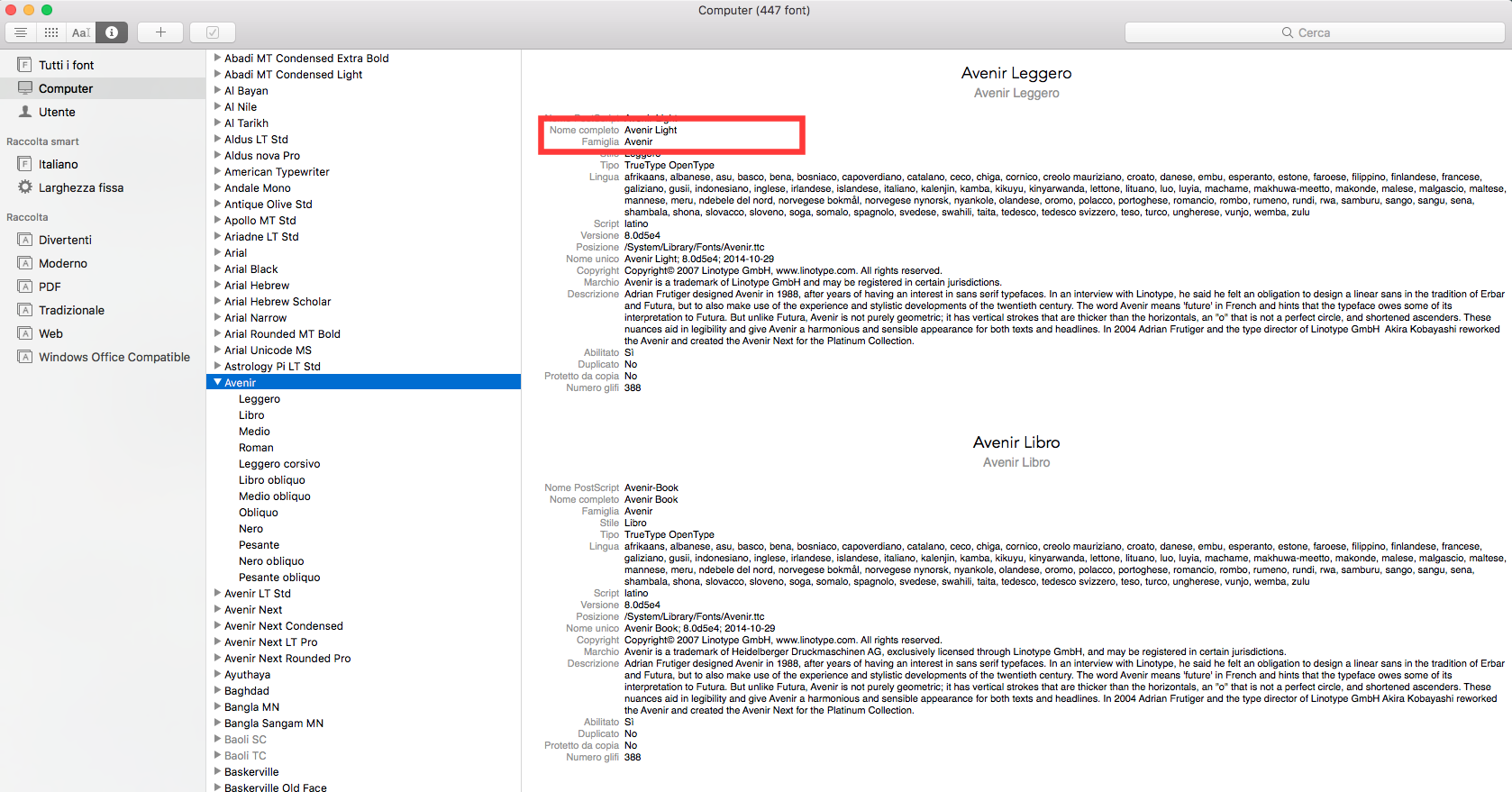 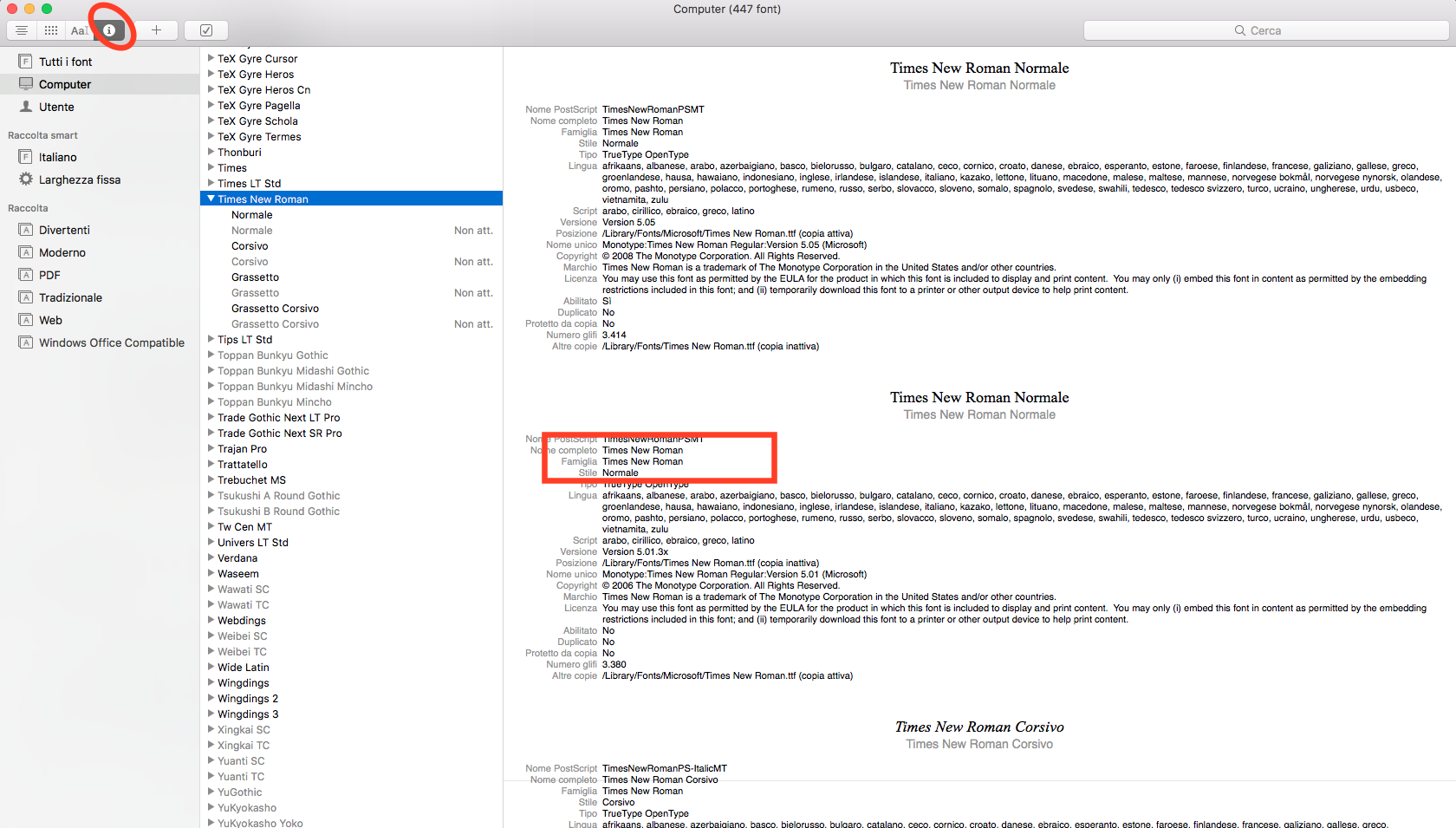 You can see that Avenir is a family name which corresponds to no specific font, while Times New Roman has a specific font with the same name

Not the answer you're looking for? Browse other questions tagged errors luatex fontspec or ask your own question.

533
How do I use a particular font for a small section of text in my document?
0
'font-not-found' error when using either the Courier or the Courier Regular fonts with fontspec + luatex

8
What does 'font name' in the fontspec package refer to on a Mac
17
Best practice - how can I get my whole document (including math) to only use font X with LuaLaTeX and fontspec?
2
Installing a .otf font and using it with fontspec (LuaLaTeX on a Mac)
10
How can I use OpenType Collection font with fontspec package and LuaTeX?
0
'font-not-found' error when using either the Courier or the Courier Regular fonts with fontspec + luatex
2
LuaLaTex not outputting small caps for Times New Roman
1
Issue selecting font from TrueType Collection with LuaTeX