I'm running into an issue when using boxes in subscripts with unicode-math loaded.

I drafted the following MWE from my package actuarialsymbol. [Command \qx below puts subscripts on both sides of a symbol; the subscripts should be bottom aligned.]

When compiling with xetex, the t and x on either side of q are at different heights:

Commenting out unicode-math, the subscripts are at the same height, as I would expect and as it works with pdftex:

I see in the documentation of unicode-math that there is some treatment of subscripts in unicode-math with xetex, but I'm honestly at lost as to what I might be doing wrong or how I should fix the issue.

Placement of subscripts using unicode-math. Is it XeTeX bug? seems closely related to my issue, but alas nothing there helped.

I can see the different shift when \vphantom is used. Curiously it disappears if one explictly choose \textstyle inside the \vphantom. It looks like another variant of the problem of leaking mathstyles and imho is probably a xetex problem and not unicode math. 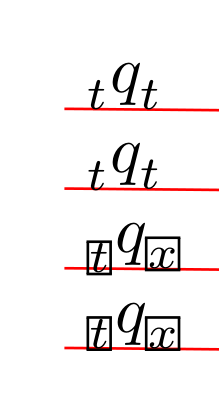 I can't confirm the issue:

The compilation with XeLaTeX yields 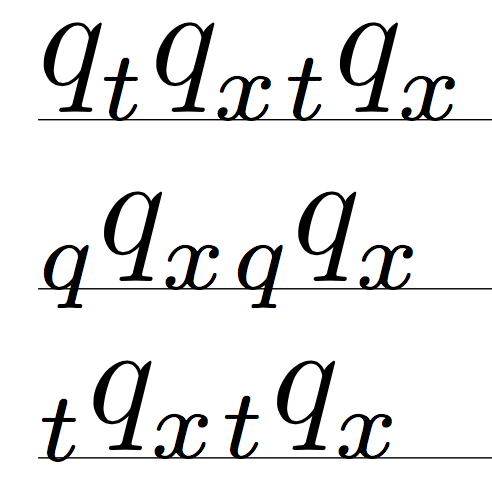 where the misalignment only appears when \vphantom{q}_t is used without the adjustment to the height.

Not the answer you're looking for? Browse other questions tagged xetex subscripts unicode-math or ask your own question.

36
Why is the fraction off the math axis in XeTeX?
20
Placement of subscripts using unicode-math. Is it XeTeX bug?
3
Bug in xelatex + unicode+math + vphantom
7
Discrepancy between lualatex and xelatex regarding display math vertical spacing
6
Subscript placement differs with unicode-math. Intended?