My question begins like this one: Polyglossia and toc.

For some reason, the french option of polyglossia removes part numbers from the table of contents, leaving an ugly space in its wake. The question linked above asks for a way to add these numbers back, and it received a good but very complicated answer. I'm not asking for the same thing: I don't want the numbers back, I just want to remove that space, and I believe there is an easy way to do that.

Indeed, adding an \unskip in the argument of \part is sufficient to remove the unwanted horizontal space from the table of contents. See the MWE:

(The change of language between parts is only there to show the difference. My document will be in French only.)

Now I just want to find a way to remove that space to all parts, without needing to add \unskip every time. I thought of a naive way:

But when I try to compile, nothing happens, the compilation seems stuck.

So, what's the easiest way to get rid of that unwanted space in the table of contents?

Bad design of the standard classes, but they’ve been like that for many years… 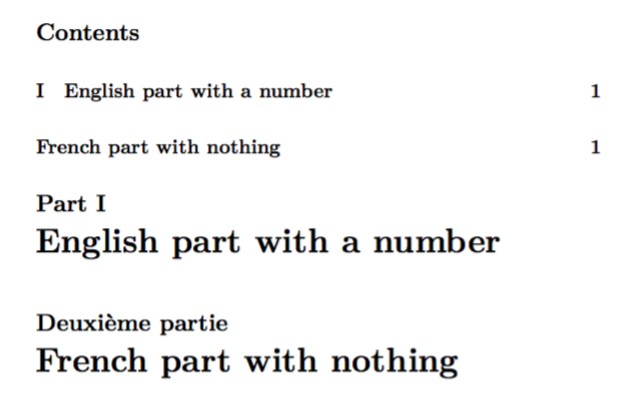 Not the answer you're looking for? Browse other questions tagged table-of-contents xetex polyglossia or ask your own question.

2
Remove bibliography entry from ToC or change the way it is displayed
5
Change title of Table of Contents
5
Page number on the left with book class
1
Old names in content even with using \renewcommand
7
Adding space in ToC between the part number and part title
4
Remove chapter number from memoir class ToC
1
Numbers before parts and chapters in the table of contents
2
TOC space after number always equal?
2
How to properly add a horizontal line to the ToC after all parts with adjusted vertical spacing (while using scrbook)
0
KOMA-Script and long part numbers