How can I set page dimensions for a CWEB document?

I have a CWEB file and I want to change the page dimensions. I know how to do this in a plain TeX document, and it always worked fine for me. If I do the same (changing hsize, the offsets, etc.) in the CWEB file, I get completely screwed up margins and placement.

I want to have output in A4 paper. The final page dimensions are set by my pdftex to A4, so that is not the problem. The problem is rather that CWEB is made for letter paper output, so the copy is not centered, for instance.

I tried to look for a solution in Knuth's Stanford Graphbase, since it is a bunch of CWEB programs published in book format, so he must have done something to change page dimensions. The sources he makes available on the internet, however, are made for letter output, so they are of no help. Any ideas?

So far, I added the following code to the beginning of the CWEB file (this code works in a plain TeX file by the way):

This is documented in the CWEB manual (which you can open by invoking texdoc cweb which opens a DVI file, or read as PDF online), in Appendix C: How to use CWEB macros (page 25), point 4.

If you change any of these quantities, you should call the macro \setpage immediately after making the change. 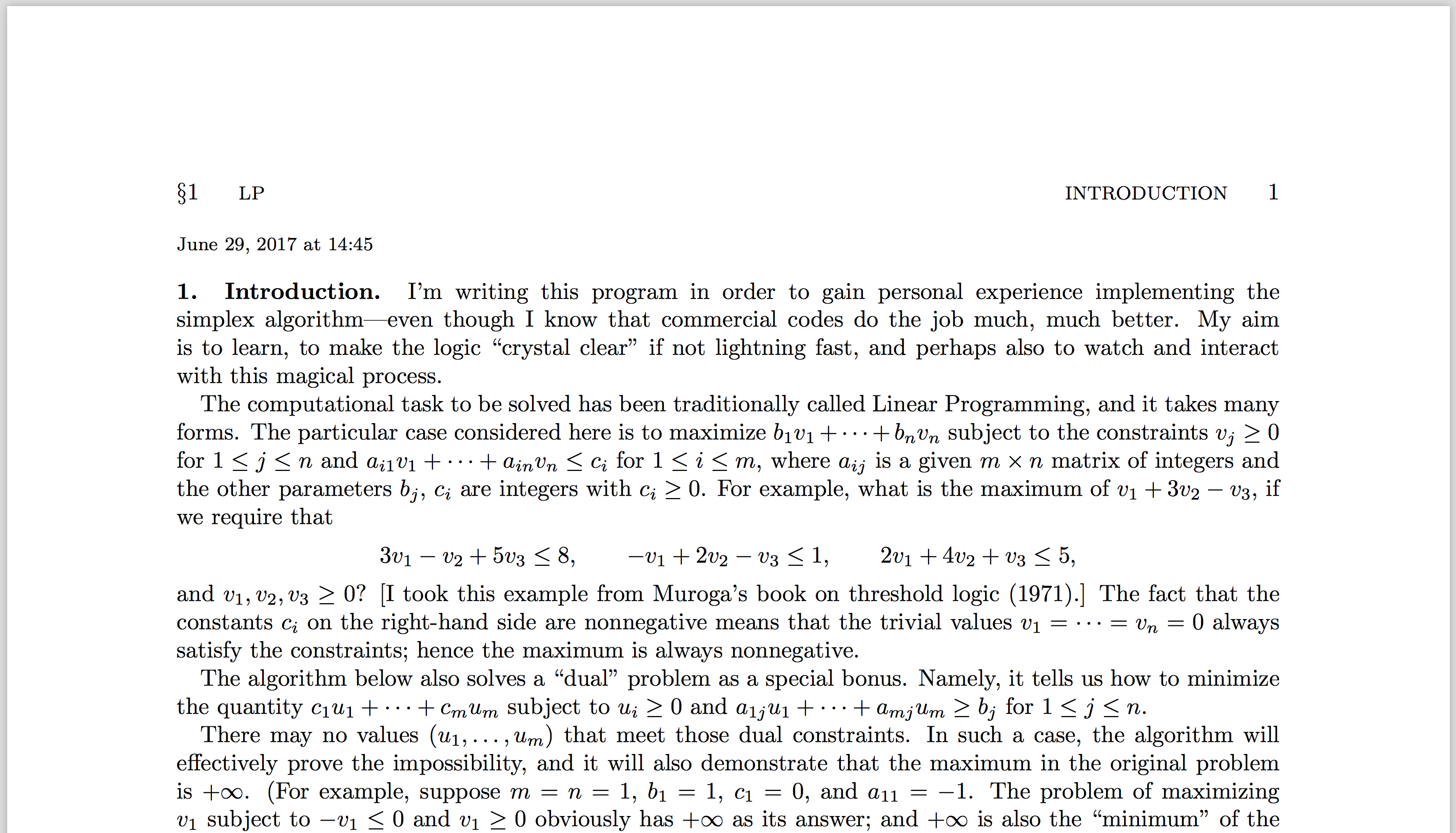 If you change the top of lp.tex from

(halving everything), then (if you don't change the pdf paper size) you get the following: 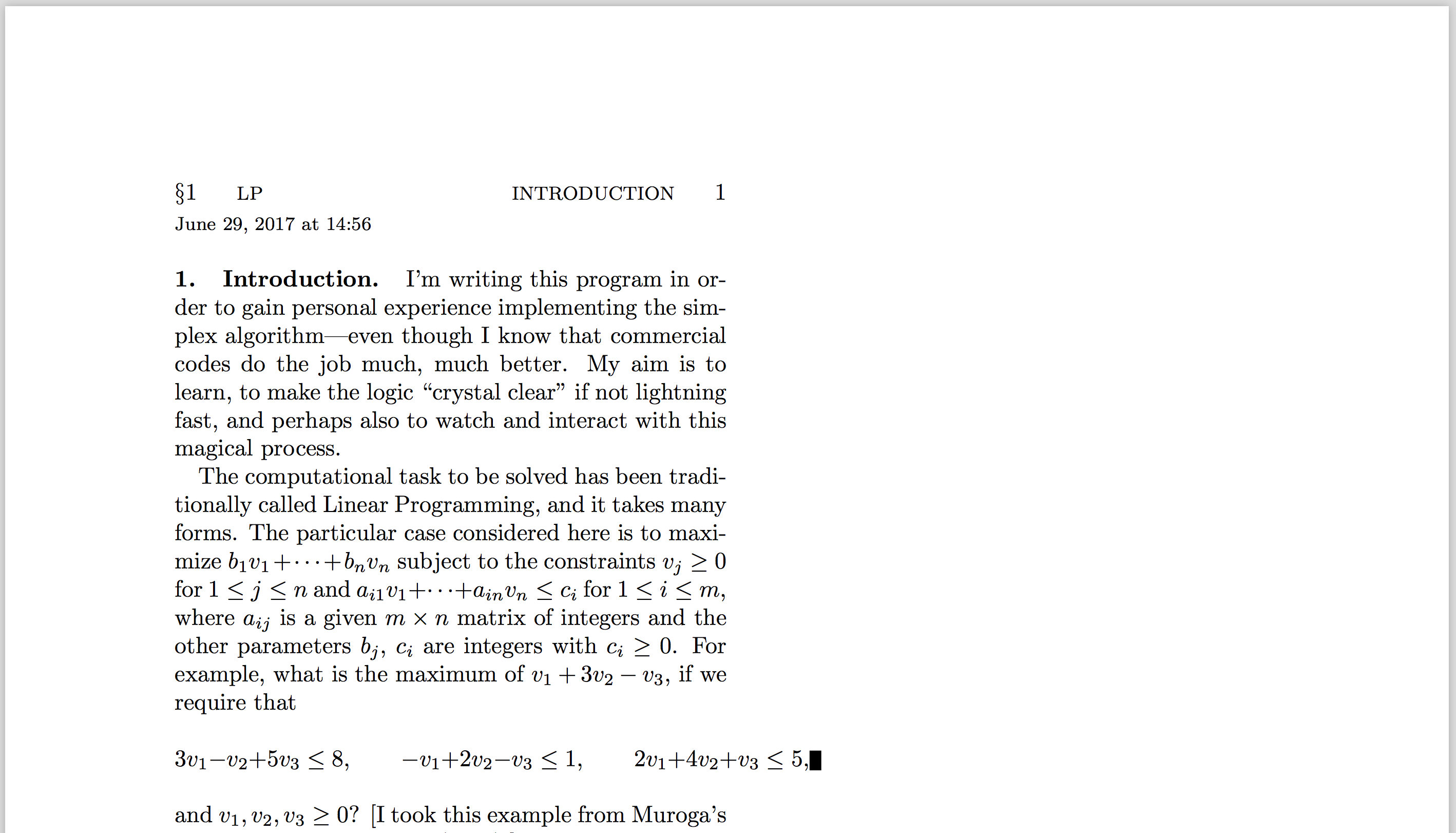 For A4 paper specifically, if you want to keep the same margin as with letter paper (which may not make much sense, but is one option), then you can change the \input cwebmac at the top of the .tex file to (if you're using pdftex):

If you want to keep the layout (the text width, the line breaks, etc.) the same as for letter paper but instead squeeze and center that onto A4 paper (as suggested in Igor's answer), then of course what you need to do is nothing specific to cwebmac and you can use the same block of code everywhere: you can simply adjust \pdfhorigin: the default is 1in (=(8.5in - 6.5in)/2). Just add this at the top of your file and don't change anything else:

Do not change page dimensions - change offsets to center the output on A4 page.

TeX does not care about "paper size". It is the job of the user to ensure that the output does not fall off the edge of the physical medium on which it is being printed through adjusting \hoffset, \hsize, \voffset and \vsize. I choose to adjust \hoffset and \voffset to preserve layout of documents using plain.tex if I want to print them on A4 paper.

If you want your output to be positioned differently when it is ultimately printed, you can offset it by giving nonzero values to \hoffset and \voffset.

The idea is to set \hoffset and \voffset in format file so that default \hsize and \vsize will be centered on A4 page. But you also have to fix a bug in cwebmac.tex (it overwrites user settings for \hoffset).

To see this, perform the following steps:

You will see that the margins are "jumping" from one page to another.

In the example I used \hoffset=-1in just for demonstration.

The following code in the output routine overwrites user settings for \hoffset which are set in format file.

This code is supposed to be used for duplex printing, where even and odd pages should have different offset - to leave more space on the left side where binding is done.

When duplex printing is not used (i.e, when \hoffset and \pageshift are not set by the user in web file), there should be no offset.

In other words, by default (i.e., not in duplex mode), \hoffset must not change, i.e., it must have one and the same value throughout the whole TeX run.

This is guaranteed to be when \pageshift is equal to \hoffset by default, i.e., the code above becomes:

But with default settings, in such case the code is equivalent to

The \hoffset etc... values are used during format gereration (tex -ini ...), which is separate from when TeX is run with the generated format and \input cwebmac is done.

So, to fix this problem, in cwebmac.tex instead of

Besides, \hoffset is 0in by default, so there will be no problems.

For completeness, following is the example of format file (omitting encTeX settings and setting catcodes for non-ascii letters)

UPDATE the bug was fixed in cweb-3.64c

Not the answer you're looking for? Browse other questions tagged paper-size cweb or ask your own question.

39
How to make document custom page dimensions?
5
How to make an image for backgrounds with exact A4 dimensions?
2
wrong page size using LyX and Koma Script
5
How to mention the bitwise or operator in CWEB?
2
Is it possible to store the height and width of an imported document in variables and adjust the page to fit it (reverse-engineering layouts)?
1
How creating XeLatex cweb document
1
Centering text to A4 landscape dynamically using textmerg and tikz
3
Different results of \mag statement