I'm creating a custom biblatex style, and wanted to have a support for bibstrings similar to what the month field has on the common implementations. That is, if I put something in brackets, {something}, then the content, something, is rendered in the field. But if I have something without brackets it is interpreted as a bibstring and converted to its definition.

I can partially achive that by checking if the content of the field is a bibstring, through \ifbibstring (and friends). However, that only works if the content is always within brackets. If it isn't biber gives and error and does not passes the field for further processing.

For example, the code below generates the warning message

and that makes biber to not create that field into the .bbl file. I found a similar error on biblatex/biber: using strings macros from one file in multiple refsections, but that doesn't address my problem.

This is my minimal implementation to demonstrate my problem. 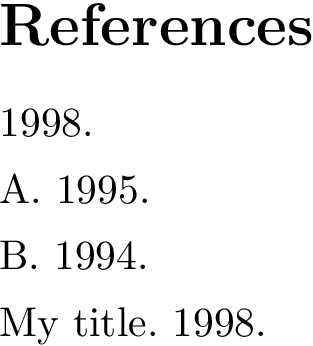 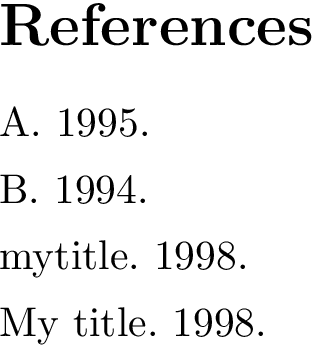 How can I achieve that with a custom style?

There are at least two notions of 'string' here. Neither does on its own what you want. Only a combination of the two can do that.

Firstly, there is @string. @string is a way to insert the same text into multiple .bib entries without having to re-type the entire text every time. This features works entirely on the .bib file level.

A @string entry has an ID (just like the entry key of a usual .bib entry) and can be called by that name.

The contents of a @string can be used by giving the string ID as a field value without the braces.

Biber (or BibTeX) resolves these strings immediately when reading the .bib file. One caveat is that @strings must be defined before they can be used. In particular you can't use arbitrary text without braces, only known @strings work. We are then left with

When the entry is processed further there is no indication left that the text stems from a @string.

This would allow you to inject arbitrary text into an entry. The text would not be changeable by biblatex, but you could change it by loading different .bib files with different definitions for the same string. This is what ieeetran does with IEEEabrv.bib and IEEEfull.bib. You load either IEEEabbrv.bib to get abbreviated journal name or IEEEfull.bib to get full journal names.

For all intents and purpses month strings work in a similar way. jan is a @string for 1, feb for 2 and so on.

@strings don't use braces in the .bib file when they are used as field values.

Then there is a second, completely unrelated concept of 'strings', namely bibstrings. Those are the ones you refer to with \ifbibstring, \bibstring and \NewBibliographyString. Bibstrings are part of biblatex's localisation feature and allow you to translate certain terms into other languages. Normally they are defined in the .lbx files, but their values can be overridden in the preamble as well.

A more simple and more typical example for bibstrings is the pubstate field. The field format for pubstate is

There are some predefined strings you can use for the pubstate field, for example inpress, forthcoming, submitted. If you use one of those, i.e. you have

in one of your .bib entries, then biblatex does not print "inpress" in the document, instead it uses the translation of that term as given in the bibstring. (Of course biblatex would happily use any other bibstring you give it as well, pubstate = {january} would work as well.) The field is printed as is if there is no bibstring with that name, so pubstate = {foonostring} would simply print 'foonostring'.

With bibstrings the input in the .bib file always features braces.

Comparison of the two string types

As far as I know there are no other combinations of @strings and bibstrings in biblatex that works in exactly the same way. I strongly suspect that the month @strings were only implemented for backwards compatibility reasons.

So as we have seen there are in general two ways to create context-dependent output.

Which one is more approriate depends on your use case. @strings seem more appropriate if you just want to save on typing, or if you want to have a way to switch between several forms of input (long vs short journal names). In general @strings are not tied to languages or locales. Bibstrings are the way to go if you want true localisation.

I can't quite tell by the example from your question which of the two approaches would be more useful in your use case.

Can we get what you want?

If you insist on the scheme you described in your question, then that is almost possible by combining the two approaches. I don't think that is a particularly good idea, but let's go.

For each possible value without braces, you need to define a @string with a replacement text. If you want a portable solution, this needs to be done in a special .bib file that you will need to load in all of your projects.

Then use the field format

for the field in question.

will print 'A title' in your document.

Why does that not give you exactly what you describe?

Firstly, the braceless input is not arbitrary. You need to define both a @string and an appropriate bibstring. Secondly, title = {something} will not always render something. If you write title = {bracelessa} 'A title' will come out instead. Collisions can be made harder by choosing more ridiculous names for the bibstrings, but they will always be possible since there is no way to find out if a field value was given directly or via a @string.

Not the answer you're looking for? Browse other questions tagged biblatex biber or ask your own question.

9
biblatex/biber: using strings macros from one file in multiple refsections

5
German APA reference: origyear field is incomplete (needs reprinttitle)
3
biblatex messing up citation entry with lots of authors
3
Citing (author, journalabbr., year) needed
7
Biblatex abbrevation for no author/editor/year/etc. in alphabetic style
4
Citing from an Encyclopedia with sub voce
2
Biblatex: Don't show n.d. when no year is given
2
Bibliography in author year style with special entrys in custom appearance
1
Problem with year and jourvol in Ukrainian localization in biblatex/biber
0
List authors or editors at the end of the entry
0
Declare bibliography entry in a foreign language, with translation