I have a document in a script that requires complex text layout which I believe is supposed to work in XeTeX. But I get surprising results:

When compiled with xelatex this gives: 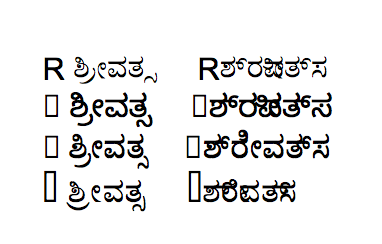 I understand the “boxes” in the output: they are because the Kannada fonts selected don't have the R character in them. (A message to this effect is printed in the terminal thanks to \tracinglostchars=2.)

Question: Why is the output wrong when the space is omitted? And how can I make things work properly even without the space?

As I understand it, in XeTeX the text layout (aka text rendering, aka text shaping) is provided by the library HarfBuzz, which is used by a lot of other applications and should be able to handle this text fine. In LuaTeX they try to avoid system dependencies and hope to implement everything themselves (in Lua code), which probably underestimates the complexity of text layout and in any case LuaTeX currently has absolutely no support for any Indic scripts other than Devanagari and Malayalam. So this is what lualatex produces for the above file: 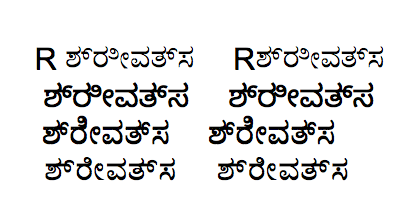 (At least it's consistently wrong which I understand!)

Edit: Thanks to @cfr's answer below, I know what I should do to resolve the actual problem: specify the script when loading the font (e.g. \fontspec{Noto Sans Kannada}[Script=Kannada] or the better way in her answer). So it's possible to resolve the issue; the only remaining question is: What's going on?

And for what it's worth, here's a minimal plain-XeTeX file that reproduces the issue (compile with xetex rather than xelatex):

I don't have the first or last font. However, Polyglossia works correctly for me. (I assume it would probably also work with just the correct font configuration, but I did it this way as this is presumably what you want in the end.)

(Sharing what I understood as a result of all this.)

Firstly, the solutions to the problem:

So is this a bug, either in XeTeX or some library it uses? No, I'd say it's a user error. Still, the fact that everything works fine when there are spaces between words (without having to specify the script) perhaps makes this user error more likely.

What explains this discrepancy in behaviour depending on the space (just what is going on)? And can this behaviour be changed in XeTeX? What I found is the following.

The library used by XeTeX for text layout, namely HarfBuzz (which is used in Firefox, Chrome, LibreOffice, etc., see What is Harfbuzz?), comes with a command-line program called hb-view which can be invoked with a font and a string of text. With it I get the following output:

What this shows is that the output is correct if either the first non-space character is from the right script, or the script is specified explicitly.

So the behaviour seen in XeTeX (the difference between "Rಶ್ರೀ" and "R ಶ್ರೀ") is explained by what @Ulrike Fischer pointed out in The XeTeX companion:

XeTeX’s approach is the following:

Thus XeTeX’s typesetting engine places words rather than glyphs, the latter being drawn by the font rendering engine.

(The “system libraries” and “font rendering engine” above are HarfBuzz now (thanks to Khaled Hosny); they used to be ICU earlier.) So

Still it seems best not to rely on such guessing, and specify the script explicitly.

Working with both scripts

To have both scripts work smoothly, we ought to specify that the characters like R are in a different language. We could do this by writing \textenglish{R}ಶ್ರೀವತ್ಸ instead of Rಶ್ರೀವತ್ಸ. If we don't want to change the input though, there is a way to do this using the ucharclasses package.

I wasn't able to get it to work for some reason, so I just did it manually (referring to the example in texdoc xetex and a post from the author of ucharclasses, and with 255 changed to 4095 as mentioned in for example this answer):

This changes the language every time we move between an English character (only R above) and either a word boundary (4095) or a regular (not specified to be English) character (0).

For my original document, to deal with all the English characters, I wrote a loop to do the equivalent of

for every uppercase and lowercase letter of the alphabet:

Not the answer you're looking for? Browse other questions tagged fonts xetex indic or ask your own question.

39
How can I specify a chain of fallback fonts in XeLaTeX?
10
Font selection in XeTeX for specific characters
11
Getting xetex to complain when a character is missing
1
Typesetting Kannada text using XeTeX