In the layout I produce, the main text is typeset in two columns, and at the end of every section, the columns get balanced, and a decorative section break appears. Here's what it looks like in practice: 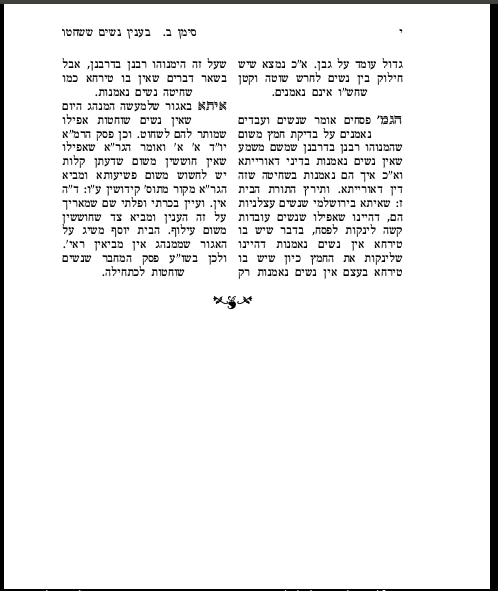 I'm trying to get it so that the decorative part will always appear on the same page as the end of a section, but it's not working nicely. Here's a MWE: 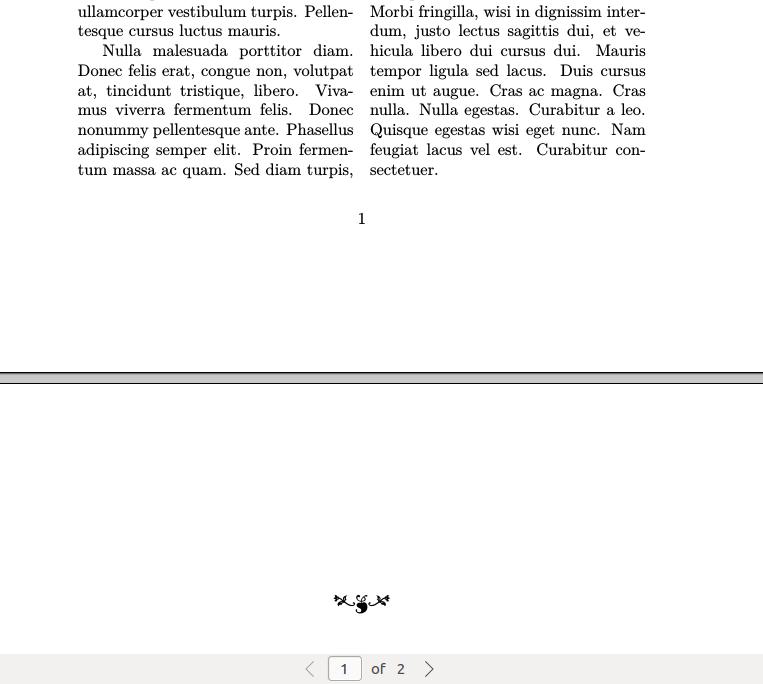 Note how the ornament was placed on the next page.

I've already tried increasing \postmulticols, which seemed like it would make a page break if there isn't enough room for the ornament, but it didn't work.

If there's no way around this, b/c there's no room on the page, is it possible to automate an \enlargethispage command?

EDIT: I tried implementing an \enlargethispage approach, by using

Which should allow for the ornament to fit on the page. It cuts down the issue, but still sometimes in practice it ends up on another page.

The problem is that multicols first adds the balanced columns and then a vertical skip of \multicolsep which generates a breakpoint after the columns. While this is normally what is wanted as this means the space vanishes in the page break if it is taken, it means that any code after ending the environment comes too late and thus can end up on the next page if the columns end at or very near the end of the page. Thereofore we disable

and proceed in a different way

To enlarge the page if this is the situation we need to hook into the multicols code to test for this before the skip is inserted.

The code added at this point could then test for the available space and do the right thing depending on the situation:

One could do the parametrisation setting up a number of registers but for now I used a simple way, i.e., you have to define \mcenlargepage to use \mcenlargepagecode above according to your needs:

And I guess that's it. For testing purposes I also increased the \textheight by 5pt and with that we get

If we disable the patch we get

Thus, except for possibly some hidden snags this seems to do what is requested.

The multicol package is free software distributed under LPPL. And so is this code of course. However, for historical reasons the multicol license has an extended "moral obligation clause" that asks for considering to pay a license fee of your own choosing if it is used for commercial applications such as producing a book to be sold.

The historical background of this rather curious moral obligation is described in the paper Reflections on the history of the LaTeX Project Public License (LPPL) - A software license for LaTeX and more which can be found on the LaTeX project site and in the TUGboat archives. That main part of the paper describes how the LaTeX Project License (LPPL) evolved and gives some history about the license "wars" that happened way back so I think it is worth a read in its own right.

Not the answer you're looking for? Browse other questions tagged page-breaking multicol or ask your own question.

3
Why is reinsertion in multicol different than usual?

8
how to make ragged bottoms of columns in multicols when preventing page breaks?
3
How do I add a block element after the current line, without interrupting the paragraph?
2
How can I get two columns in moderncv
6
tcolorbox breakable in multicol environment
3
Why is reinsertion in multicol different than usual?
1
Avoiding Page Break - Box for Theorems
2
How to place the figure caption to the left/right? Not aligning, but moving it
4
Suppress page break before Index