I have the following custom environment for examples: 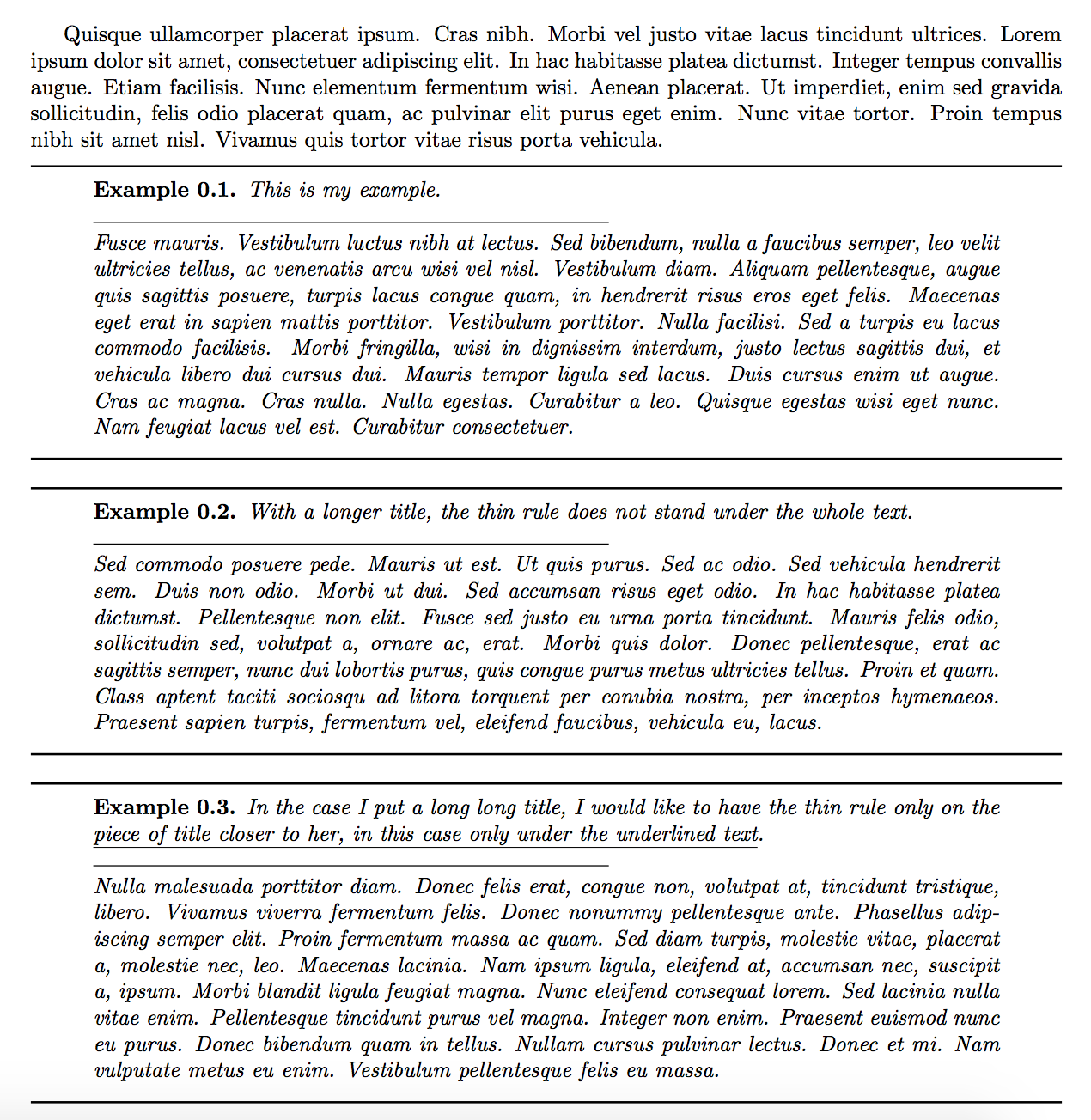 Now what I want is the thinnest rule to extend the same width depending on the italic title of the example. In this case, as you can see, the rule is too short to contain the whole title. Is there an automatic way to do it?

Also, I don't want that, in the case I extend the title to more than one line, the rule to double itself by going on another line. Thanks for help. 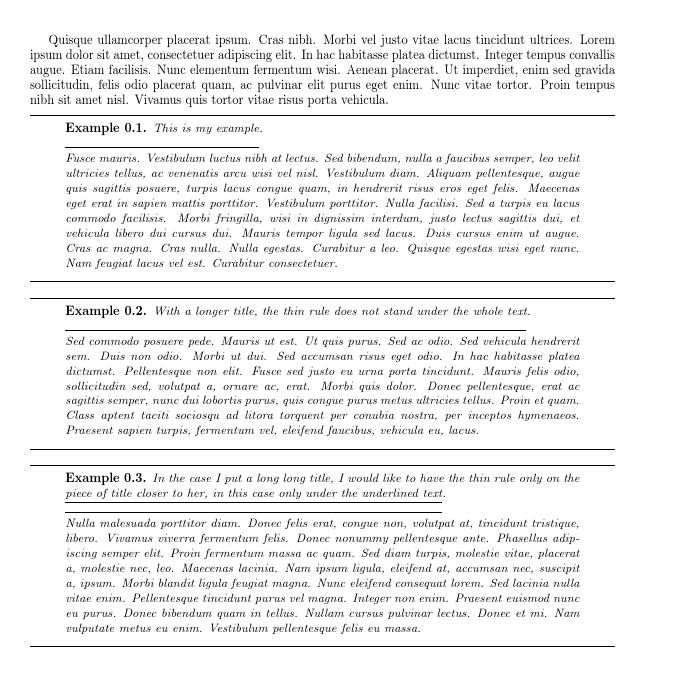 This is close to what you want, but not what you have asked for in the case where the title is longer than one line. When the title is longer than one line then I think that you want only the last line to be underlined, but I don't see an easy way to do this. Instead, I have used the \uline command from the ulem package to underline the entire title.

For your MWE, my code produces: 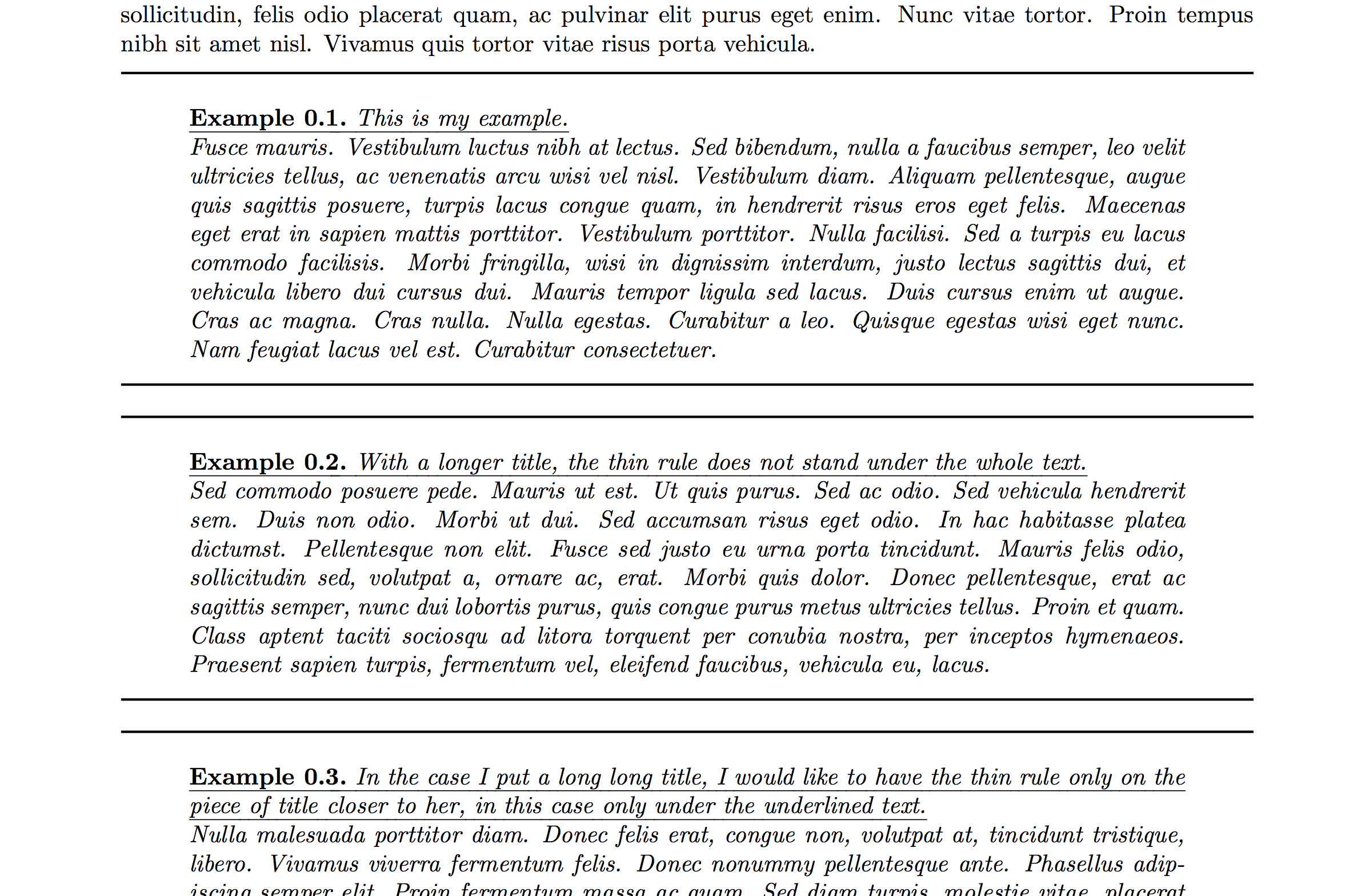 The key points in the code are:

Here is the full code:

For what it's worth, I wouldn't use a custom command quite like this for examples. Instead, I would define an example environment and then configure my editor to generate the \begin{example}{...title...}...\end{example} code. I used to use custom commands like you are doing but I found that using more standard latex syntax worked better with my collaborators, it made the journals happier and works better with syntax highlighting in my editor. Of course, there's no harm your using commands like this if you really want to...

Similarly, from a stylistic point of view I think that underlining was used primarily because at the dawn of printing font shapes likes italics, bold, etc were not available. Now that technology has progressed to make these things available, I'd avoid underlining and, instead, put your title into italics and typeset the "text" of the examples as normal text.

Not the answer you're looking for? Browse other questions tagged spacing environments rules width lengths or ask your own question.

10
Section heading, text embedded in horizontal rule
7
Length of the rule (twocolumn)
8
Adjust spacing between text and horizontal rule
26
How can I make a bold horizontal rule under each section title?
8
Variable-width horizontal rules with \cline intrude cell text
5
Placing text between horizontal lines generated by \rule: equispacing
1
\titleformat (in titlesec) doesn't show any horizontal line for chapter
4
Creating rule inside environment that is same width as text
1
Rule at the end of chapter: vertical and horizontal aligning
0
rule length equal to length of item text paragraph