In TeXShop, is there a directive to select biber or BibTeX on a per-document basis?

As in the title, I'd like to be able to select whether TeXShop uses biber or BibTeX in the document rather than using the command line or changing the default in the TeXShop preferences.

For TeX engines this is easy; i.e. you can put the following somewhere near the top of your TeX file

to tell TeXShop to compile with pdflatex, regardless of the default in the preferences. Does such a directive exist for bibliography passers? I want to be able to hit ⇧+⌘+B for this. Latexmk provides the ability to do this, but I want to do compilations manually.

The solution involved a shell script. I've made this available on GitHub, so please feel free to use and improve it.

I solved this is a mildly hacky way. First of all, I wrote a script called TeXShopBib.sh which looks like

and placed it somewhere TeXShop will find it (just /usr/texbin for quick testing in my case). Make sure the script's executable bit is set. If you have saved the script in /usr/texbin then you need to issue the command:

Then I simply altered the preference to pick up this script as the BibTeX engine. 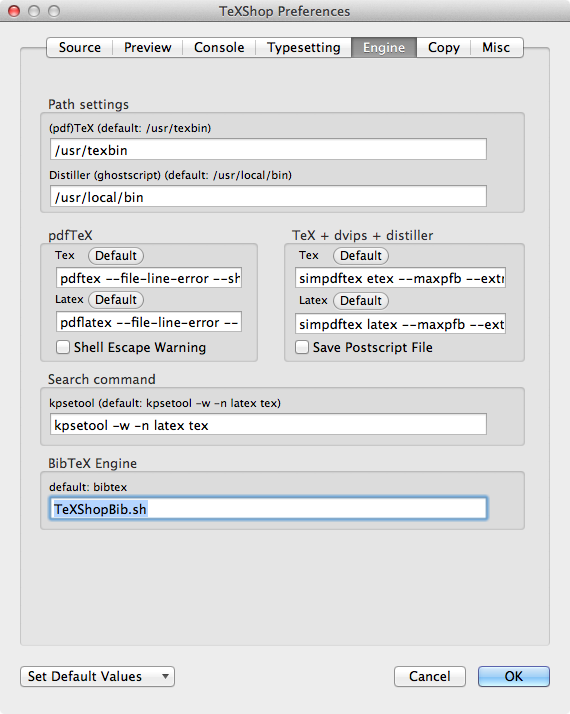 If the TeX file has a line that looks like

in the first 20 lines then it figures the rest out and works properly with the TeXShop console, in a similar way to how TeXShop handles TeX engines. This script crudely defaults to BibTeX when nothing is detected in the tex file, but is no more sophisticated than necessary for my purposes. If there is any interest in this then I can make it more robust.

Beginning with version 3.21, this feature is provided (by this very request!).

From the release notes:

The next feature was requested by Alan Munn about a year ago. Apologies for the delay. In the meantime, Mark Everitt wrote an ingenious script to provide this feature. The feature provided by that script is now built into TeXShop.

The command BibTeX in the TeXShop typeset menu runs BibTeX; notice that this command has a keyboard shortcut. In Japan, a different program is used instead, so Yusuke Terada provided an item in TeXShop Preferences under the Engine tab to select the program to be run when this menu item is selected. Examples are bibtex, biber, pbibtex, etc. The Preferences item can also be used to add flags to the command.

In TeXShop 3.21, the BibTeX engine can be selected on a file-by-file basis using the syntax

will also be accepted. The item after the equal sign gives the name of the program (for instance biber) and any required flags. This line should be written within the first twenty lines of a source file.

The % !BIB TS-program = line takes precedence. If it is absent, the Preference item determines which command is run.

So, all you need to do is update your copy of TeXShop (it should have asked you to do so).

Unfortunately no. This would be a very useful thing to have, but it doesn't exist at the moment. There's been some discussion of it on the TeX on MacOS mailing list, but nothing came of it on the development side.

Here's a hacky kind of workaround:

When you want run biber on the file, remove the # from the first line and hit ⌘+T; since the biber engine is the first line, it will be run first.

This isn't as convenient as having the engine run automatically with ⇧+⌘+B, but it helps a bit.

Not the answer you're looking for? Browse other questions tagged bibliographies bibtex biber texshop or ask your own question.

14
Adding a date to disambiguate books with same title in biblatex
18
Dummies Guide to Biber
14
the 'proper' way to cite the earliest publication date in brackets, followed by the publication date of the recent version used – ASA style
8
Why might \sin and \cos be italicized in the output?
5
Does a !TEX directive exist in TeXStudio for the bibliography command?
7
no citations / bibliography after updating biblatex from 1.7 to 2.2
5
Bypass % !TEX TS-program =
2
How to use Bibulous with TeXShop?
1
biblatex Binary on MacTex 2011 Is Missing
1
Choosing Tex engine for beginner: 25-page college assignment
See more linked questions