I'm trying to place arrow heads at the ends of a certain segment of a line and additionally put a label somewhere alongside the segment.

An example of what I mean is shown in the image below. I want to isolate the part of the arced path (line 1) on the top right between the intersection points with the straight line (line 2), which in the image is the thick line segment.

I want to be able to put a label somewhere alongside the thick line using node[near start], node[midway] etc. as is done in the left image. But additionally want arrow heads at the ends as in the right image.

The left image was created by clipping part of the image and redrawing the arced line. However, if arrow heads are added using this method they fall outside the clipping area therefore not showing up in the picture.

This is more or less a follow up question to my question here, to which I added the question of the placement of the arrow heads. I deliberately did not edit my question there as it has been answered in a satisfactory way thereby closing the thread.

This is as far as I got. Note that (intersection-2) does not match the end of segment L2 (but does match the start of segment L3) This looks like a bug. 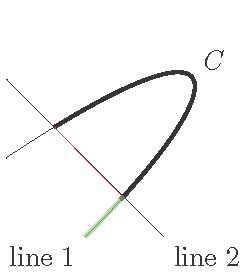 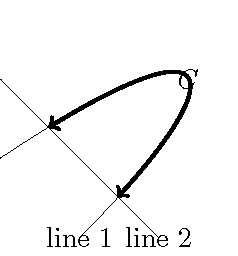 Not the answer you're looking for? Browse other questions tagged tikz-pgf arrows intersections or ask your own question.

3
How to label an intersection segment

15
How to define the default vertical distance between nodes?
7
Label an intersection with Tikz
15
TikZ: Drawing an arc from an intersection to an intersection
12
Drawing rectilinear curves in Tikz, aka an Etch-a-Sketch drawing
9
Line up nested tikz enviroments or how to get rid of them
4
TikZ arrow tips on every subpath?
3
How to label an intersection segment
1
Mark lines parallel with colored arrows
0
LaTeX Tikz: Compare two \def arguments
1
Arrow between BTrees