Should I some how manually load the expl3.el file when programming in expl3?

I think the issue you describe is fixed upstream in current version (11.91) of AUCTeX. For me, xparse.dtx is fontified like this: 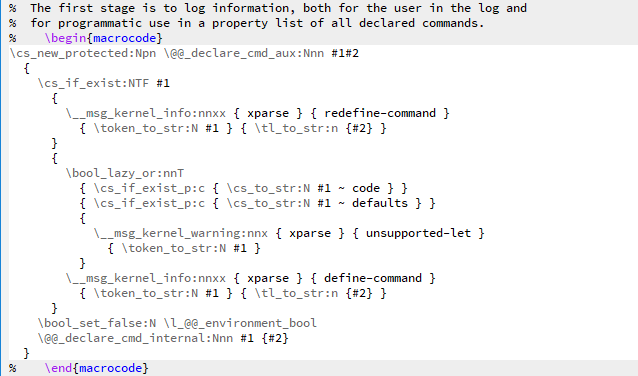 Please update your AUCTeX and try it again. I admit that the solution just works in .dtx files and not in .sty. This should be fixed; maybe you can submit a bug report.

AUCTeX is capable to parse your .dtx or .sty in order to find out which package(s) you're using and load the respective style file(s). Just add the following line to your .dtx:

After that, you can hit C-c C-n to parse the file. With this line in your .emacs:

AUCTeX parses your file directly when you open it.

Not the answer you're looking for? Browse other questions tagged expl3 auctex or ask your own question.

26
Vim Configuration for expl3
3
Impossible to select text and, then, autoformat it with Emacs+AUCtex
0
Strange behaviour when compiling auctex from MELPA inside Cygwin's Emacs (w32 version)
1
expl3 2016 .dtx files to .sty
5
Efficiently highlight known math macros in AucTeX
4
expl3 function not expanded inside `\label{…}`
1
Default Color for User Defined Macros in Emacs
3
Emacs+AUCTeX: improve emacs support on cls and sty file
11
Where I can find introduction to programming in expl3?