How to center a typewriter (ttfamily) '+'

I would like to draw a circular TikZ node with + in its center, but font=\ttfamily moves it up. Why? How to solve it? 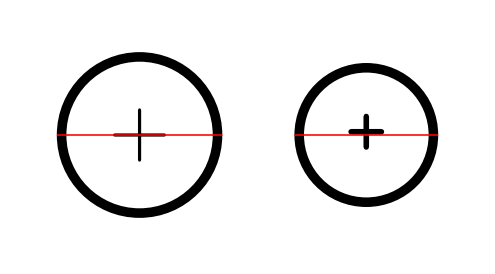 By design, the + in Computer Modern has its horizontal bar slightly above what we would consider the visual center; this "fools" TiKZ's algorithm for centering an object on the node coordinates. 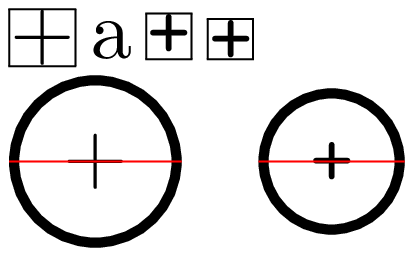 Just to add to egreg's fine answer. Why it moves up? TikZ will center the enclosing box, as is obvious from the image below: 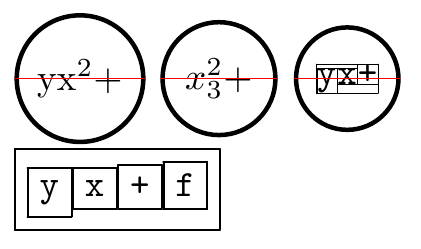 TeX aligns the letters symbols at their baseline in text mode and at a centerline, if they are in maths mode. Kerning is a partial solution as egreg, showed. Having the + in math is a better solution. It is not just a font issue, but also the way TikZ aligns which is closer to mathmode. Better even design a small cross using TikZ and have it placed at the exact  center.

Not the answer you're looking for? Browse other questions tagged tikz-pgf vertical-alignment nodes typewriter or ask your own question.

23
TikZ Nodes not exactly centered
3
how to draw XOR gate symbol as a node in tikz?

19
How to define the default vertical distance between nodes?
16
Numerical conditional within tikz keys?
17
TikZ: Drawing an arc from an intersection to an intersection
12
Drawing rectilinear curves in Tikz, aka an Etch-a-Sketch drawing
9
Line up nested tikz enviroments or how to get rid of them
3
How to draw a square and its diagonals with arrows?
2
LaTeX Tikz: Compare two \def arguments
3
Arrow between BTrees
1
How do I change the radius of circle in a node in tikz style?
2
Document header with tikz