I am trying to create some feynman diagrams with tikz. My problem is, that I want to create some simple diagrams like vacuum diagrams in φ^4 theory, which are reducible though, so I don't know where to put the vertices and the nodes. For the simplest two point function of free scalar field diagram for example I use this code:

which apparently isn't what i want,the desired diagram is :

I think the problem lies on the horizontal command which I don't know if stands for more than one variable, I just don't know how to fix it.

TikZ-Feynman (CTAN) can only use on horizontal directive, and in addition doesn't really know how to handle disconnected diagrams.

The solution in your case is actually pretty simple: just connect the diagrams so that the algorithm can handle everything nicely, but then use draw=none so that the lines aren't actually drawn.

Here's an example for your first one: 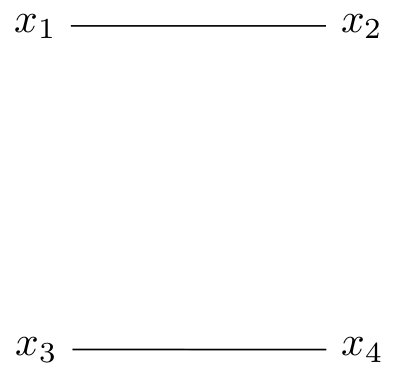 Not the answer you're looking for? Browse other questions tagged tikz-pgf inline feynman or ask your own question.