How can I create a full-size circumflex in typewriter font?

I have some C source code and would like to show the circumflex or caret (^) in the way it is typically shown in source code -- as a full-size character. The source code will be appearing in typewriter font, and I'd like for the character to have the same (i.e. fixed) width as all the other characters.

Things that I tried (all inside \texttt{}) that don't work satisfactorily:

I'm also interested in showing a full-size tilde (~), though I see that has already been beaten to death here. I really hope the same hijinks won't be needed for the circumflex, but it would be good to know for sure either way!

As Will Robertson says, the rendering of the caret depends on the font. Here I give three examples: 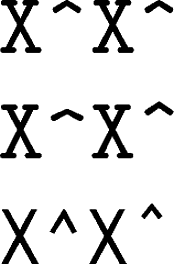 I just had this problem and did $^\wedge$, that looks pretty ok.

Inside an appropriate macro, of course. Whether this looks acceptable will depend a little on what monospace font you're using.

I just did a small recherche on both characters (after being quite shocked that I need to escape ^ which, while documented, I never needed so far yet), and I found out that switching the font looks like a good solution.

For serif (default/roman) fonts, I only looked at the default cmr and found both tilde and caret ugly but usable. (Most documents I deal with are set in sans-serif for body text… not my decision to make, though.)

For sans-serif fonts, I looked at the default cmss (ugly but usable, too), pxss (looking perfect; this is from the pxfonts package, though I recommend against using it and in favour of just adding \renewcommand{\sfdefault}{pxss}% to your document). I’ve also looked at the nōn-free fonts museo (via .ttf) and pfr (via Type1 glue); both are good but not quite as good as pxss.

For teletype fonts, I looked at cmtt (default, extremely ugly) and inconsolata (perfect; this font is my favourite ever since I discovered it for having a slashed 0 “the right way”; \usepackage[varqu,varl]{inconsolata}% to activate it).

Specifically for this answer, I looked at whether pxfont’s roman flavour is just as good as its sans-serif flavour (yes, it is).

Therefore, I recommend you to add the following to your document preamble…

… and then use either of these three fonts as it suits you. (However, I fully understand if you don’t want to switch fonts (.oO(except avoiding Inconsolata, which I can’t understand) ☻☺), and refer to the other answers to the question for that then.)

Not the answer you're looking for? Browse other questions tagged fonts symbols typewriter or ask your own question.

633
How to look up a symbol or identify a letter from a math alphabet or other character?
168
Correctly typesetting a tilde
156
Escape character in LaTeX
14
Slashed zero, the “right” way?