A macro defined with \edef, whose body consists solely of non-expandable tokens

The following plain TeX code is modeled after a similar line of code in the pgf/tikz source code (near the end of the the \pgfoo@inherit@methods macro in <pgf/tikz installation dir>/modules/pgfmoduleoo.code.tex):

In other words, I expect the exact same list of tokens as was used to define \c. The reason for this expectation is that \edef is supposed to expand only macros, but none of the tokens in \c's definition is a macro.

Macros, that is tokens defined with \def, \edef, \gdef or \xdef are expandable. Every token \let to an expandable token is expandable.

e-TeX adds some more conditionals and the expandable primitives

Note that e-TeX also adds \protected; a macro defined with \protected\def will not be expanded in the general texts for \edef or \write.

In the code you write, the first \noexpand does nothing at all. Indeed, the role of \noexpand is to make the following token equivalent to \relax at the next usage (hence unexpandable); the expansion of \noexpand is empty, after having performed its duty. However, \let is not expandable to begin with, so it isn't touched during \edef.

Similarly, \expandafter expands to nothing after having expanded the token after the following one (if expandable at all).

Therefore the code in your \edef\c becomes, in turn,

(\let is equivalent to \relax)

(\a is equivalent to \relax)

(\b is equivalent to \relax)

When \c is expanded, \let \a and \b are not equivalent to \relax any longer.

OK, as requested, here is a run-through of what happens in the TeX program, in the case of \def and \edef respectively. For this question it adds absolutely nothing over the basic point (that \noexpand, \expandafter etc. are indeed “expandable”), but it may be interesting to you anyway.

You will want to refer to the TeX program as you read the following.

What TeX's main_control procedure (section 1030) does is to read a token (get_x_token) in (essentially) a loop, and decide what to do. The inner loop is tightly optimized for regular characters in horizontal mode, but things like \hrule or \def are not part of it (→ section 1045), and in fact \def and \edef are part of mode-independent processing (→ section 1210), and result in a call to the procedure prefixed_command (section 1211). This procedure is common to many primitives/commands, but for both \def and \edef, it is called with:

Anyway, in this prefixed_command procedure (section 1211), the execution falls into section 1217 then 1218, which is:

Here, of the two parameters to scan_toks, the first one (macro_def, here passed as true) says that the token list to be scanned is that for a macro definition (as opposed to the token list for a \mark, \output, \message, \everypar, etc.), and the second boolean (xpand, here passed as e) decides whether to expand or not.

First, as we're in macro_def, it goes into ⟨Scan and build the parameter part of the macro definition⟩, section 474. In our example (parameterless macro), all that happens is that get_token gets token begin-group character {, and therefore this part simply ends with end_match_token being added to the token list. The token list for the actual body of the definition is scanned in section 477.

This one basically gets tokens one-by-one and adds them to the token list being built (for the body of the definition), with the crucial difference that in the case of \edef or \xdef, the tokens get expanded as we go along:

As you can see, here “expand” / “expansion” / “expandable” means basically anything that has a replacement (i.e. should be changed somehow), which does not mean only macros, and includes things like \noexpand and \expandafter: 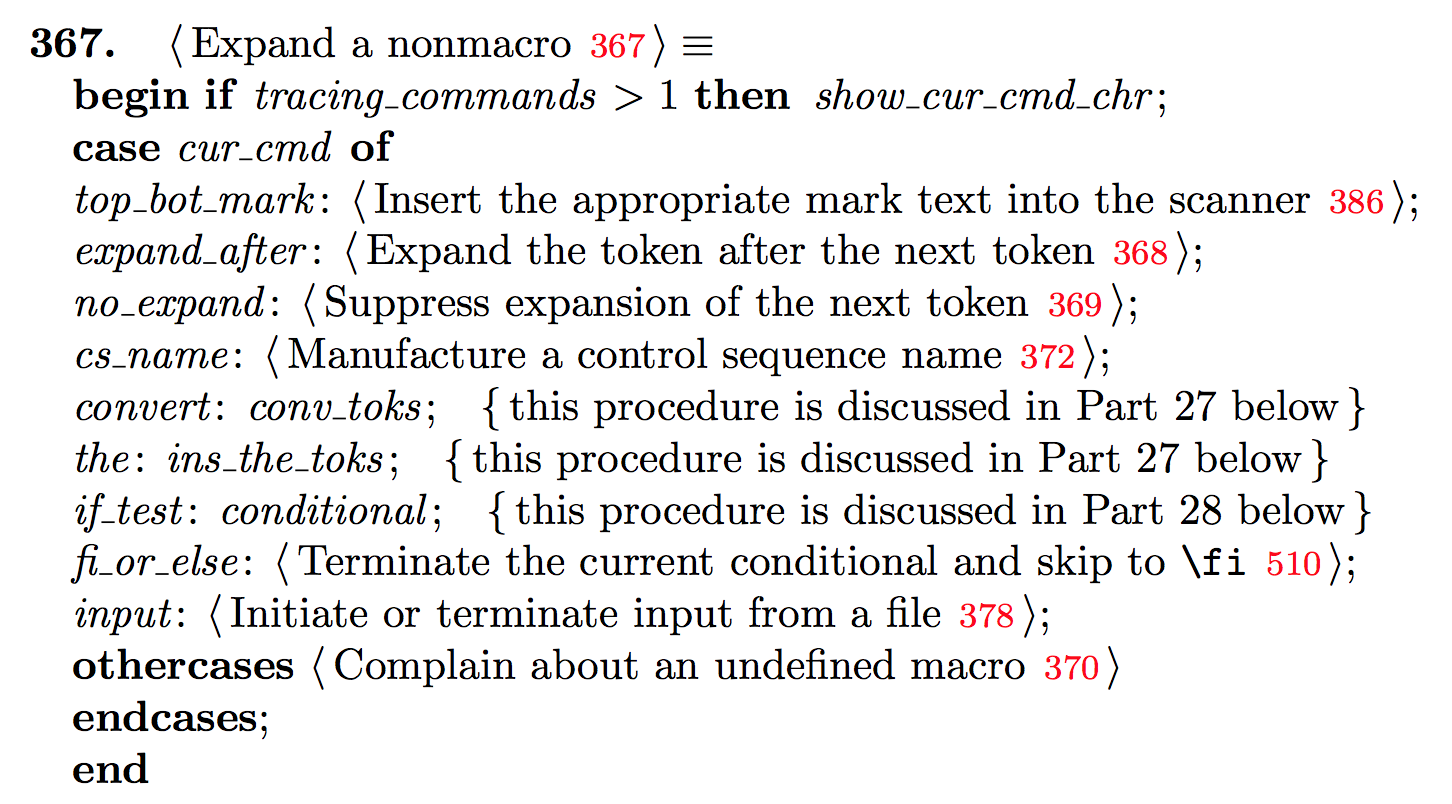 (Don't try to directly infer the expandable TeX primitives from the names of the variables code; instead see egreg's answer. For example, the primitives \number, \romannumeral, \string, \meaning, \fontname, \jobname are all expandable, because they all result in the command code convert that is in the list in the code above.)

25
Does \noexpand have to be a primitive?
8
Is \string expandable?
6
What transformations does a macro's text undergo before it is saved to memory?

25
Does \noexpand have to be a primitive?
29
Why isn't a command defined by \newcommand with an optional argument expandable?
44
How to implement (low-level) arrays in TeX
13
Useful applications of \edef with macro arguments
5
How to extend existing macro with \edef?
5
Indirectly defined macros: Undefined macro with "@" does not trigger compile error