Creating a custom list/enumerate environment with no bullets, custom spacing and alignment, a higher nesting limit, and in-item line breaks

I'm writing a document (bridge system notes, if that helps anybody visualize what I'm looking for) and need to make extensive use of nested lists. Here's a minimal example of what I'm using now:

This mostly looks and works great, but I'm having three problems.

First, the built-in LaTeX nesting limit still applies, and I want to be able to nest at least two levels beyond that. I've looked at a couple of solutions on this website, but couldn't see how to adapt those answers to also fit my additional needs.

Second, if the second part of the \bid item is too long, it will wrap around, but since \bid just takes both inputs and puts them in one line with some space in the middle, the new line will start below the first input, and I would like it to start below the start of the second input on the original line.

A third and less pressing problem is that in order to achieve the horizontal spacing when the first input of \bid varies, I often have to either pad the first input or insert negative horizontal space. I rarely have to adjust by more than one character width, but it would be nice if there's an easier solution, and this document is several dozen pages long so the padding adds up.

Either further modifications to the environment and commands I've made or an entirely new solution would be great.

Don't insult packages by loading them and then mucking around with LaTeX's innards when they've taken great pains to tidy those smelly entrails away. They'll get all upset and think you don't understand them.

Instead, use enumitem if you load it. Or don't. Either way. For my money, I'd use it, but some people seem to enjoy the pain. It has good documentation. See, especially, the pictures on page 5.

You don't need \bid to take 2 arguments. Just 1 for the label. Even this isn't needed. It would be clearer in some ways to just use \item. But there's a case for \bid, so \let\bid\item should do the job.

This specifies up to 10 nesting levels in the usual way. Increase or decrease as required. It is better not to create many more levels than you need for capacity reasons.

Make the width of the labels standard and you shouldn't need to worry about fiddling with spacing adjustments (or \ \ \ \ which won't always give you the same amount of space and is horrible anyway). 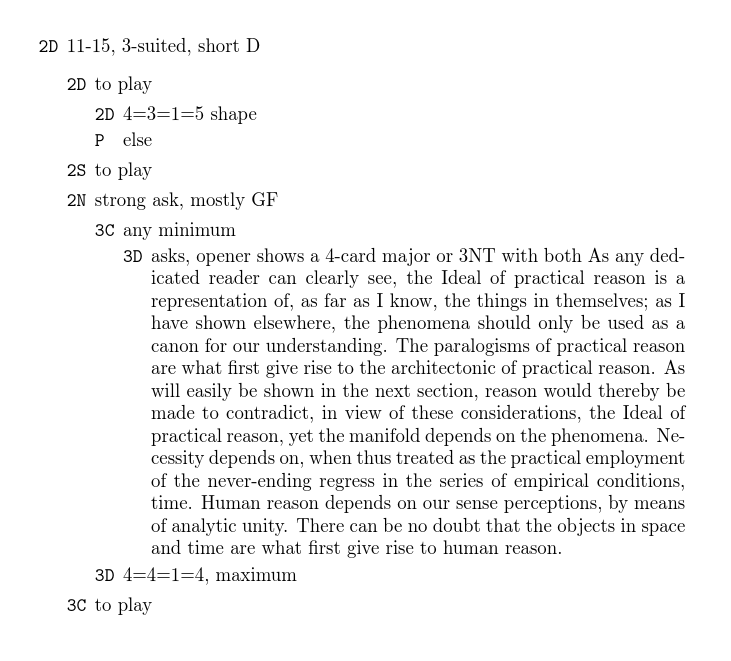 I think you should use the enumitem package to create a custom description environment.

Not the answer you're looking for? Browse other questions tagged spacing lists itemize nesting bullets or ask your own question.

3
Enumerate and itemize undefined + captions not working
14
aligning a multiline formula with the bullet of itemize
10
Tighter-spaced bulleted list should have ordinary line spacing to paragraphs/lines above and below
4
Problem with vertical spacing of equations in itemize after the first \item
7
possible memoir bug with font sizes and \tightlists
1
In LyX, how can I nest Itemize inside Enumerate, without starting a new Enumerate item when leaving Itemize?
3
beamer - tiny - itemize - itemize leads to incorrect line spacing (and font size)
3
New line inside itemize causes excessive spacing
0
How to create a enumerate list adding a custom prefix before each item number?
0
Align all text in bullet