These seem to be very similar as they both separate two operands. When would one be used over the other? Is there any difference in the math spacing surrounding them? 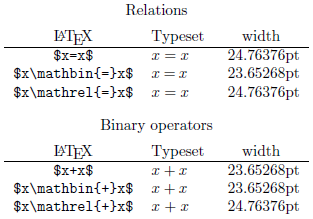 Every math character is given an identifying code number between 0 and 4095, obtained by adding 256 times the family number to the position number. This is easily expressed in hexadecimal notation, using one hexadecimal digit for the family and two for the character; for example, \hex{24A} stands for character \hex{4A} in family 2. Each character is also assigned to one of eight classes, numbered 0 to 7, as follows:

Classes 0 to 6 tell what "part of speech" the character belongs to, in math-printing language; class 7 is a special case [...]. The class number is multiplied by 4096 and added to the character number, and this is the same as making it the leading digit of a four-digit hexadecimal number.
...
TeX associates classes with subformulas as well as with individual characters. Thus, for example, you can treat a complex construction as if it were a binary operation or a relation, etc., if you want to. The commands \mathord, \mathop, \mathbin, \mathrel, \mathopen, \mathclose, and \mathpunct are used for this purpose; each of them is followed either by a single character or by a subformula in braces. For example, \mathopen\mathchar"1234 is equivalent to \mathchar"4234, because \mathopen forces class 4 (opening). In the formula $G\mathbin:H$, the colon is treated as a binary operation.
...
There's also an eighth classification, \mathinner, which is not normally used for individual symbols; fractions and \left...\right constructions are treated as "inner" subformulas, which means that they will be surrounded by additional space in certain circumstances. All other subformulas are generally treated as ordinary symbols, whether they are formed by \overline or \hbox or \vcenter or by simply being enclosed in braces. Thus, \mathord isn't really a necessary part of the TeX language; instead of typing $1\mathord,234$ you can get the same effect from $1{,}234$.

Here's an example of both situations:

3. Finally, \mathbin and \mathrel behave differently in different contexts. For example, $A = -B$ works as expected (no space between - and B) but $A = \mathrel{-}B$ would not:

This is only one example of what can go wrong with the spacing if the type of the symbol is incorrect.

2
Enclosing symbols in braces to reduce space around them
54
Differences between \stackrel and \stackbin
45
How to change default for spacing around binary relations?
27
avoid space after commas used as thousands separator in math mode
18
Bitwise operator in pseudo-code
19
What's the right space to right the alignment of a right aligned align environment?
10
How to add phantom space in math mode without losing “natural” spacing?
11
Is there a logic symbol for counterfactuals
7
LaTeX symbol for “\leftrightarrow” with “\triangleq”
6
Package bbold for mathematical symbol
See more linked questions