How can glossaries handle the article 'a' or 'an' before abbreviations?

I am wondering how would glossaries handle the article 'a' that comes before abbreviations. For e.g.,

Fox Mulder is a Federal Bureau of Investigation special agent educated at Oxford who believes in the existence of extraterrestrials and a government conspiracy to hide the truth regarding them.

However, if I use glossaries to abbreviate FBI later, it would read:

Dana Scully is an FBI special agent, a medical doctor, and scientist who is Mulder's partner. In contrast to his credulity, Scully is a skeptic, basing her beliefs on scientific explanations.

If I move the second statement up it would read:

Scully is an Federal Bureau of Investigation special agent, a medical doctor, and scientist who is Mulder's partner. In contrast to his credulity, Scully is a skeptic, basing her beliefs on scientific explanations.

How can this be prevented with glossaries?

You can use glossaries-prefix which is supplied with the glossaries package:

The command \pgls¹ has the same syntax as \gls and performs the same test as in Ulrike's answer, so \pgls{fbi} is essentially the same as

but is more convenient to use.

Note that there's no space automatically inserted between the prefix and \gls to allow for things like prefix={l'} in French. If you want a second set of prefixes, then you'll have to add the fields manually using \glsaddkey and define a command similar to \pgls.

¹ Similarly for the upper case and plural variants. See the glossaries user manual for the complete list of provided commands.

You can test if an entry has been used: 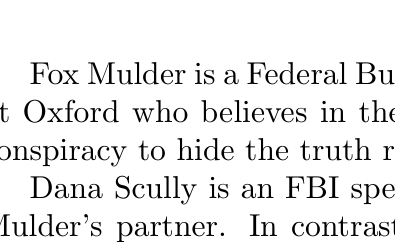 Not the answer you're looking for? Browse other questions tagged glossaries acronyms or ask your own question.