I would like to present a second version of a theorem (of, say, Theorem 1) and I would like to denote it by Theorem 1'. I reckon the best way to go about it might be to define a new theorem style or environment? The thing is that I want this new theorem environment to be identical to the default one, except for the added dash after the theorem number. Moreover, if I attach a \label to the theorem, I would like the dash to appear as part of the theorem number when referring to it via the \refcommand. I don't know unfortunately how to go about this, in part because I don't know the default settings of the standard theorem environment, e.g. spacing, etc.

I realize that this question may have already been asked, e.g. New Theorem Style, but I could not find an answer that was enough to help me out.

I would be very grateful for any help with this!

Use the manualtheorem I gave you in another answer. There is no need that the primed theorem immediately follows the original one; it could also come before it, because we use the \label-\ref mechanism.

If you have hyperref loaded, you should use

in order not to make a wrong hyperlink.

We only need create a new counter and modify it so that it always gets printed with a dash after the number. 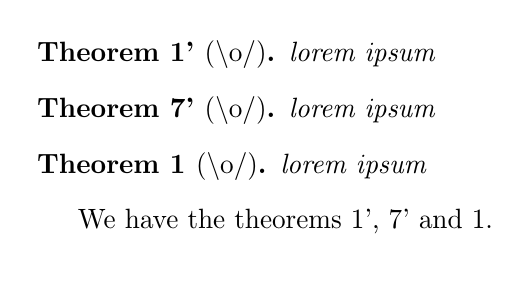 Not the answer you're looking for? Browse other questions tagged numbering environments theorems punctuation amsthm or ask your own question.