How can I adjust the following arrows such that the arrow heads of longmapsto and longmapsfrom are in accordance with those ones of longleftrightarrow?

I just want to place \longmapsto a little bit more to the right. The third arrow is in accordance with the first one, but the second arrow is not. I would like to try out a solution without changed arrow lengths. I just want the output almost as in my example, with the only difference that the second arrow should be positioned a little bit more to the right such that the arrow head is exactly below the arrow head above.

Alternatively, I can define

but then I get the roles interchanged. The second arrow is now in accordance with the first one, but the third is not.

How can I solve this problem?

The arrow heads are the same; the stems have different length, though. 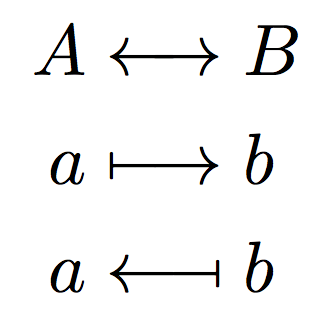 A more refined definition, so that the difference in length is negligible also in subscripts/superscripts

Alternatively, use some padding: 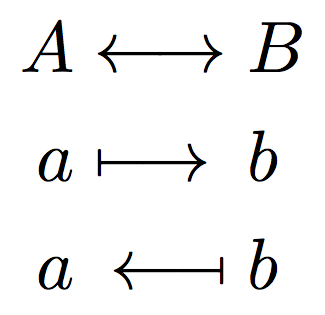 Here is a simple way to align the right-hand side arrowheads. However I propose another solution, to centre \longmapsto/from w.r.t. \longleftrightarrow, which looks nicer, from my point of view:

Thanks to @egreg I've found a solution.

It seems that \newcommand{\bijpad}{\mathrel{\mkern4mu}} is not necessary. Instead one can simply add \: before \longmapsto.

11
How to draw an arrow in the middle of the line of a circle and how to position the arrow?
27
Placing footnotes or endnotes at the end of the current paragraph
6
position symbol horizontally
10
\xrightarrow: position of text over an arrow should be lower
6
anchor arrow start position
2
Position Node to the right of tree
4
text with double arrow
3
Problem with node position
0
Absolute position of `resizebox` and `tikzpicture`
1
Page number custom position in LaTeX