Now, I need the combination of these two -- a box that's a visible and printable part of the "text" and the functionality as a PDF form.

This should illustrate the problem:

The first "box" works as a PDF CheckBox and gets drawn by most PDF viewers as a black box; when printing, however, it vanishes, and some PDF viewers ignore the box.

The second box is just a plain box, which is printed in the required way but isn't a PDF form.

The third box is an fbox around a CheckBox, which is the desired result except that it has a weird shape and is too big -- reducing the dimensions of the CheckBox so the fbox gets small enough results in a not properly working (partially hidden) CheckBox. 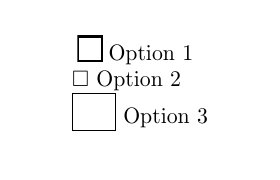 The default Checkbox field is formatted using the command \LayoutCheckField, and is defined like:

Note how there is a space between the first and second argument.

You can remove this space (which fixes the odd rectangle shape), then set \fboxsep=0pt so the \fbox wraps around the Checkbox perfectly.

The output looks something like this in the PDF: 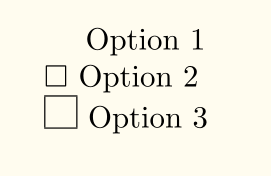 You need a unique name for \CheckBox to work. The default name is the same as the label, but in this case the label isn't valid.

Instead of redefining \LayoutCheckField one can use \ignorespaces in the label. Normally one would LIKE a space between the label and the check symbol.

Note that the checkbox border will overlap anything close to it, which is why the first and last checkboxes appear slightly to the left. Also, if you make the border white it will overwrite the \fbox.

At first I was skeptical for enclosing \CheckBox inside \mbox, but the last example demonstrates that otherwise the height will expand to match the rest of the line. 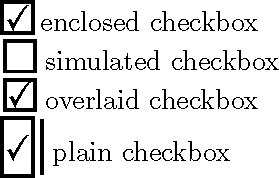 Not the answer you're looking for? Browse other questions tagged hyperref forms or ask your own question.

10
How do I make every CheckBox the same size?
5
Checkboxes in PDF forms don't show up in OS X
7
Losing check box entries when saving LaTeX-generated PDF form
9
question on radiobuttons ( \ChoiceMenu[radio,…] ) of a fillable form made with package hyperref
2
\CheckBox with hyperref: not able to check it
1
Classicthesis, acro and hyperref clash
1
Form CheckBox with answer written inside rather than on the left
1
Checkbox with numerical label inside
1
Checkboxes in long table not working