How to get/suppress french spacing before punctuation in `\href`

Attention I have already a possible answer and will add it soon. I thought it would be useful to have a solution about it on the site. (Other answers are naturally welcome too).

Question How to activate or suppress the french spacing before some punctuations like a colon in the text argument of \href locally (for one specific \href) and globally? Switching the language is not an answer!

Minimal examples for tests (the argument of \href should normally be a valid url, so it is a bit unfair to add an example without a colon in the link):

With pdflatex it depends on the link how the argument of \href is printed:

With lualatex the spaces are always there:

The issue mentioned by Ulrike Fisher with lualatex can be easily fixed. This is done in babel-french’s new version (3.3d) which is on the way to CTAN.

The fix is not related to \href; the way babel-french works now is as follows: to decide whether a non-breaking space should be added or not before the colon, the luatex code checks both nodes surrounding the `:’.

1) If a glue (actually width>1sp) is found before the colon, it is removed and replaced by a non-breaking space (penalty + appropriate glue).

2) If no space precedes the colon, in default mode (AutoSpacePunctuation=true), a non-breaking space is added before the colon only if the next node is not a glyph (this is new to v.3.3d).

This way, URLs, MS-DOS paths (C:\Program Files) and timetables (10:55) no longer require {\NoAutoSpacing ...} to be printed correctly. This works for luatex only, my attempts to do the same using \futurelet failed with xetex and lead to unreliable results with pdftex.

As explained in the documented code of babel-french, this trick is meant for tabular `l’ columns: the following exemple’s output is correct with lualatex (left image) and wrong with xelatex (right image) and pdflatex.

Unfortunately, the XeTeXinterchar mechanism provides one single class (4095) for all non-characters tokens (glues, kerns, penalties, \hbox, math boundaries, etc.); this is not sufficient to distinguish between small glues (<=1sp, which should not trigger extra space) and other tokens which do require extra space before French high punctuation characters.

The behaviour of \href is different for links with a colon as hyperref does a sort of "link type" recognition. If a colon is found in the link, the text argument is passed through \hyper@linkurl which calls hyper@chars which deactivates active chars.

The following code shows a number of possibilities. It works with xelatex too. It contains a number of zzz in the patches which are only for demo! They show which \href are affected by a patch. 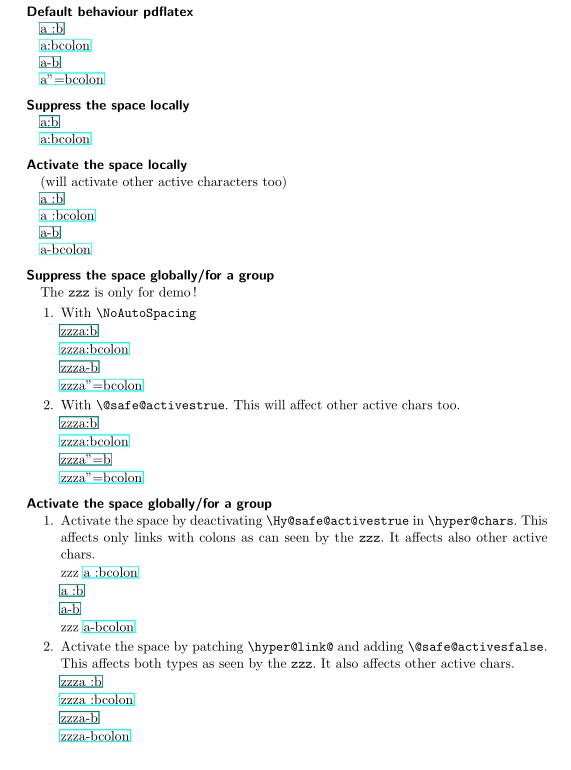 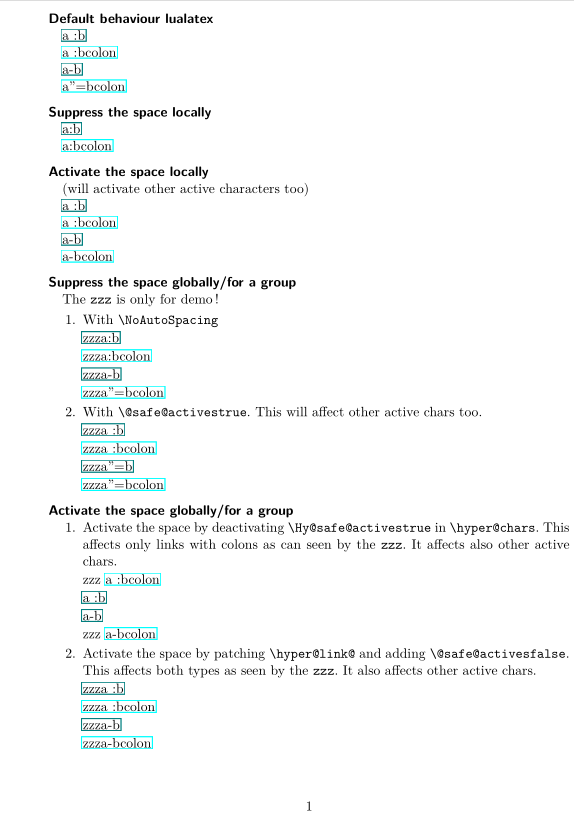 For one specific \href, a solution working with lualatex (but not with xelatex and pdflatex) is

That it works is indicative of some kind of possible bug of frenchb.

For pdflatex one can use \string: rather, but in default case where the link itself has a colon, the \string: is not needed.

For xelatex the mechanism is othe ne of \XeTeXinterchartokenstate I don't know simple mark-up to deactivate it (apart from turning if off), but anyhow for the local problem here it is always possible (and this is the frenchb documentation recommended method) to use

This works will all engines of course.

For globally turning extra French spaces off in \href (works with all engines):

Default \hyper@normalise starts with a \begingroup, but two semi-simple groups are already entered when the added \NoAutoSpacing gets executed, so no worries here, its effect will be local to the \href execution.

@Ulrike asks about activating the French spaces in the \href text. As seen above this is the case by default with LuaLaTeX, XeLaTeX, so I address here the PDFLaTeX case. For this, use

Of course this is a bit inconvenient, needs \makeatletter, etc..

If one wants to do this globally:

There is a way to inject a hack into second argument of \href and force changed catcode regime of the first argument:

This way one does not need to hack some internal macro.

Such method can be useful when attempting to use \href in context with altered catcodes, beyond what hyperref has provision for. This is however possibly only distantly relevant to the Question here.

Not the answer you're looking for? Browse other questions tagged hyperref babel french shorthands or ask your own question.

6
Paragraph spacing in other languages.
9
Write a class with language dependent strings
4
autoref in French documents incompatible with TeX4ht
23
How to suppress the space before the colon, in French language?
0
Beamer - maketitle two language
3
French spacing disappears within commands
2
Error with joined use of SVMONO class and Babel Package
9
XeLaTeX, nohyphen, space and babel/polyglossia
1
Deactivating Hyperlinks to External Documents with Cleveref