Is there a sans-serif font that appears different for I (capital i) and l (small L)?

Is there a sans-serif font that appears different for I and l? If we are not familiar with "Kim Jong Il", we might spell his name as Kim Jong Two or other incorrect ones.

From the LaTeX2e Font Catalogue: Sans Serif Fonts, there is venturis:

Some examples for fonts in T1 font-encoding 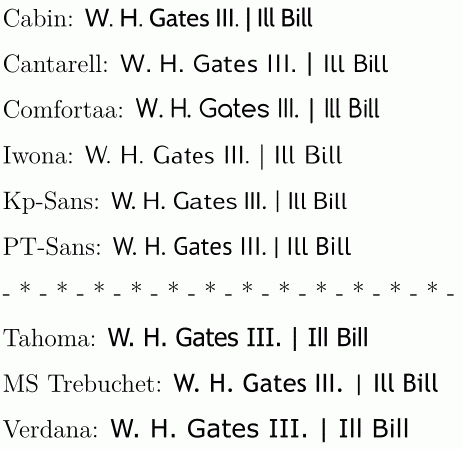 If used alone or with their family companions, most of them are called with a \usepackage command. For the three fonts below the starred line one needs to manually install the winfonts package.

Just for comparison some fonts with no or only a little distinction between big i and small L: 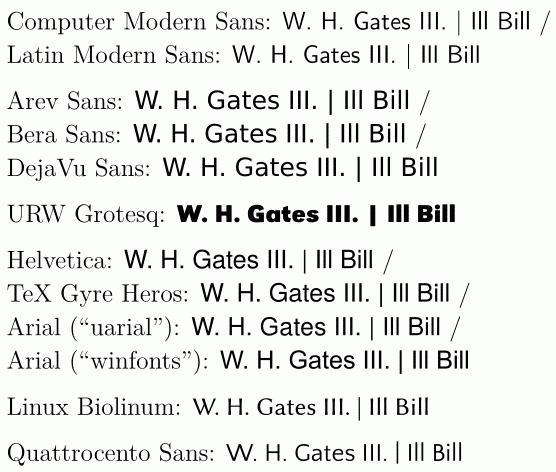 What about the new Source Sans Pro by Adobe?

A true sans-serif font might opt to add a finial to the lower case L, such as
http://www.fonts101.com/search/din+mittel

With the usual caveat involved in using truetype fonts in LaTeX.

Not in TeX Live (not yet, at least), but if you’re using xetex or luatex, here’s an option: IBM has just released a beta version of its new corporate type family, IBM Plex, containing unambiguous sans as well as monospace and serif fonts, all with real italics and in eight weights. The family is open source and available at github.com/IBM/plex.

Another unambiguous sans is Archia, of which the regular weight is available free with a tweet or a Facebook share (the whole family of six upright weights has a “pay what you want” pricing policy).

(There are more samples on Behance.)

Don’t overlook the Go fonts by Bigelow & Holmes, which are available in TeX Live. As Chuck Bigelow explains in his notes (texmf-dist/doc/fonts/gofonts/gofonts.pdf), this family conforms to the German DIN 1450 legibility standard, nicely described by Linotype.

Also noteworthy is Luciole, which is designed for readers with impaired vision. Its regular, italic, bold, and bold italic are free:

Update: Thanks to Bob Tennent, CTAN now has a package supporting IBM Plex for LaTeX and pdfLaTeX as well as XeLaTeX and LuaLaTeX.

Another fine choice is the Raleway font, which is available in a recent TeXlive via \usepackage{raleway}. It is interoperable with pdftex, but also with the new Unicode engines xetex and luatex.

Besides choosing fonts to be used in the document itself, it is also helpful to have a good font for doing the editing work. There it is equally helpful to be able to distinguish characters like o O 0 Q and l I | easily. My recommendation is neither free nor cheap but after switching editing fonts for some time I have setteled with PragmataPro.

I like Tahoma and Verdana because they have serifs on the capital I, but the rest of the characters are sans-serif.

Segoe UI works as well. I don't know if this font is commonly available. I think it's what my Outlook uses for the calendar, folders, etc.