I'm building a script for a CI to get a docker image with minimal distribution of Texlive possible, I specifically want to avoid pulling 5 Gb of texlive-full everytime I need this docker image.

Right now I see this script as

Which package should I chose for texlive-something so that these steps work? Thanks in advance.

It seems that the word minimal can lead to some confusion. In this case it means (for a package)

In other words, minimal in terms of total disk space under the hypothesis that an empty document compiles using the instruments I mentioned.

texlive installing continuous-integration
Share
Improve this question
edited May 4, 2019 at 12:32

Installing texlive from TUG (https://www.tug.org/texlive/acquire-netinstall.html) you can have a minimal latex installation with 76 MB by selecting: 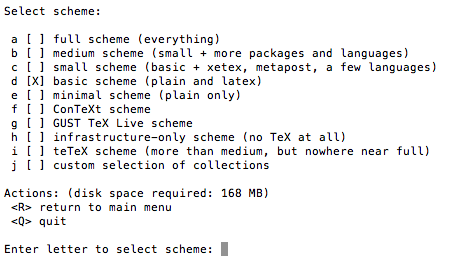 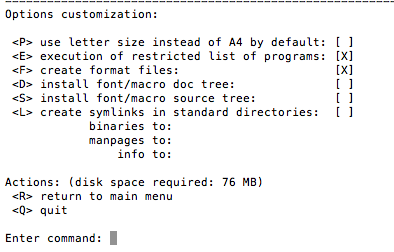 I know this is a rather old post, but if you want to build a docker image with a complete TeX Live installation (vanilla TeX Live from TUG) you can reduce its size to about 1.72 GiB instead of 5 GiB which is quite acceptable depending on your needs. However, this just minimizes the image size and does not do on-the-fly installation, because it has all packages.

Okay, so how does it work? The TeX Live installer gives you the option not to install the documentation and source files which results in a TeX tree that only contains the relevant files for a compilation. I highly doubt that you will look up documentation files in a docker image.

Let's start off with the choice of your image. Unfortunately, you cannot use Alpine this time as TeX Live does not ship certain binaries for Linux/MUSL, e.g. biber. So we can resort to Debian.

Furthermore, you need to install some dependencies before getting started, depending on the tools you want to use:

These are not "expensive" after all. Last but not least you install the vanilla TeX Live with a custom profile:

That means that you want all package (scheme-full), but do not want any documentation and source files, just the packages. And the last instruction just says that we want our symlinks in /usr/bin, so that we do not have to care about PATH manipulation.

After installing you can call tlmgr path add and you will have your binaries symlinked to your PATH. Then you are ready to go.

Full Dockerfile (partially based on sumankhanal/texlive-2018):

I use TinyTeX, it was developed for R but works nicely for other purposes.

Management is done by command-line using tlmgr as usual, and the profile file is easy to understand and adjust:

TinyTeX is a custom (and probably opinionated) LaTeX distribution based on TeX Live that is small in size but still functions well in most cases. Even if you run into the problem of missing LaTeX packages, it should be super clear to you what you need to do. You only install LaTeX packages you actually need. The manual should be at most two pages long.

Please note that TinyTeX assumes that you are not afraid of using the command line... In fact, there is only one single command that you need to know: tlmgr. It is probably not too scary.

TinyTeX only provides an installation script that downloads and installs TeX Live over the network. It may take a couple of minutes, depending on your network speed...

For Linux users, TinyTeX will be installed to $HOME/.TinyTeX and symlinks of executables (such as pdflatex) are created under $HOME/bin, which should be on the PATH environment variable:

To uninstall TinyTeX, simply delete the folder from your file manager/browser, or use command line:

Edit: @cfr asked how does it work in a multi-user scenario

There are three options, the simple "everyone uses it but only root installs news packages", the complicated "create a tinytex user group and chmod it" and the reasonable "each user may have his local package tree". Questions 7 and 8 on the official FAQ describe it:

1 - Download and prepare a fully portable distro without root:

2 - Set symlinks and permissions as root

3 - Each user initializes its own package tree

Adjusting these commands to specific sysadmin scenarios should be trivial after a couple minutes of pondering.

Questions 9 and 16 of the FAQ deal with Debian-based package managers\repos\PPAs and with macOS respectively, and are worth a read too.

includes at least three references to the "TeXlive too big for Docker container, MikTeX too esoteric for life" situation: https://yihui.name/tinytex/pain/

A testimonial that mentions files sizes:

Removed TeX Live from my system (openSUSE): 1.5gb. Installed TinyTeX + the dependencies to compile my thesis: 150mb!!!! This is great! — Bruno Rodrigues

You can replace the language with english + more if needed,

PS: Also I think your question is opinion based and will probably be closed

I come from a project where the documentation guideline simply says

I kept on doing this and noticing that it pulled in on the order of 1 gigabyte of -doc packages which would never get used for anything actually. When you are sitting on the bus and your phone drops to 3G, that means something like 30 minutes of additional build time.

I don't want to investigate the full dependency chain and replace the texlive-latex-extra dependency with a long, hand-tuned list of packages which is going to change behind my back without notice. I don't want to build my own replacement. I just want to download less.

On Debian, a simple but crude workaround is equivs, which allows you to build a small package which does more or less nothing at all. In fact, one of the original motivations for equivs was to allow you to lie to dpkg that something is already installed so it doesn't pull it in as a dependency.

Going over the build transcript, I see the following packages which I don't need. I dropped these into an equivs package and install that as part of the build.

That's some 796M of packages with pure documentation, and about 60% of the entire volume of dependencies. I'm sure the downloads could be pruned further if you know what you are doing, but this was definitely low-hanging fruit.

For Mac OS X, you can use BasicTeX. It is the option recommended for instance by pandoc (they just recommend to install the collection-fontsrecommended package on top of it).

BasicTeX (73 MB) is an installation package for Mac OS X based on TeX Live 2017. Unlike MacTeX, this package is deliberately small. Yet it contains all of the standard tools needed to write TeX documents, including TeX, LaTeX, pdfTeX, MetaFont, dvips, MetaPost, and XeTeX.

Apparently, this package is just a wrapper of the standard TeXLive installation script, tuning some paths and setting the installation to the "TeX Live small scheme" option.

This brings down my LaTeX installation from 6.5GB to merely 3.5GB (and yet I have all the packages that I will ever need).

After this, I install the language packages separately which I require:

Not the answer you're looking for? Browse other questions tagged texlive installing continuous-integration or ask your own question.