Why does TeX remove braces around delimited arguments?

This is a very annoying feature for delimited arguments! For example, in this question, there is no good way to deal with a macro \macro#1\pgfeov where #1 may either be a single braced argument or a pair of arguments, because the braces are removed by the argument scanner and then the result (if not double-braced) looks like multiple tokens and so is caught (by an inner macro) as more than one argument even though I put braces around it.

I consulted the TeXbook in the hopes that some kind of explanation would be given, but there is not even an exercise on the subject. Can anyone suggest why this is a useful feature?

Edit: I want to clarify that I am not talking about "arguments" in the imperative-language sense where one tries to treat macros as functions, passing its inputs as, say, \macro[#1]<#2>(#3,#4). I mean them in the sense described above: token lists absorbed by TeX by parsing text.

I also want to add that I am less interested in workarounds than in the answer to the question in the title: why (philosophically) does TeX work like this? For example, I know that the reason that spaces are ignored after control words is that if they were not, there would be no way to omit a space after one, since the scanner will keep piling on letters to the macro name until it no longer can. So there is a benefit to this rule; it makes the language more powerful.

One thing to note is that TeX's only means of nesting arguments are braces. You can define a macro \def\whatever[#1]{...} but when you call it as \whatever[oh[well]], things go down the drain awfully. Calling it as \whatever[{oh[well]}] however works swimmingly, and \whatever never notices it has been taken for a ride by slipping a ] into its argument. So the braces can be used as a means of hiding occurences of the closing delimiter from TeX without actually affecting the intended argument.

It also means that whenever you call a macro using delimited arguments with a non-literal argument (more exactly, an argument not completely under your own control, as it often happens when you write a macro package to be used by others), you should always add a layer of braces around each delimited argument, like \whatever[{#1}] or similar. There is no other way to ensure that arguments will not get chopped up into something different because they themselves may contain a closing bracket.

I am adding a second answer here because now I am answering a different, implied question: How do I faithfully reproduce an argument possibly brace-enclosed in the form \macro#1\pgfeov? Like putting it as an argument to \message? Well, make sure it is not quite brace-enclosed.

In non-expandable contexts, you can work with other stuff that is easy to remove, possibly an empty argument {}. If you were planning to pass this on as delimited argument, you could just use the called command instead of \empty.

Although I appreciate David's answers they seem not to grapple with the design question I asked. Therefore I will attempt to answer this myself using the understanding I've gained from our discussions.

Let's start from the premise that delimited arguments are meant to do exactly what they appear to do: grab arguments but ignore certain surrounding and intervening text. It doesn't matter whether the goal is to actually perform text processing or simply use unusual bracing conventions. I claim that:

About point 1: of course such a mechanism is required, or else text that might appear as a delimiter could never appear in an argument (and I know that Knuth is irked by that sort of thing because of his objections to certain verbatim-printing techniques in Appendix D of the TeXbook).

About point 2: as David says in his first answer, there's no other established mechanism in TeX to group things (braces are the grouping characters). It is, furthermore, how we group undelimited arguments as well, so this is an issue of consistency.

About point 4: okay, just having a logical reason to do something is not a practical justification for doing it, and my question describes a logical reason for not doing it. It would help to have a logical reason not to do the alternative. So suppose braces were not removed from delimited arguments; then you would be forced by point 1 to add them occasionally and have to get rid of them. How would you do that? There are three cases to take care of (#1 = the argument):

Bear in mind that abc... can contain nested groups, so your solution has to respect nesting. Therefore, you either have to implement a brace-parser within TeX, or you have to use some primitive that respects nesting. For the solution to be expandable you have to use \def or \edef. So: you need to \define a macro capable of stripping the outer braces from (b) but no braces from (c), and not altering (a). Here is a macro that handles (b) and (c), but not (a), using some simple utility macros from LaTeX:

You use it as \stripbraces...\@nil and it removes the outer braces from .... This is under the assumption that delimited arguments don't have their braces removed. Alas, if the text had two or more tokens but no braces to begin, then its first token gets braced.

Now, it is possible to use \futurelet (i.e. \@ifnextchar) to figure out if #1 begins with a brace, but that's not expandable. Here is an expandable version inspired by my trickery in this answer, as summarized in this one:

Used, of course, as \findbrace...\@nil{}, and you have to modify \stripbraces also to \@gobble the dummy braces you put after \@nil. These two macros together will catch (a), (b), and (c) as they should.

The alternative to this workaround is the one described in David's second answer: just prepend, say, \empty to your delimited text and then it will never be surrounded by braces, yet has the same expansion. This is considerably less tricky, to say the least.

I suppose the combination of logical consistency and avoiding extreme trickiness is a good reason to take the route that TeX follows in the real world, though I would like to observe that, since my workaround does exist, the alternative wouldn't have been unacceptable (though possibly unworkable until someone figured it out). And it's not like TeX is exactly averse to trickiness as it is, but by that logic, the present situation with David's workaround is fine too. So I didn't say that.

In my opinion the feature of TeX removing - if present - one level of braces surrounding the entire argument, be it delimited or undelimited, is not annoying.

The circumstance that people often don't take this into account when implementing macros with delimited arguments is annoying.

You can prevent brace-removal by having TeX prepend and laterwards remove a token that does not disturb delimiter-matching:

You can implement expandably checking whether the \pgfeov-delimited argument consists of one or two brace-nested components—the following example is very picky about space-tokens surrounding these components. 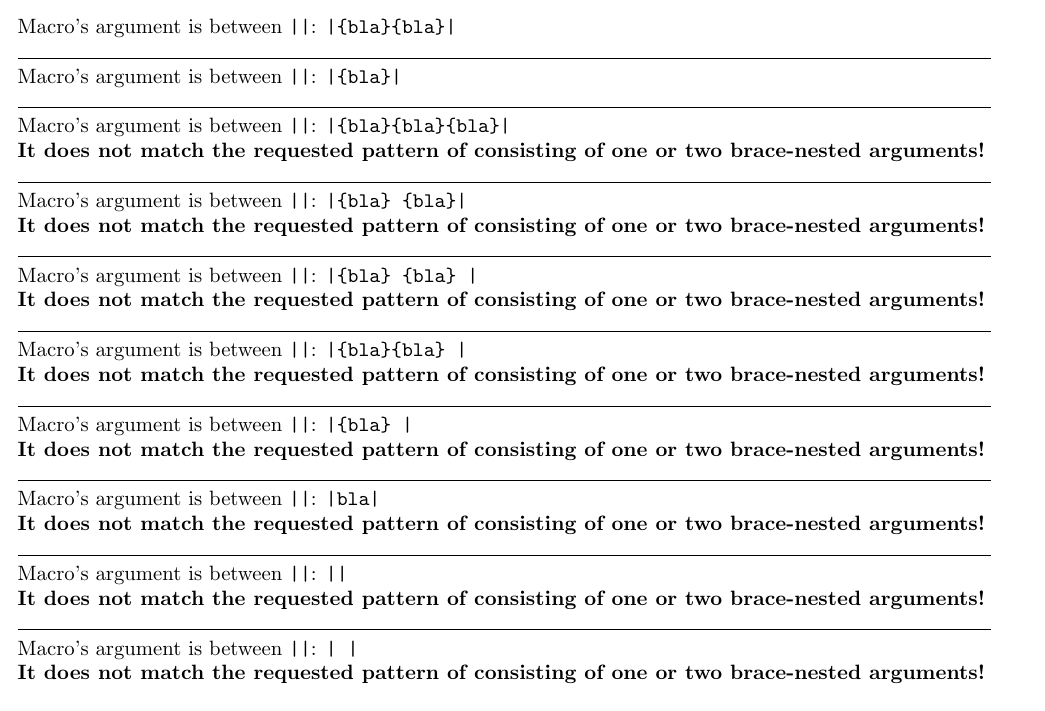 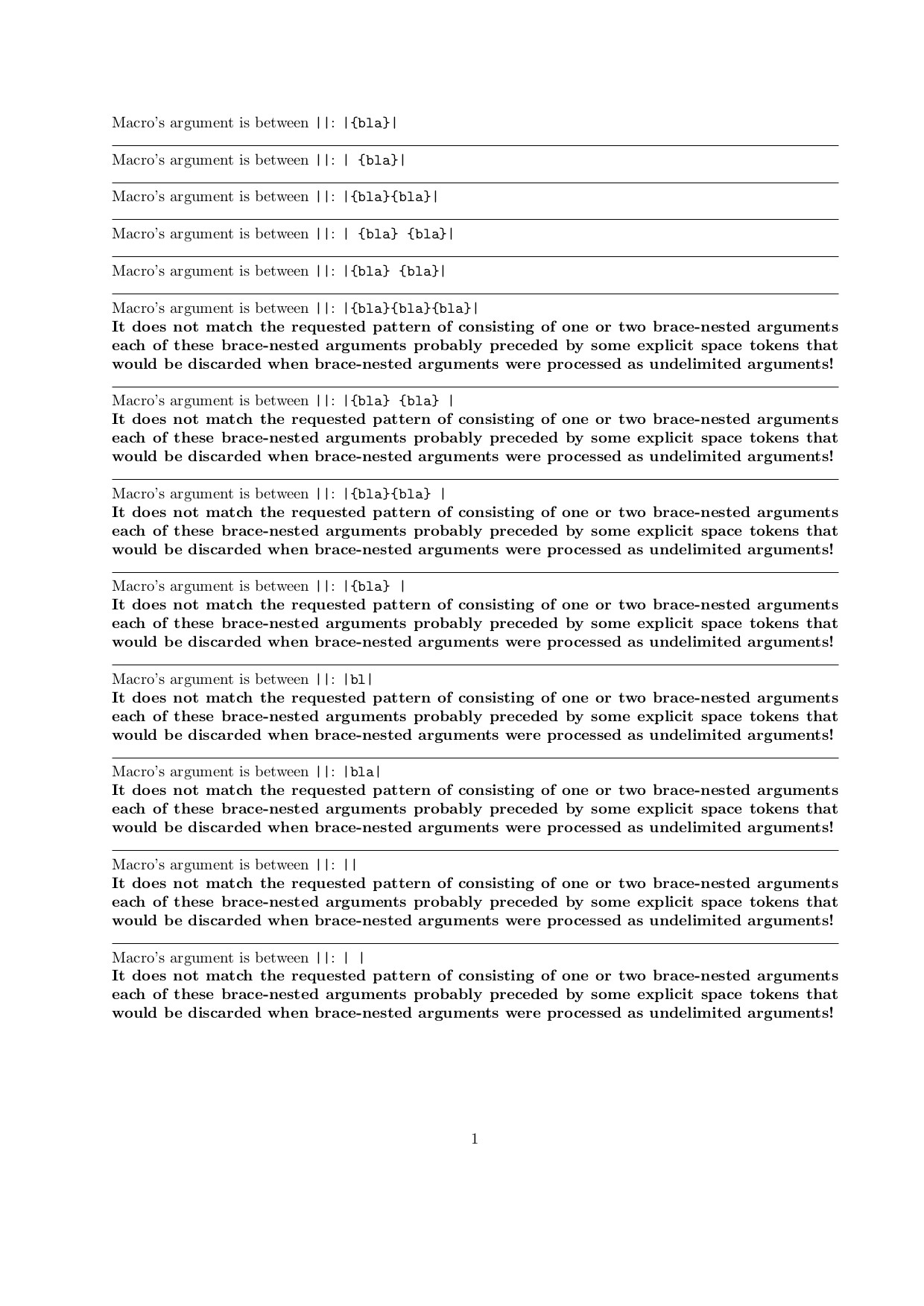 You can implement a generic mechanism for defining expandable mechanisms for

the first element of a ⟨Delimiter⟩-separated list of elements.

Such mechanisms can be used, e.g., for defining an expandable mechanism for removing trailing explicit space-tokens from an undelimited argument which does without so-called "sentinel-tokens", i.e., without tokens whose usage is forbidden in user-supplied arguments. 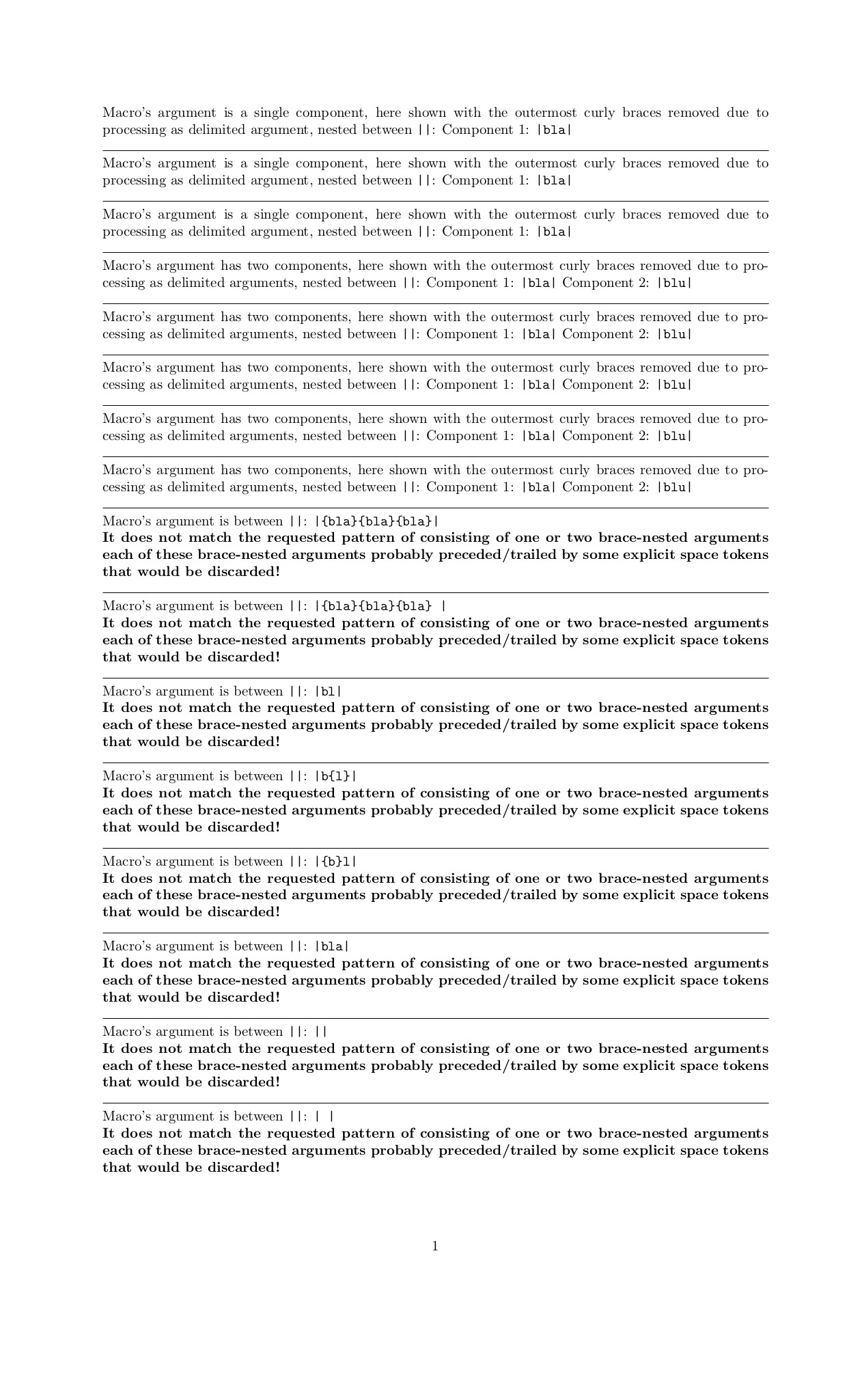 The tokcycle package can scan the tokens in advance and save them. Here, \macro is defined with the delimiter \pgfeov. The macro \macroaux is what is provided the original argument as #1, braces intact. Here, I just define \macroaux to detokenize what it was passed. 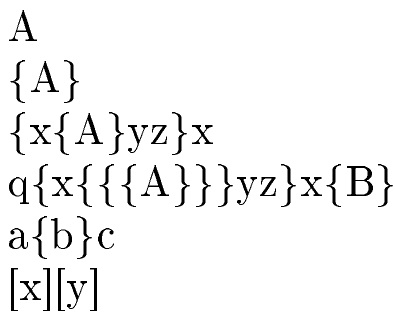 Not the answer you're looking for? Browse other questions tagged macros tex-core braces or ask your own question.

77
Does TeX/LaTeX give a headstart with other programming languages?
46
Macros with # as the last parameter
47
TeX macro idioms, or: understanding advanced macros
40
Using math in TikZ
27
Can one define an expandable command that removes control sequences from its argument?
16
Optional arguments in pgfkeys?
7
How to write a macro that is braces sensitive?
8
Square brackets in listings caption
6
Why does LaTeX parse square brackets differently than curly braces?
6
Allowing first undelimited argument to be empty
See more linked questions

10
How are curly braces used?
5
Can I define a macro that accepts everything until the next space?
14
Why does the TeX scanner process tokens for register numbers and macro names differently?
5
Plain LuaTeX: Detecting if displaymath is ended by $$ or \Ustopdisplaymath
5
How does xparse handle nested delimited arguments?
4
What would be the drawbacks of adding #0 for denoting the name of the macro that currently is expanded?
5
Methods for replacing character-tokens of catcode 12 in strings by other tokens?
7
Which tokens does TeX not use as undelimited arguments (unless between { and } )?
0
Macro with braced output
1
History - LaTeX2e - \newcommand - Why optional arguments as (]-)delimited arguments?