KOMA-Script \thanks command and biblatex-chicago

I am setting an article using the KOMA-Script class scrartcl. I need a footnote to the title, and I obtained it by using the \thanks command. As per the KOMA-Script Guide, this produced an asterisk in the title and an asterisked note at the bottom of the title page preceding the numbered notes in the body of the article, beginning at number one. But I am dealing with references with biblatex-chicago, which assigns a Chicago-style format to footnotes that begins: [indent][full-size note number on the baseline][period][space][text of note ...]. That is fine for the numbered notes, and for the spacing of the title note, which should match that of the numbered notes. However, it gives a note marker "*." which is surely wrong, and certainly not Chicago style (Online Chicago Manual para 14.24: "If a symbol rather than a number is used [...], the symbol appears as a superscript in the text but not in the note, where it is not followed by a period but may be followed by a space, as long as this is done consistently.").

How can I get "*" as the note marker, rather than "*." when annotating a title in class scrartcl?

You can temporarily redefine the footnote making command.

This redefinition is just biblatex-chicago's definition, with the fullstop replaced by \hphantom{.} to preserve the spacing. It is important you enclose the use of the function in a group, otherwise its effects spill over to the whole document.

In KOMA-Script syntax the footnote-definition of biblatex-chicago is more or less:

You can adapt this for the title page with an invisible .: 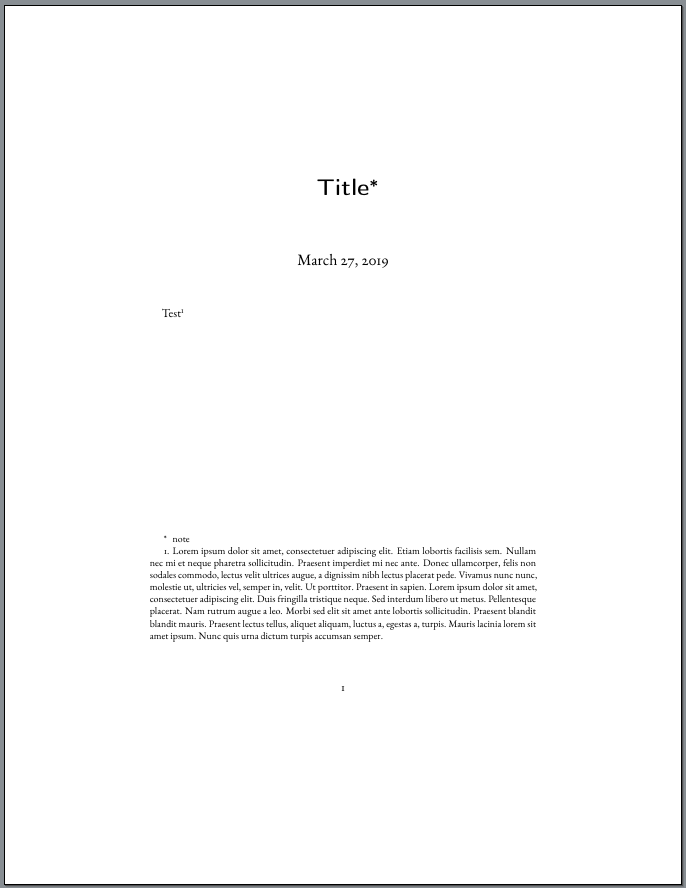 You can also activate the commented line to reactivate all KOMA-Script features for the document footnotes.

Not the answer you're looking for? Browse other questions tagged footnotes koma-script biblatex-chicago or ask your own question.

1
In LyX, how can I remove the title and newline in a subsubsection?
3
shdoc and KOMA-Script
0
biblatex-chicago and \autocite tag modification
5
koma-script: Problem with \footnote and \RaggedRight
1
Indented footnotes in KOMA-Script
4
Reformat footnote mark for \thanks, but not for other footnotes
0
Biblatex-Chicago notes and author-date formats
0
Bookpagination in Biblatex-chicago
0
Have biblatex-chicago refer to first mention in subsequent notes