How to quote a text including a footnote from the original text, APA-style

On p. 488 of Structure and Interpretation of Computer Programs (Abelson, Sussman, Sussman; 1996), the authors write

... Establishing new languages is a powerful strategy for controlling complexity in engineering design; we can often enhance our ability to deal with a complex problem by adopting a new language that enables us to describe (and hence to think about) the problem in a different way, using primitives, means of combination, and means of abstraction that are particularly well suited to the problem at hand.[1]

Programming is endowed with a multitude of languages. There are...

And then half the page is a footnote:

I would like to quote the text, including the footnote.

How can I do so, preferrably APA-style?

(I'm not sure APA says anything about this)

Questions about particular styles aren't really on topic here, but the more general problem of how to quote something with its footnote attached seems like a good question. And TeX has exactly the environment for this: the minipage.

In this example I've changed the mpfootnote marker to be a number (the default is lower case alphabetic). If your own document also has footnotes, this might be confusing (although I don't really think so) so you can define it as needed. 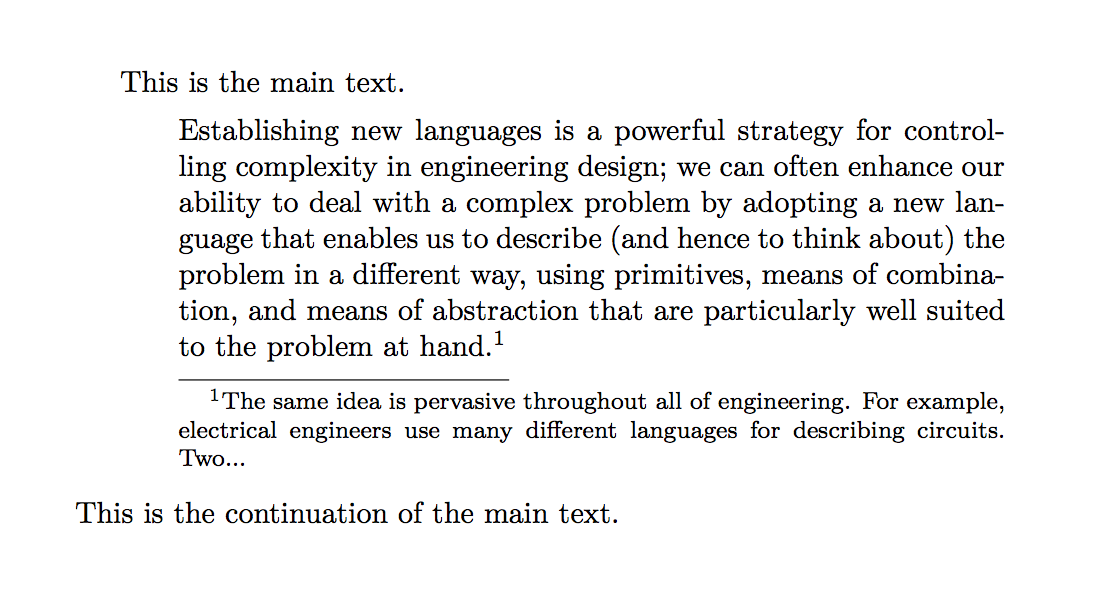 Not the answer you're looking for? Browse other questions tagged footnotes apa-style quoting or ask your own question.

2
customization of the apa-style with biblatex
1
Text in quote style with caption
3
How to Sequence number Apa style bibliography?
3
Getting ibid for apa-style citations from biblatex
0
How to delete the line breaks in apa-style reference?
4
Numbered In-text Citations With APA Style bibliography