After a backslash did its work

A rather puny question:
What is "good practice" to end a backslashed command? At the moment, I simply insert a {} if the following char (can you tell me which ones qualify?) does not automatically end the backslashed command, e.g. $\rho+\Delta{}A$. In this case, the closing bracket could go after the A but I quickly found that when expressions get complicated (e.g. A has an index 1 too) things go unmatched very fast :-)

Never use braces just to terminate a command in math mode, they form an empty node, rather like \mbox{} and so affect the space. In your example just use

An example with a clear spacing difference would be 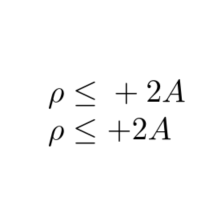 In general all letters qualify to follow a backslash and make up a command name. These letters are a-z and A-Z by default. Some commands like \makeatletter or \ExplSyntaxOn add other characters as letters (e.g. @ or _ and :). If one of those characters follows the command name you have to put some boundary there. The easiest way to do this is to follow your command by a space (as mentioned by @DavidCarlisle).

Examples (if you want more details consider reading this post):

Not the answer you're looking for? Browse other questions tagged syntax or ask your own question.

6
How to check if a string is a valid LaTex rule?

23
How to make a real backslash (escape) character?
7
TikZ: using the draw let in syntax to create an arc but the arc and its difference angle doesnt add up to 360
15
Why does `x_\text y` work?
6
Redefine \middle| to insert space before and after itself
0
How does the percentage sign % work within minipages?
2
Remove spacing after backslash
1
What is "# Notation"? How does the # syntax work?
22
Are ^ and _ the only commands in LaTeX not preceded by a backslash?