I thought that inserting #1 as default argument when the second argument was not specified would have done the job, but it didn't.

The standard \newcommand doesn't support it. The kernel provides \@dblarg:

However, you can do it more robustly and easily with xparse:

Not that I endorse that definition of \paren, of course. ;-) 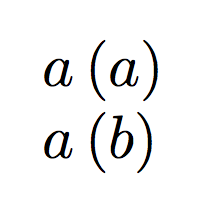 You can check for an empty argument in #1 and use it to condition on displaying either #1 or #2:

The following definition is a little simpler, but also works:

Not the answer you're looking for? Browse other questions tagged macros optional-arguments or ask your own question.

116
How to check if a macro value is empty or will not create text with plain TeX conditionals?
35
Defining custom labels