I have been looking for a Benguiat font for use with latex. I found one source that requires xelatex and seems to be only in one size. (Alas, I can't remember where I found it.) I also found fonts/psfonts/corelpak on ctan which claims to have Benquiat fonts, but I don't understand how install them correctly. The README is incomplete and presumes knowledge on the part of the user that I lack. corelpak is pretty old. I'm wondering if it is still in use and if anyone can offer advice on installation.

I doubt that Type 1 versions of this font are still sold, so you should use an OpenType version with fontspec in XeTeX or LuaTeX.

Several versions of Benguiat are sold, and how you should invoke fontspec depends on which digitization you license. For example, ITC’s Benguiat Pro offers many unusual discretionary ligatures and two stylistic sets, while Scriptorium’s Baldessare offers neither.

If you can’t or won’t pay for this commercial design, then, rather than turn to a dubious site offering pirated fonts, you should look for a truly free font with some similarity to Benguiat. Identifont allows you to search by similarity, and its fourth suggestion for fonts like Benguiat is the free Amarante, from Sorkin Type and Google.

It’s not exactly like Benguiat, but it does resemble the condensed width Benguiat and has the same Art Nouveau inspiration: 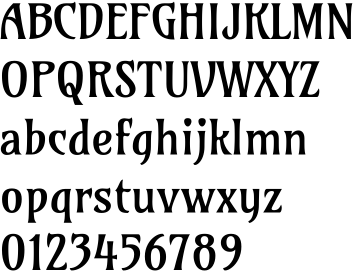 If you want multiple widths and weights and italics, you’ll need to purchase a license for the real thing.

Not the answer you're looking for? Browse other questions tagged fonts installing-fonts or ask your own question.

3
Creating a font with blackboard characters for as many engines as possible?
7
Manually installing a font map in TEXMFHOME - updmap can't find the map-file
2
Gentoo xelatex font installation
5
Verdana font not working
0
Installing Hieroglyph Package
11
How to check from LaTeX whether a pfb file exists?
0
XeLaTeX typesets characters in some Lato fonts on top of each other
0
How to install webomints in Ubuntu 19.04