How do I insert the line "|" after the equation in LaTeX (see image below)? I'm using LyX so if you can point me to the symbol of that line is also OK.

I don't know if this line has a proper name so the title of this question may be very vague. If you could provide me a name, I'll edit this question's title.

You could just type the symbol (|) directly. This won't scale, to get it larger you could use the same technique as Niel de Beaudrap. In the LyX GUI this is done via the Insert Delimiter button on the math toolbar:

Set the left delimiter to None, and the right to |. Uncheck Keep matched, and let the Size be set to Variable: 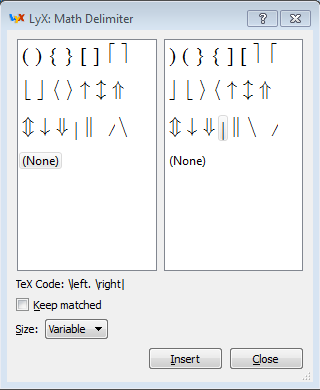 In LyX this looks like as below (left). The dotted vertical line indicates an invisible delimiter (as \left. in Niels example). Result in PDF on the right.

Edit in response to Marcs answer:

In your equation, add an ERT (Ctrl + L) and type \biggr\rvert. That is, the first backslash may appear automatically, in which case don't type it.

\biggr is one of several commands for manually scaling a delimiter, rather than the automatic provided by \left \right. Other sizes are \bigr, \Bigr and \Biggr, with the latter being the largest. For left delimiters, replace r with l. (See section 4.14.1 Delimiter sizes in amsmaths manual.)

Should you want to use \left\right, you need to add an ERT with \left. before the fraction (or whatever it is) and have \right\rvert in the one after.

I don't know how you would get this in LyX. However, if you're comfortable with writing things in mathmode by hand, I would write this as

The relevant bit is the \bigg\rvert, which you can substitute with \Big\rvert or \Bigg\rvert to get a smaller or larger vertical stroke. If you would like to resize the vertical stroke automatically depending on what occurs to the left of it, I would recommend

where \left. puts an invisible left-bracket-like symbol on the left, whose right-side partner is the vertical stroke given by \right|. These pairs work equally for other braces/brackets.

Do not use | directly. Instead I suggest you use \rvert, which is provided by the amsmath package to address the overloading of the | symbol. See section 4.14.2 of the amsmath documentation.

When using Lyx, I found it very useful (and fast) to create a shortcut for the command math-delim . |. It creates a variable sized container with nothing on the left side and the \vert on the right side, so this works perfectly for me.

So: Tools > Preferences > Editing > Shortcuts... New... Function: math-delim . | (with the blank space bethween the dot and the vertical line) and choose your preferred keys for the shortcut.

You could also try using \Bigg|_{f(x)=y} this would get you the vertical line at any scale you like!

Not the answer you're looking for? Browse other questions tagged math-mode symbols lyx or ask your own question.

2
Straight bar Latex
1
How can I do this equation?
236
Big Parenthesis in an Equation
66
Is it ever bad to use \left and \right?
1
How to enlarge the curly brackets in Aligned environment in LyX
1
What is the "pipe" for boundaries in integration and how can I represent it in LaTeX?
0
Spacing around divide (|) symbol