The surrounding big box should behave somehow like a minipage : the width is fixed, and the height should grow if we add sufficiently small boxes inside. For the moment, i use the following (simplified) MWE to produces that :

As you can notice, i nest \tikz's inside the tikzpicture, which is bad, as i just learnt in this post from Andrew Stacey. He advises to use the "fit" option from \usetikzlibrary{fit}, but i don't see how to do it, in this case.

Mark has answered the bit about getting the outer rectangle sorted once the inner stuff is in place (given the constraints, the fit and layer method seems the better fit). What I'm going to tackle is getting the inner boxes to position themselves with "line wrapping". This is not a complete solution, but if it seems along the right lines then I think that the rest would not be hard to do (but I want to check before doing that).

My comment to the question (with the quote from the real Italian Job) was along the right lines but just not quite far enough along. The positioning library can take quite complicated expressions - it is possible to do things like above={(\x > \y ? 3cm : -2cm)} of a.south - but it turns out that these are computed before the node is laid out. All the complicated positioning is done by the node code, not by the positioning code.

So we have to co-opt the node code to our nefarious purposes. Fortunately, this is relatively easy (if a little tedious to do in full). Nodes are positioned by specifying an anchor. That anchor is placed at (0,0) (the positioning library, or just TikZ, sets things up so that as far as the node is concerned, (0,0) is where the node is "at"). So if we want to place the node somewhere a little different, we simply define a rather complicated anchor. This entails either defining a new shape or using Martin Scharrer's code for adding new anchors to an existing shape. I've gone for the former and defined a "moveable rectangle". This rectangle has the property that its north west anchor can depend on a parameter. Well, actually a little computation. This computation can use the information about the node size, since it is computed while the node is being laid out. My computation is:

This tests a macro called \mrwidth which happens to be set to the width of the node (mr = "moveable rectangle") (obviously, one could adapt it to make the height available as well). If the width is big, it returns (a.north east) and if small, (a.south west). The result is saved as \mrvector. This code is executed while the node is working out the north west anchor of the rectangle and the anchor is shifted according to the result. As node coordinates are "absolute", the result is that the north west anchor of the current node is placed at either the north east or the south west of the a node depending on its width. If the coordinates had been things like (0,2cm), this would have indicated a relative adjustment.

So the idea is to make a slightly more complicated test which looks to see if the width of the node is going to take it outside the given width and if so, anchor the node on the next line. This would need a little more work, but not overmuch, as there will typically be several nodes involved in the computation. But that's just bookkeeping.

I'll put the full code at the end of this answer. If it were all packaged up in a nice package, the syntax would be something like:

As you can see, the specifications to the two nodes are exactly the same, but one ends up alongside the a node and one just below it.

Here's the code so far. I've currently only modified the north west anchor. Obviously, the others will need doing as well. And stress testing and probably some assumptions I've made will be shown to be completely ludicrous ...

The following is crude, and perhaps better done using a matrix, but it's here to demonstrate how to use a fitted box in the background.

Note that the fit = (11) (22) makes sure the box contains the top left and bottom right boxes. For more elaborate diagrams you can more node names to this to fit. 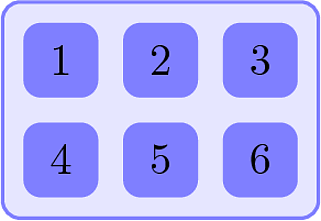 A similar result can be obtained more cleanly using a TikZ matrix. Another benefit is that there is no need for fitting, since the matrix itself takes the bigbox style.

Not the answer you're looking for? Browse other questions tagged tikz-pgf nesting fit or ask your own question.

112
Sieve of Eratosthenes in tikz
17
tikz : how to refer to a node, in nested nodes
15
How to typeset a prefix tree (aka trie)
3
How to draw a diagram with boxes of text inside each other and have them laid out automatically?
4
N-level nested nodes
3
Tikz: Nested Boxes Alignment

2
Top-align text in a TikZ node of given size for single- and multiline case
10
Rotate a node but not its content: the case of the ellipse decoration
21
TikZ node placement and arrow drawing
4
UML Statediagram
11
How to define the default vertical distance between nodes?
10
How do I encircle a partial table in tikz?
12
Numerical conditional within tikz keys?
9
Line up nested tikz enviroments or how to get rid of them
2
TIKZ Matrix nodes filled with colour afterwards and set to background