The package inputenc makes it possible, for example, to write ° to print a degree symbol. Simplifying a bit, it obtains that by making it an active character (catcode 13) and defining the corresponding macro. If its category is changed to other (catcode 12) and, then, changed back with \scantokens, it keeps printing the degree symbol. Since I need to print a string, a character at a time, spaces included, my first idea was of using \let:

Unfortunately, as jfbu pointed out, \scantokens does nothing on the \let character and so it prints [ř] instead of [°]. To make it apparent, consider the following:

Of course, in the first example, one possible solution would be to substitute the \scantokens in square brackets with \ifx\ccc\ddd°\else\ccc\fi, having taken care to add {\catcode`\°12 \global\let\ddd°} at the beginning. The problem with this approach is that it is not very 'scalable'.

My real goal here is to parse some (CP-1252 encoded) files, which can contain any characters, not just °. To put this in context and for the sake of simplicity, let us just suppose I am coding a hex viewer in (La)TeX (which, by the way, would not be such a bad idea).

So, for the textual part, I first 'load' the file with something like \edef\fff#1{\pdfunescapehex{\pdffiledump length \pdffilesize{#1}{#1}}}, which gives all character tokens with catcode 12, except the space (that has catcode 10); then I scan such a token list and act as needed, printing it or else.

So, is there a way to scan a token list, including spaces, without using \let? Assigning catcode 12 also to spaces would suffice, can I do it? How? Alternatively, is there a way of changing the catcode after a \let, which does not involve a lot of conditional expressions? If not, what would be the best (compact and/or elegant) way to do it?

When you do the \let\ccc= it will "let" \ccc stand for successive tokens, and they all happen to be non-expandable actually in your \str macro contents. So the \expandafter{\ccc does nothing. And then the \scantokens does nothing either as it sees \ccc, it does not see the ° token. By the way, you don't need \xdef for your \str definition, as there is nothing to expand as you have assigned \catcode12 to ° (in cp1252 code page, char code is 176 and this gives the ř in T1 font encoding.) 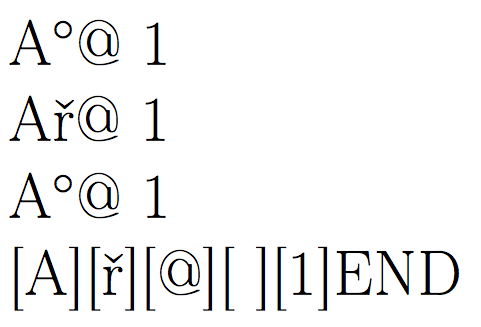 After update to original question. But it still isn't quite clear to me what is exactly the context. Here is how one can parse char per char, which is easy as everything but spaces is catcode 12. What I would do is to define macros \@namedef{mymeaning<char>} for special things (where <char> is one catcode 12 token, and perhaps use \ifdefined, and the others \scantokens can be used generally. Here I use \meaning and I separated backslash and percent because \scantokens on the char is no good then.

This is 8bit encoding ONLY method. I illustrate with iso-latin-1. Besides there are no \par token due to the \pdffiledump method.

In the above, some spaces (those delimiting a "word") are rendered via a \bigskip and others (spaces at start of lines for example) by <SPACE>\par.

which prints <SPACE>\par for all space characters from input. I also added an <END OF DUMP>\par (and removed the \bigskip).

But there is the problem that the last <SPACE> does not come from original, it is the one we added at end of \fff contents. There are various ways to get rid of it, but I don't know if the parsing loop is supposed to be expandable (so far, it is, it could be used in an \edef, if \par is let to \relax or prefixed by \noexpand to avoid special meanings it can have in a LaTeX document depending on location) so I leave it standing for now.

For example, here is output if \fff is set-up to contain the entire file. 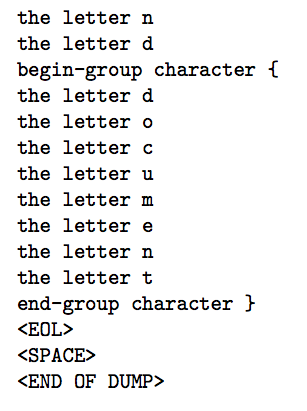 This last <SPACE> does not come from the file contents but from our macro.

Remark: "ParsePerWord" is slightly misleading, because "words" may contain end-of-lines. To be closer to what text editors call words, we should presumably first "ParsePerLine" using not a space but a ^^J delimiter.

Not the answer you're looking for? Browse other questions tagged catcodes or ask your own question.

11
Treating < and > as synonyms for the curly braces { and }
7
\scantokens in LuaTeX
20
Incompatibility between verbatim and tabu? (Danger of using \scantokens in a package)
7
Saving in macros plus \scantokens as an alternative to external files
15
Getting the catcode of a character assigned to a control sequence by \let
5
Viewing a character's catcode, and listing all characters with a given catcode
5
\scantokens not playing nice with \def or \gdef etc
0
How to get catcode of a name defined with \let (or with \def)?
4
About catcodes and active characters