Font that supports both upright and italics Scandinavian and Greek characters in math?

In terms of character support, a lot of LaTeX fonts leave something to wish for. At the moment I'm using Palatino for text and fourier for maths while having to accept that å, ä, ö, æ and ø only exist as upright in the math font and upright Greek letters are provided by other packages.

Is there any font which, for now regardless of how "pretty" it looks, supports all these characters in text and math mode – italics and upright included? (In ideal world, also bold math natively supported...) I.e. a single font which at least lets me type English-language science (which needs Greek letters, both upright and slanted) with the additional benefits of not having to use accents creatively to use regular Scandinavian letters (which I tend to also use as variable names etc.)

For background reference, these fonts seem to only concentrate on writing using only the Latin English alphabet: https://r2src.github.io/top10fonts/ ... and http://www.tug.dk/FontCatalogue/ is not searchable by supported characters (as far as I know).

EDIT: Disclaimer, because this always comes up: I have two goals: 1) generality, being able to use those commonly used letters properly in arbitrary context and 2) there are certain situations where I need exactly those Scandinavian letters as variables. Similarities with derivative dot markup is not an issue where I will be using these.

You can use these characters in math if you use \textrm and \textit rather than \mathrm and \mathit in most font setups these will use the same fonts. If you are using a font setup where they are different, a version of \textrm that uses the \mathrm front could easily be defined.

I find this not a good idea: it will confuse your readers, particularly if the dot above for derivatives is used elsewhere. In general, adorned letters have a meaning related to the unadorned one. 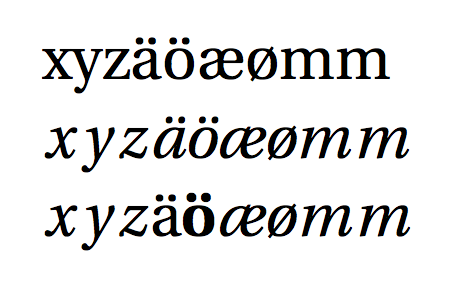 Not the answer you're looking for? Browse other questions tagged fonts unicode greek or ask your own question.