My use case is like this: I use a "symbol" font like fontawesome, where each letter/glyph is used as an icon, and is colorized in the Latex document using \textcolor. However, some symbols I need are not in fontawesome, so I need to supply them as vector art - that is, .pdf; and in that case, I'd like to colorize the thusly included PDF in the same way as the rest of the fontawesome glyphs.

So far, I've found this:

Can \includegraphics be used to change an image color?

Interestingly, for the vector graphics that I've tried it on, \color command actually changes all the black into whatever color was given.
This is supported by pdfTeX/LuaTeX only and only if the graphics does not contain color settings. This behavior can be overwritten by the option resetcolor for \includegrahics. Then pdftex.def calls \normalcolor before the image is included.

Easy case with uncolored PDF and pdfTeX (unhappily very seldom):
The PDF file contains some drawings without explicit color settings and the image will be included by the pdftex driver of the graphics package.

I was puzzled by this at first, but I think I finally came to an example on how to create such a PDF "without explicit color settings", which I'll post here - however, I'd like to know if there's a better/more generic approach that will allow me to "uncolorize" PDFs for inclusion with coloring in Latex (maybe by using imagemagick or something similar?).

Ok, so first, let's generate the vector image to be included using Latex - for simplicity, using picture environment (without Tikz); this is include1.tex:

So, after running pdflatex include1.tex, I get include1.pdf, which looks like this in evince (it appears colored with black):

Then, here is the Latex document I'll be including that into, testinclude.tex:

After compiling with pdflatex testinclude.tex, I can confirm all is as expected - that is, the included PDF is colorized:

So, clearly the PDF exported from Inkscape is not uncolorized any more, and so Latex cannot colorize it blue, so it appears black.

We can inspect the include1.pdf and include2.pdf by uncompressing them with the pdftk program:

... where we can see a bunch of PDF graphics operators like q and Q.

So, we can simply "erase" this RGB setting by replacing 0 0 0 rg (which is 8 characters long) with a string of spaces with same length (so we don't mess up the PDF XREF dictionary), either in a text editor like nano, or directly with sed:

... then replace the "Testing here 2" line in testinclude.tex with Testing here 2: \textcolor{blue}{\includegraphics[height=1em]{include2-unc.pdf}}, and recompile with pdflatex testinclude.tex, -- and then we're back to a colorized PDF inclusion, as in the first image in this post.

So, my questions are:

Instead of replacing text in the pdf itself, you could use tikz to colour the shape in the pdf: 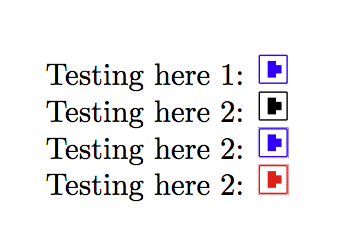 Not the answer you're looking for? Browse other questions tagged graphics color pdf or ask your own question.

56
Can \includegraphics be used to change an image color?
27
Coloring a black and white PDF graphic
20
Change color in finished pdf file
4
including logos with different colors