What are the differences between $$, \[, align, equation and displaymath?

I once learnt, that it is uncool to use $$, but why is that? Why does \[ not act as a abbreviation to \begin{align}? I noticed, that there is a difference, since one cannot use & and \\ inside a block started with \[.

As I understand your question, you'd like to know what the differences are between constructing display-math expressions using the following five methods:

Actually, you asked about the align environment. However, I think that for the sake of providing a straightforward comparison among the display-math methods, it's better to focus on the gather* environment, which centers its contents and doesn't generate an equation number. Compared with the gather and gather* environments, the significant added capability of the align and align* environments is their ability to vertically align equations along certain elements, such as on equal signs.

The first method is the "Plain TeX" method for generating displayed equations. ("Plain TeX" refers to a set of macros, written by Knuth, designed to make the so-called "TeX primitives" usable for ordinary typesetting purposes. A full explanation of what the $$ specifiers do is provided on p. 287 of the TeXBook.)

However, using the $$ method to initiate and terminate display-math mode in LaTeX documents is nowadays heavily deprecated. See the posting "Why is \[ ... \] preferable to $$ ... $$?" for a detailed discussion of why one should not employ $$ ... $$ directly when using LaTeX (or one of its successors, such as pdfLaTeX, XeLaTeX, etc).

The second method, \[ and \], is Leslie Lamport's re-implementation of the Plain-TeX $$ ... $$ method. The LaTeX code that defines the \[ and \] commands is contained in the file latex.ltx:

Basically, \[ and \] act as carefully designed wrappers around the opening and closing $$ directives. Error messages will be generated if a \[ statement is encountered while TeX is already in math mode or if a \] statement is encountered while TeX is either not in math mode at all or if it is in "inner" math mode. You may ask, "What is 'inner' math mode?" A leading example of "inner" math mode is the material inside a \left<x> ... \right<y> group, where <x> and <y> denote suitable delimiters, e.g., ( and ). If LaTeX encounters \] while in inner math mode, it produces the following error message:

(If you were using $$ directly you'd get a slightly more cryptic error message.)

Furthermore, the command \[ checks if TeX is in so-called "vertical mode"; this happens to be the case, most commonly, at the start of a paragraph. If that's the case, i.e., if TeX is in vertical mode, the instruction \nointerlineskip is executed to avoid inserting some additional vertical space immediately above the displayed equation.

This issue is illustrated in the following example, which contrasts two cases. In both cases, the code starts with a bunch of em-dashes, followed by a blank line (which inserts a paragraph break and switches TeX to vertical mode) and then a displayed equation. In the first case, the displayed equation is generated via \[...\]; in the second case, $$...$$ is employed. Note that in the second case, some extra (and presumably unwanted) vertical whitespace gets inserted above the displayed equation; this does not happen in the first case, courtesy of the \nointerlineskip directive that's part of the \[ directive. 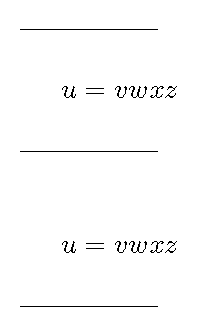 The LaTeX code for the third method is simply:

i.e., it is (essentially) equivalent to the second method, while arguably being easier to read and debug. By easier to debug, I mean that these commands are not as easy to overlook as are \[ and \].

Note that these first three methods do not generate equation numbers.

As implemented in LaTeX -- but without loading the amsmath package -- the code for the fourth method (\begin{equation} ... \end{equation}) is:

As you can see, the equation and equation* environments eventually call the \mathdisplay and \endmathdisplay commands, which, in turn, call the TeX $$ directive. Incidentally, amsmath also redefines the LaTeX commands \[ and \] as follows:

(Observe that because displaymath is defined in terms of the \[ and \] commands, its appearance too may change when used in combination with the amsmath package.)

On, then, to the code for the gather* environment:

where the \start@gather command is defined as

The command \endgather, which is defined implicitly, executes the following instructions:

The main thing to take away from examining these lines of code -- without going into too many of the details, many of which relate to the fact that the align, align*, gather, gather*, etc environments can typeset multiple, consecutive lines of displayed-math material -- is that the gather* environment too (eventually) calls the $$ TeX macro, while taking care of quite a few housekeeping and error-avoidance steps along the way.

In sum, one thing that should be amply clear from all this is that using the $$ constructs directly is unnecessary and even reckless, as doing so risks causing all kinds of messy screw-ups. The alternative methods 2 through 5 take care to avoid these problems and should therefore always be preferred to using the $$ pair of commands.

$$ is not supported in LaTeX at all, it is primitive TeX syntax that just happens to sort of almost work most of the time. The standard LaTeX classes for example all have a fleqn option to align rather than center \[ \]. Even with no options, the behaviour of \[ and $$ are different at the start of a paragraph, where \[ does

The differences have been described, in earlier answers, I am just adding here for illustrative purposes regarding vertical spaces this image:

which is obtained from this code:

Notice the vertical spaces added by the \[..\] construct, which furthermore are asymmetrical between before and after. Apart from that the \[..\] does some error checking whose usefulness, IMHO, is limited to the real beginners in LaTeX.

Here is another image: 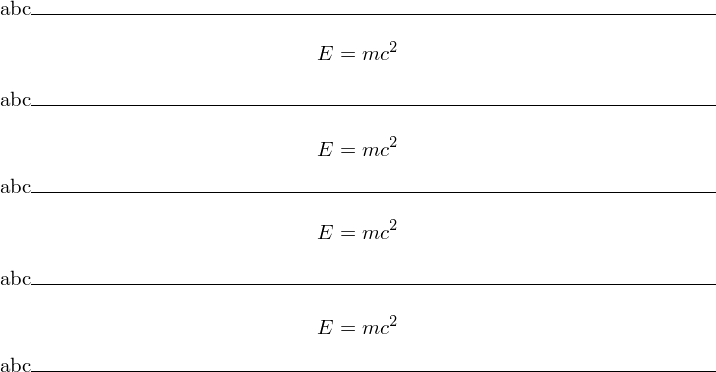 obtained from this code:

Notice the incoherent vertical spacing resulting from the use of \[..\].

I do not include the images here, but one can check that these incoherencies do disappear with \usepackage{amsmath} (for reasons which are clear from looking at the code reproduced in Mico's answer). I know my opinion is ultra-minoritarian, but clearly, only for people using amsmath can one convincingly argue it is better to not use $$ directly.

Certainly $$ is not in the spirit of the LaTeX syntax, but the \[ in LaTeX2e is not coherent with the other math environment in its handling of vertical spacing. Thus, I personnally concluded that when I am not loading amsmath, I should rather avoid \[.

Also align does not behave the same way as \[...\] regards to spacing before. \[...\] and the equation environment can adjust the spacing above the equation if there is enough room, align cannot (because of the manner in which it is constructed)

An additional answer that is one of the most important for me: the cleveref package will automatically handle an equation contained in \begin{equation} but not \[.

Not the answer you're looking for? Browse other questions tagged math-mode equations align amsmath or ask your own question.

98
align vs equation
161
align* but show one equation number at the end
4
Are the \[ and \begin{equation} used interchangeably?
4
Align definition of variables of an equation right (not next to the equation)
4
Equation* with split same as align*
3
How can I align this equation in the center?
0
align vs equation: vertical space before equation
8
Why does an empty line between text and "align" have an effect, but not between text and "equation"?