I am using acro package to make a list of acronyms used throughout the text. When I use the acronym for the first time in a figure's caption, it won't show up in the acronyms list. It stays like that even when I again use the same acronym somewhere else (see CMS in the MWE below). If the acronym is first used before the figure, everything works fine (see ATLAS in the MWE).

The question: How do I make acronyms that first appear in figures' captions appear in the acronym list?

The problem is the singleline check done by a caption: The caption is stored in a box and measured. As your caption is longer than one line, this box is thrown away and the text is printed as is.

This has two effects: The acronym is marked at used when the box is created and so you get the short acronym in the caption in the second step. And as the box is thrown away nothing is written to the aux-file and so the entry is missing in the list.

The easy way to avoid both problems is to avoid the singleline check with e.g.

If you don't want this: The first problem can be avoided by adding a reset to the caption, the second by marking the acronyms again as used after the caption. This leads to the following. As you can see it works for both acronyms: 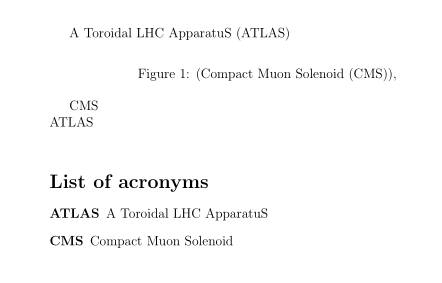 Side remarks: 1. figures are float objects and not part of the normal reading flow. I would avoid to have the only extended version of an acronym in a caption. 2. The list of figures can change the output again ...

In accordance with section 3.6 of the acro manual. This can be done with the command \acuse{acronym} If you whish to have the long form appear, you can either use \acf{CMS} in the caption, or use it the next time you use the command.

The danger of using \acf{CMS} in the caption is that you might want the first use to be elsehewhere, and then you have to remove the f, the correct way of doing it should be: \acfifused{CMS}{\ac{CMS}}{\acf{CMS}\acuse{CMS}} And I'm pretty sure this is was the normal \ac command does. however the real bugs seems to be with \acifused. 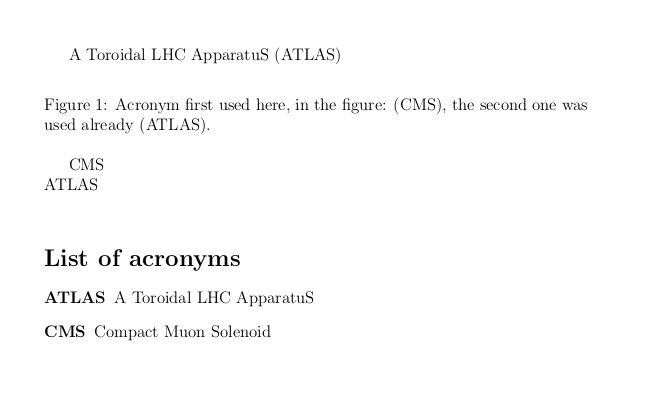 Not the answer you're looking for? Browse other questions tagged captions acro or ask your own question.

6
Problems with acro package and greek babel?
2
Acronym: show only the long version and only once with the citation and/or footnote
3
Aconym Styles in Book
3
Problem with acronyms in figure caption using acro package
2
acro long format for plural acronyms
1
acro-package: Always use long form for defined acronym?
2
Define different \printacronyms template from acro package
0
Sync short caption (for a figure list) with part of the long caption