How to create a rectangle with a transparent hole [duplicate]

I have an issue involving filling a rectangle, although, this is probably quite a simple problem, this has compeletly stumped me...

Is there a way to fill in a rectangle with a particular colour but make an exemption for a circle in the centre? So that that part has no colour and is transparent?

Section 15.4.2 of the tikz manual talks about this.

(The number of the section may change as the manual is updated, It should be the section relating to "Graphic Parameters: Interior Rules")

I will first copy the explicit points of the manual that pertain to the question. And afterwards paste your answer. You can skip directly to the answer if you don't want to read the long twisted explanation

The thing is, there are two ways in which TikZ may understand if an area is to be filled with a color or not

Therefore, in your simple case, both rules will produce the same result. What you need to do, is to place both shapes in the same path command (or \draw or \fill), and the algorithm with take care of making a hole in the "inside part" of your path. 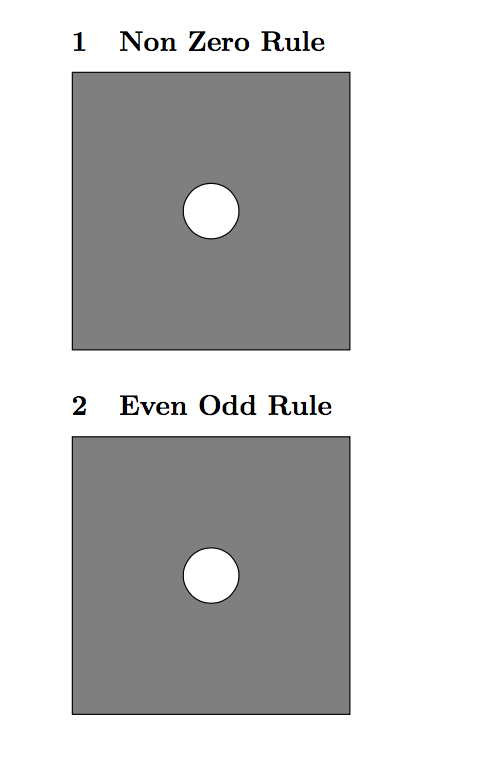 As you can see, both rules apply to your shape in the same way. But to cut holes, you are going to be more likely to use the "Even Odd Rule", since you won't know which direction is each shape being drawn.

A PSTricks solution for comparison purpose only. 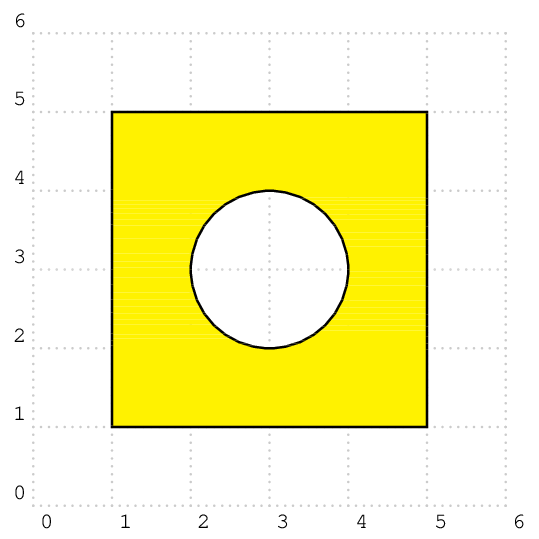 Not the answer you're looking for? Browse other questions tagged tikz-pgf tikz-shape or ask your own question.

3
TikZ — rounded rectangle with transparent holes and custom width of borders
4
Create cutout of rectangle, where cutout is also node

16
Numerical conditional within tikz keys?
1
Fill and draw option
7
How can I define a key that adds a coloured border inside a closed path, but plays nice with \fill?
10
Why white transparent color becomes grey?
0
How to fill the space between two curves with colors
3
Multipart rectangles color filling not working properly when one part has no fill
1
How do I change the radius of circle in a node in tikz style?
3
Document header with tikz