I am preparing a book with memoir. The book has three parts. I would like to have the Part title raised and to insert an image directly below the title. I am able to raise the Part title to the upper portion of the page, and to add an image, but the image falls on the following (normally blank) page (see minimum example, below).

How can I get the image to appear on the same page as the Part title, directly under it?

Here is the minimum example:

Using the same technique as in this question Adding a figure to a Part Page it's much easier to do with memoir:

First we define a command to set the image name for each part. This command takes the same arguments as the \includegraphics command from the graphicx package. Then we add the image to the memoir class \printparttitle command. You can play with the \vfil commands to change the vertical spacing as you require it. 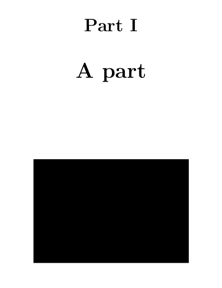 This is not an answer, but rather a follow-up to my comments to @Alan Munn's answer. I made it an answer so that I can include code examples.

My problem was not that I used the subfiles package, but rather the fact that I did not always add an image to the part page. Here is a simplified example: the part page includes an image and it works as advertised (practically the same as Alan's example):

However, if I comment out the \partimage command because I do not want to add any images to the Part page:

then I get the following error:

This probably happens because \printparttitle expects a \partimage, or so it seems to me (please correct if I am wrong here).

As I am new to LaTeX, I cannot propose an elegant solution. Possible hacks: One could invoke \partimage{some_dummy_image.jpg} with the dummy image being a 10x10 pixel white box. Or maybe one can rewrite the \partimage command so that it does nothing if invoked as \partimage{} (this I can't do due to lack of knowledge).

Summary: use Alan's solution if you always decorate the Parts pages with images.

Not the answer you're looking for? Browse other questions tagged sectioning graphics memoir parts or ask your own question.

3
Adding a figure to a Part Page
3
Redefine report Part with image
1
How to put an image in \part page
2
memoir: Adding text below part title?
2
Adding an image to the same page as \part with book class?