I chose the subfigure width equally 1/3 with the rationale that the figure span \textwidth exactly. From the result, 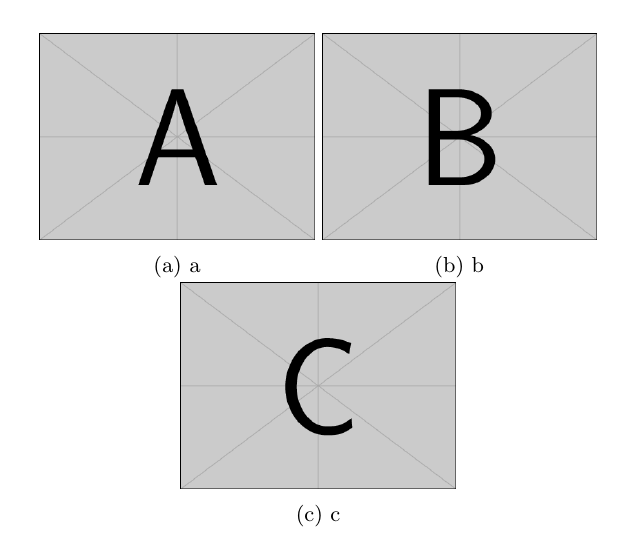 one can deduce that there is some overhead.

How do I optimally chose subfigure width so that the figure span textwidth exactly for N = 2, 3, 4, ... subfigures?

What is happening is that between each subfigure you have a new line that, for TeX, is exactly the same thing as a space. So what you have is three subfigures with two spaces in between. To fix it, add a % after each subfigure so that TeX will not consider it as a space:

Since my answer was chosen even with all the other answers down here, I felt the need to add a few explanations for the future generations ;)

This is quite obvious when writing only text, like in the example above. But the same applies when you are using figures. If you insert a new line between consecutive \includegraphics or subfigure environments, TeX will treat them as spaces!

In Viesturs' MWE, the subfigure environments are separated by new lines, which are treated by TeX as spaces.

To check the effect of the spaces in Viesturs' MWE, we can first measure the size of \textwidth with:

Furthermore, we can measure the space of the current font using:

Well, Jimmy, another couple of things about TeX is that:

So, as far as TeX is concerned, this:

is exactly the same as this:

and observe that the second one does not have any space between the subfigures. Now, if we do the previous calculation without the spaces, we have 3 * 113.85pt = 341.55pt, which fits in the current \textwidth!

This may seem obvious to some, but for starters it's tricky to promptly see why 3 * 0.33\textwidth does not fit in \textwidth. A few months ago I frequently found myself naively changing 0.33\textwidth to 0.329\textwidth to make the figures fit on one line :P

Disclaimer: All the above is valid in normal typesetting mode. In verbatim, math, or other special environments the rules are different!

How to optimally chose subfigure widths so that the figure spans \textwidth exactly, for N = 2, 3, 4, ... subfigure environments? 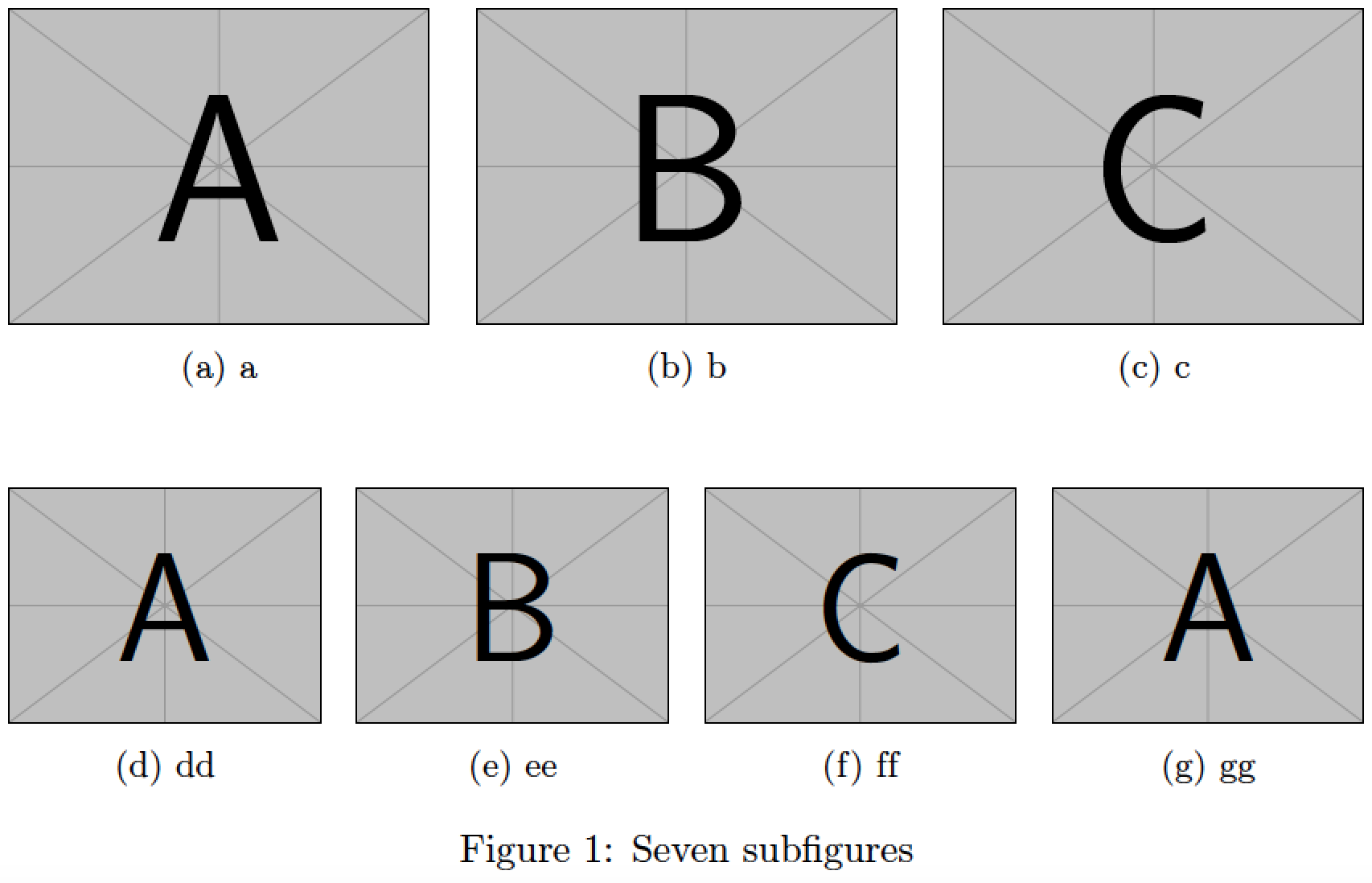 The following uses tabularx to automate the process of specifying the number of elements to distribute evenly across \textwidth: 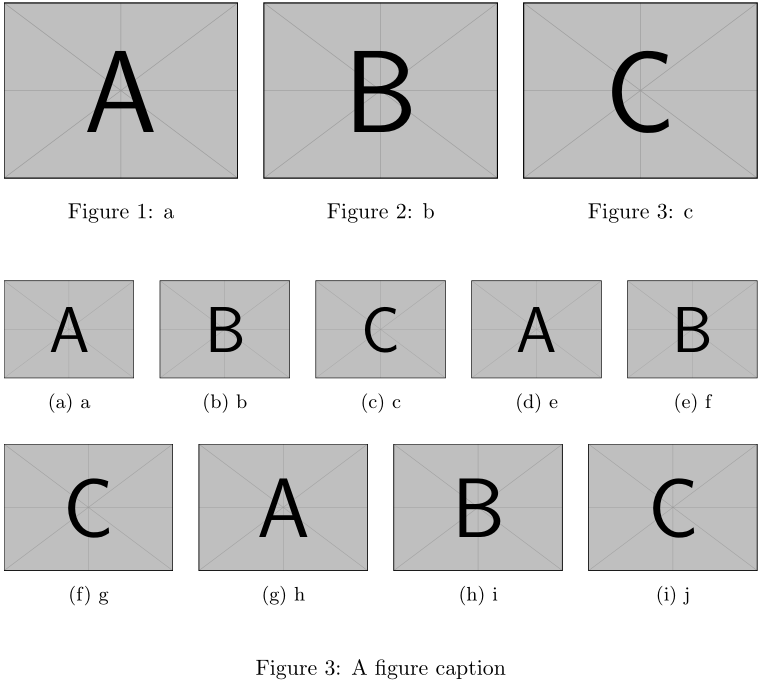 The distsubfig environment takes a single argument: the number of subfloats to distribute evenly across \textwidth; alternatively, the number of X-columns to use in a tabularx. The gap between the subfloats are \tabcolsep, just like in any tabular environment (and can be changed).

Here's a version where you just need to specify the number of subfigures per row.

The \maxsubgap is used between two figures per row; the gap goes asymptotically to \minsubgap as the number of figures per row increases. Choose both values to suit your needs. 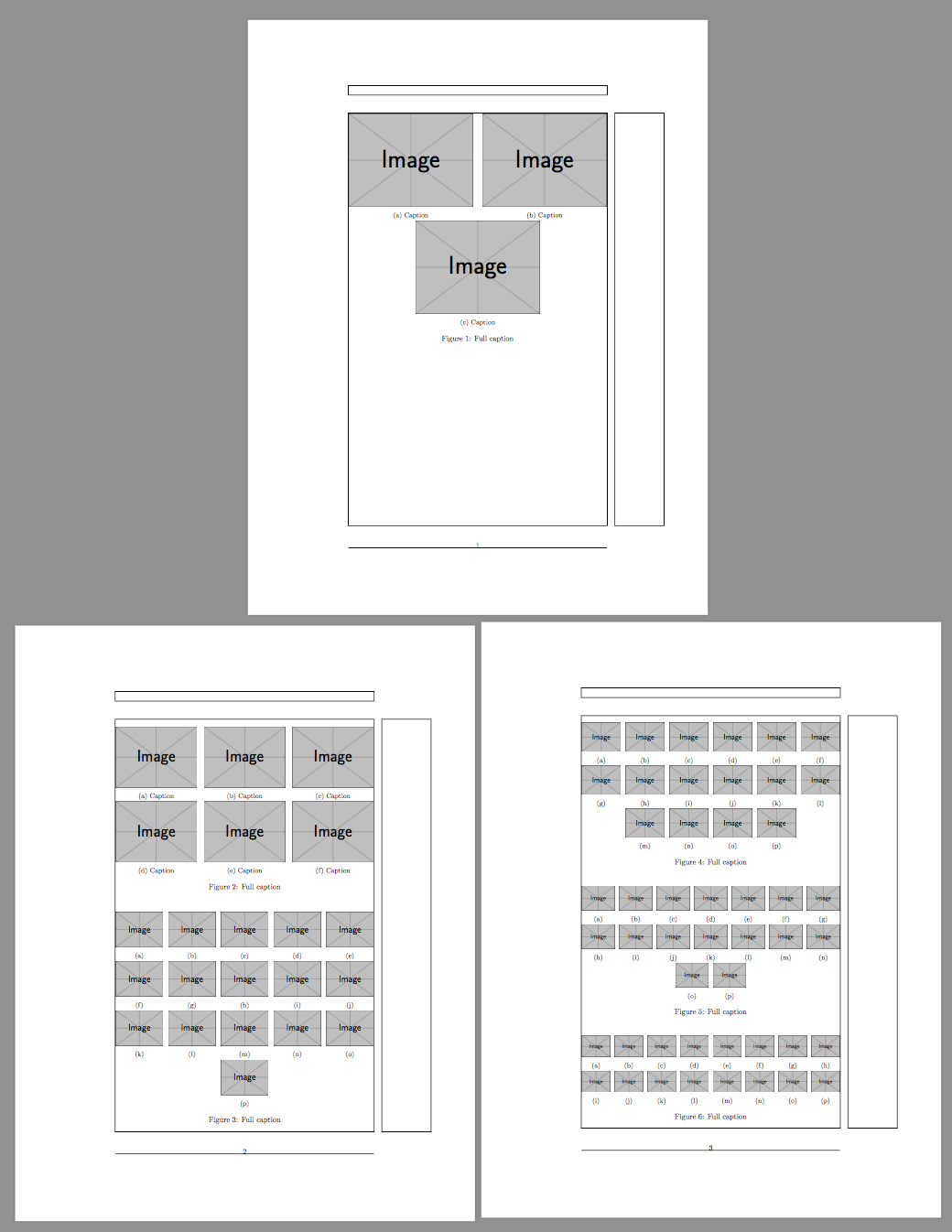 Not the answer you're looking for? Browse other questions tagged graphics or ask your own question.

1
Grid alignment of 4 images
11
How Can I Find the Length of a Space in TeX?
5
Unwanted spaces in user defined structures and the uses of %
2
hfill alignment doesn´t work
4
Automatic scaling of figure with side by side images with subcaption
3
Three images on one line using subfigure
1
How to align sentences in footnote
1
Copy pastable code in tex
2
Fitting 6 pictures in 2 rows: how to increase their size

8
Two figures side by side with text wrapping
10
Why are my Images not correctly centered?
1
Side-by-side figures with caption, specify height but use whole textwidth
0
Text inside Figures appear too tiny with respect to the document and are spaced far apart
0
Span Figure to Text Width in Lyx
1
Subcaption environment failed. All figures containing a subfigure crashing all of a sudden
0
Using subfigure environment for arranging image in grids using multiple rows and columns