in spherical coordinates taken from here. I would like to use this figure to illustrate unit vectors at the point P. I have not been able to adapt the figures given on various posts. I manged to run the asymptote code here but in pdf format it comes compressed such that it is unreadable. I would appreciate if someone can add me some code in tikz so that I can draw a circle through P, with vectors in the three directions, east, north and zenith. I reproduce the code from the first site quoted above (appreciation and thanks @jubobs)

Please note that I am only adding a small addition to this post. The addition is explained in the last paragraph above.

The code supplied by mammot does exactly what I was looking for, my real appreciation for spending time and effort mammot. When I incorporate the code I get 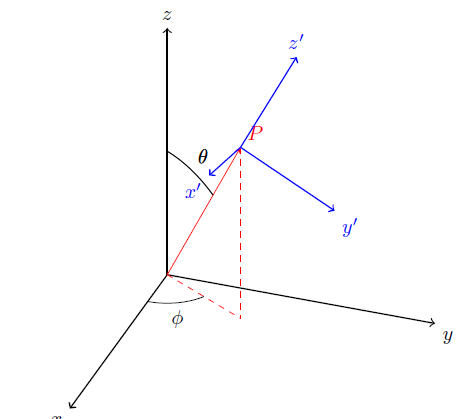 . I had tried to turn the vector in the positive x-direction (opposite to what is the figure) no success so far. Seconddly I would appreciate adding a circle from north pole to south pole through P. Sorry for being too demanding, but the work is done. This is what I wanted and its fine. Once more my appreciation.

Browse other questions tagged tikz-pgf or ask your own question.