Managing the set of files to be opened when WinEdt starts

My old laptop died, and I need to rebuild my TeX-system. The new setup:

In my old system I somehow managed to make WinEdt behave in the following IMHO desirable way. May be not your preferences, but this leads to an ideal workflow for me:

The trouble is that I don't have a clue how I managed it last time. I asked a lot of people (even the friendly people at WinEdt), and somehow I managed. (You guessed, those config files are only on the hard drive of the dead laptop.) What I thought was sensible guessing was not enough :-)

I just ran the WinEdt Configuration Wizard, and now it works somehow (.tex and .prj filetypes are associated to WinEdt). But the above problems persist because I really don't know which options manage this behavior and the FAQ is mostly Greek to me. Problems:

then what happens is that only the .prj file is opened. Not even the master file is anywhere to be seen.

How do I achieve this? Is there a WinEdt-options for dummies somewhere in the interwebs :-)

A problem a user like me has with WinEdt is that it tries to do so much. I probably only ever use a tiny fraction of the menu items, and it kinda overwhelms my feeble brain. I do realize that not everybody wants to just use tex->dvi->ps->pdf flow with only good ole LaTeX, so no problem there. It is just me.

When these problems are solved (I'm confident that some friendly person her knows how to), I will start worrying about character sets of files. Last time when I ported source made in Windows XP into Windows 7 I had serious difficulties getting with the different character sets (ASCII, UTF-8, whatnot), IIRC some of those issues were never fully solved, and I need to do strange things to get scandic letters "äöåÄÖÅ" to show correctly. Wish me luck! If I run into problems I will ask :-)

Edit: I tried tinkering in the Options Interface. No light bulbs for me :-(. More annoyingly, as a consequence of my tinkering some data about the ini-files were tagged into the .prj-file. WTF. Why should a prj-file have any information not related to the TeX-files of the project??

Edit(2): I asked Alex@winedt.com. Their diagnosis was that something had went wrong when I tried to run the Configuration Wizard. I think I ran with admin privileges, but I tried it again, and this time I added, as per Alex's instructions, "-V " in the command switch box. This cured the problem with prj-files as well as the problem of opening previous files.

That should be enough to achieve what you want.

Note that the right registry key might be HKEY_CURRENT_USER\Software\Classes\WinEdt.TeX if you don't have admin privileges.

Starts WinEdt in "Virgin Mode": the last project is not automatically opened and no files are immediately restored.

What Arzigoglu wrote in her/his answer is perfectly right.

In fact -V is the right command line switch to start WinEdt in "virgin mode".

However, instead of modifying the Windows registry, this can be done directly from within WinEdt.

Open the Configuration Wizard dialog from the Options menu and select the "Filetype Associations" tab.

Depending on your privileges, choose "Modify filetypes associations" for All Users or the Current User. The following dialog appears: 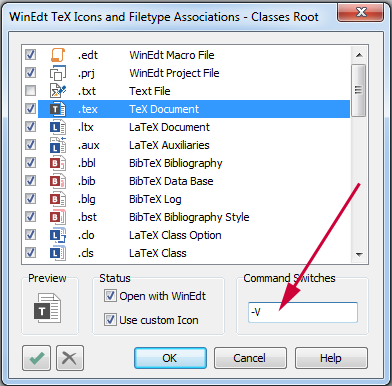 Simply add -V in the "Command Switches" field for all the filetypes you want and then press OK.

Not the answer you're looking for? Browse other questions tagged winedt or ask your own question.