Change sorting of authors in the index generated by Biblatex

I am looking for a way to change the way in which author (or editor) names are sorted in Biblatex-generated indexes.

In French, we use accented letters such as é or è, which should be sorted with the main letter, in this case e. Whenever a name contains such an accented letter, it gets sorted out of order, so we need to index entries using: no accents@with accents. I understand how to get Biblatex to use an @ in the index, but not how to feed it the proper string.

How can I make sure that Biblatex either:

The solution from this answer works partially, as shown in the following example:

The first name gets indexed properly, as an E letter, but the second name also gets indexed as such, because we are using a literal field instead of a name field for the indexauthor name (in this case, usera).

Would it be possible to use a name field instead and make sure both names get indexed properly? I realise that this may be impossible due to the way in which fields work.

In that event, how could I convert the special characters on the fly? Or tweak the indexing process itself so that it sorts accented letters properly?

You need an index tool that can handle UTF8 correctly, then there is no need at all to manipulate the sorting manually. This is not really a biblatex problem, its an issue of the indexing tool. 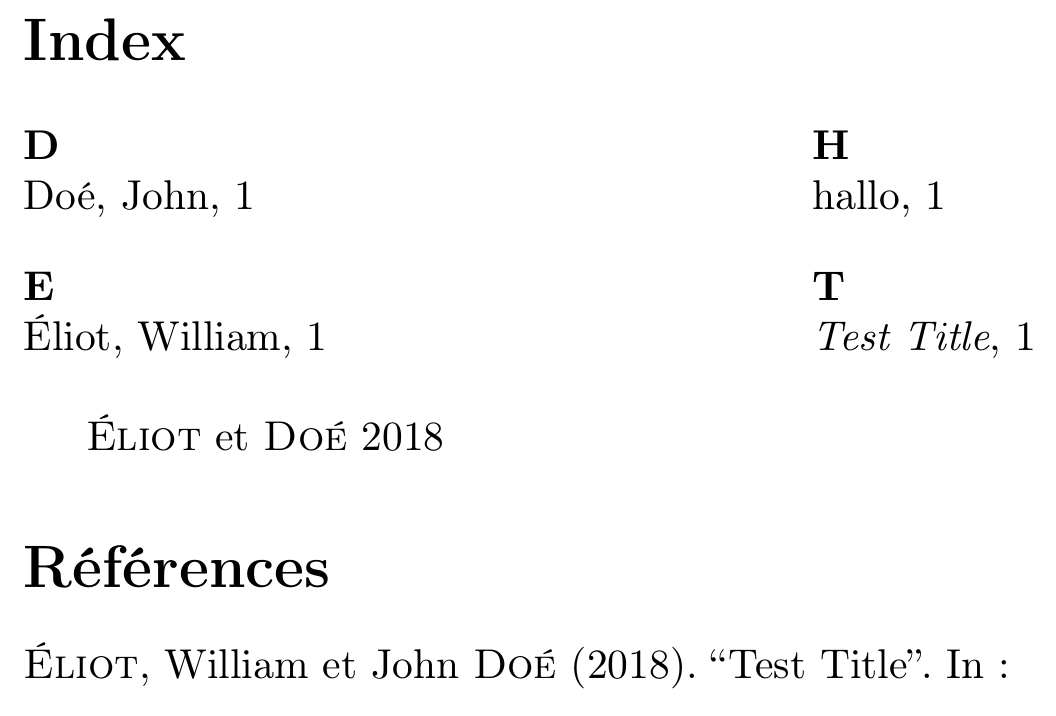 Not the answer you're looking for? Browse other questions tagged biblatex indexing strings or ask your own question.

17
How do I include all authors of cited works in an index of persons?
2
Redefining ordering in index
8
BibLaTeX: sorting alphabetically with non-latin characters (Ś)
1
formatting names in an index so that they appear in small caps
1
String to sort index of authors generated with biblatex
5
Get a command to ignore stuff in braces?
3
Indexing with biblatex - names only
2
Biblatex - How to access the “saveddate” using “\entrydata*”?
3
Biblatex doesn't recognize the journal's issue number when filled by a non-numeric value