I came to see text as a two dimensional feature, but I must be missing out on something...

(following was off-topic: by the way, im trying to find documentation on how to use \vbox, \hbox,… i.e. to align a hbox within a vbox to the right) 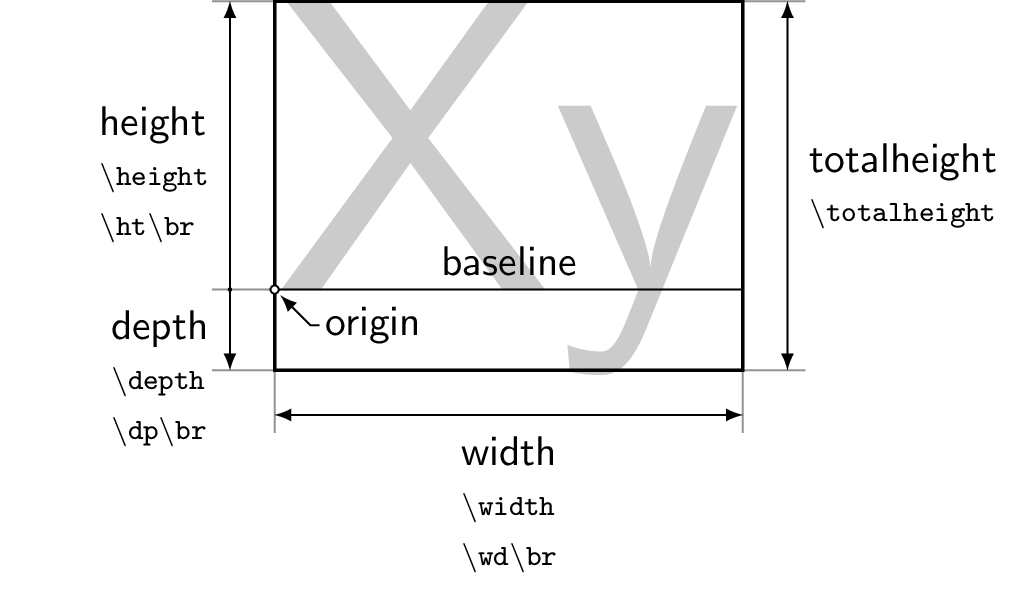 As you can see the text lies on the baseline, the height is everything above it and the depth everything below it. Usually only some lower-case character and punctuation go below it. Both together is the totalheight. Note that the coordinate system for the depth is going down, i.e. it is always positive. The width is the normal width of the content.

The macros in the document show how to access these values in LaTeX macros like \raisebox (first line) or with a TeX box register called \br here (second line).

There are further diagram which explain the trimming and clipping of boxes. The current work-in-progress version of the manual with this diagrams can be downloaded as PDF from the code repository. The source code for this and all other diagrams are also available.

This is what you want:

And use the height and width of ( for \structbox:

You may need to read the TeXbook or similar books for Plain TeX (esp. free books TeX for the Impatient and TeX by Topic) to understand the \hbox and \vbox well.

Indeed for TeX letters are three dimensional objects. TeX lines up characters at their baseline, what goes below the baseline is their depth.

As Feynman once explained there are always different perspectives to out common understanding -- in this case -- the words three dimensional. For metafont there are multitude of dimensions describing a particular letter. Use the package layouts to see the values and generate the image above.

In TeX speak, every "box" -- think of a rectangle, except that the rectangle could have one or more of its "dimensions" set equal to zero -- has height, depth, and width. The width part has the obvious meaning, being measured along the horizontal axis. The height of a box is measured up from the baseline, and its depth is measured down from the baseline. (One could refer to the sum of the height and depth of a box as its "total" height.) For typesetting purposes, it's essential to know both the height and depth of a box because when TeX creates a line of text out of a series of boxes, the boxes need to be aligned on the baseline.

The strut you bring up in your question is a special TeX box which has the height and depth of the parenthesis symbol -- ( -- but has zero width and is therefore invisible. Being able to insert such a special box is a very handy typographic tool, because it forces the box that encloses it and the other ("real") items in the group of boxes to have at least the height and depth of a parenthesis.

The following code demonstrates how inserting struts can make the output look more polished. (The formula I've come up with is obviously highly contrived!)

Hopefully, then, the insertion of the struts will make for a more polished and thereby more visually pleasing appearance of the overall formula.

The following image is inspired by an image from the TeXBook and shows the different parameters: 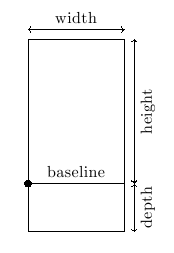 For more information about commands like \hbox and \vbox you can have a look at The TeXBook or TeX by Topic (or any other number of TeX related books, I assume).

Not the answer you're looking for? Browse other questions tagged tex-core boxes dimensions strut or ask your own question.

1
Difference between text-height and text-depth in tikz?
41
Why do \sqrt{1} and \sqrt{-1} have different heights?
4
How to simply align table content both vertically and horizontally
5
Use dimensions \totalheight \depth for inline TikZ drawing
4
Get depth from a generated PNG with chemfig package
2
Symbol not in line with text
2
Representation of skillpoints on LaTeX
1
Beamer sidebar dimension and relation with headnote and footnote
1
Drawing grid lines to show vertical position of text
1
The center of a PGF coordinate node
See more linked questions

17
How do I (temporarily) cancel centering?
12
Why is `\strut` working in these scenarios?
15
Strange behaviour of \sbox
11
Depth and height confusion
6
How to measure the minimum width or height of several boxes?
6
\vtop vertical top alignment of \vsplit \vbox
4
Text in TikZ nodes: controlling the box variables of characters/string
1
character box depth and height