This worries me, because sometimes I want to emulate "multline equations", and I want the equations to be aligned like that but without putting an = sign at all.

Is it known, explainable behaviour? I.e., is it a bug or a feature?

The technical reason is that the align environment adds an empty math object {} to the beginning of the second cell in each aligned column, but doesn't add it to the end of the first one. This is precisely so that the equals sign behaves as though it comes between two variables when you write &=. I honestly can't figure out why it doesn't add one in the first cell also; although it does occasionally change the spacing (such as when writing =&) it never seems to do so in a way that is obviously wrong.

As others have suggested, you can write ={}& when you want the equals sign to have the correct spacing.

It is a feature, and an important one: it is simple and efficient for the vast majority of cases, because quite frequently align is used for aligning successive rows at a relation symbol. With &= you are guaranteed to get the correct spacing around the = sign.

On the other hand, sometimes one can need also to "align after the equals". There are various ways to accomplish this task.

For example, if the right hand side of an equation to be aligned is too long, you can use aligned:

This is by no means a "workaround": it marks correctly what one is going to achieve (apart from a small adjustment that may indeed qualify as a small bug, but would also be there with a =& syntax).

Why did the developers of amsmath chose this instead of =&? Well, one reason is that they borrowed some ideas from the TeXbook. But, more importantly, many cases of align follow the pattern

where a =& syntax would be cumbersome.

In some cases it can be handy to align differently; I've found some of them and

What it actually outputs is a tabular with four items like

As for your question, the spacing is added only when there's something after it. If nothing is after the "=", no space would be added.

I've also figured out why they do not add {} in the first cell $A{}$ ${}B$. Consider A&=-B. If add {} in both cell, the spacing between the "=" and "-" would become bigger(space is added twice). Also, "=" should be on the right-hand side, or the minus sign would be recognized as an binary operator, thus cause extra space between minus sign and B.

You can see none but the first one made the correct spacing. 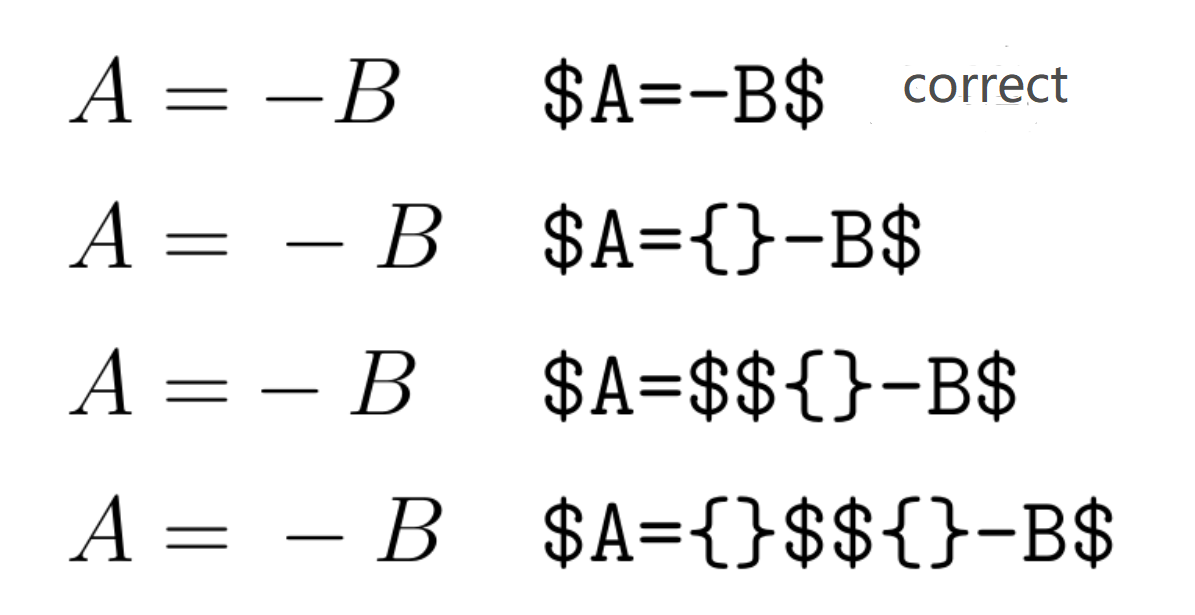 In real life, the Relation sign is often followed by Ordinary, But to proceed with Ordinary/Binary/Operator. Thus, the author made suggestions "=" must on the right so that character after "=" could be classified (Ord/Bin/Op) correctly.

In our little example, only when the Rel is on the right can the TeX figured out the minus sign as Ordinary rather than a Binary.

As for your question, if you don't mind adjusting the spacing manually, you can use A={} & B. or you can use

The \; is normally added by TeX automatcally.

Not the answer you're looking for? Browse other questions tagged math-mode spacing amsmath relation-symbols or ask your own question.

52
Why is there a \, space at the beginning of the "aligned" environment?
56
Multiple Alignment in equations
8
Aligning relatively positioned nodes in TikZ

11
How do I make "gather" object, place its self in the text, the same way as an equation object?
4
Smaller matrices (or other math elements) in displayed math
2
Aligning equations by row and column -- with vertical lines
25
Why does \widehat behave differently if I insert \hspace{0pt}?
10
Left aligning equations without align character
4
Adjusting the width of a displaymath environment
2
Is there a way to put two labelled equations into one \begin{equation} and align both of them at the beginning?
0
Aligned block misaligned with leading extra white space
2
Spacing of relation and operation symbols with propositions