In some cases I need multiple languages in the same LyX document (e.g. when quoting an English text in a German document) and would like to have correct spell-checking for both parts.

LyX apparently supports multiple languages in a document to some degree, because copy-pasting text between documents of different languages results in some blue-underlined text with the different language being set. In LyX's internal format, this is represented by a structure like

and once such multi-lingual content has appeared in the document, language settings become available in the Edit menu. 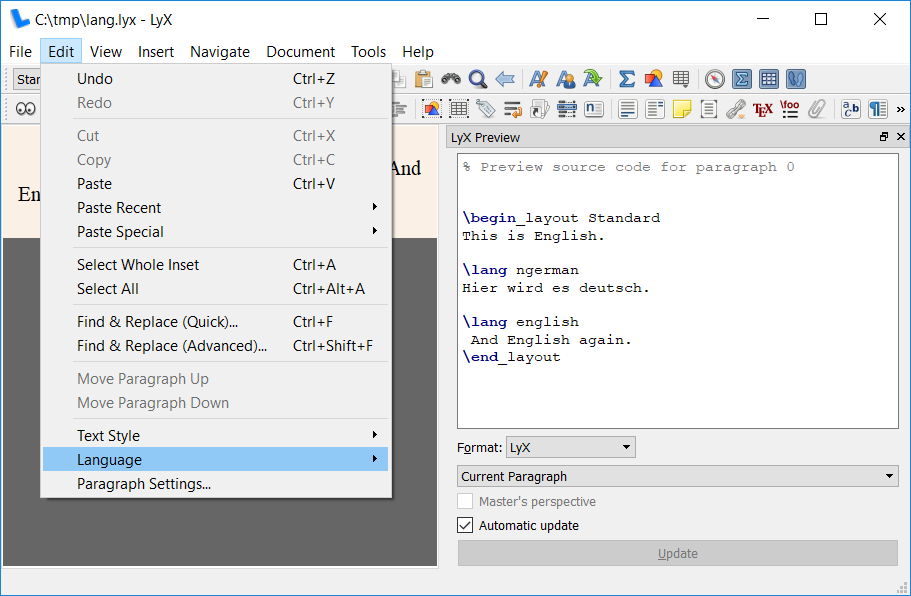 When removing the mixed language parts, the menu vanishes again, and thus I cannot find any method to add foreign-language content to a previously single-language document, without the inconvenient copy-paste workaround.

Is there some better way to mark some words as foreign-language?

As pointed out in Lyx - put all text with same language, the answer can - somewhat unintuitively - be found in the Edit → Text Style → Customized dialog. 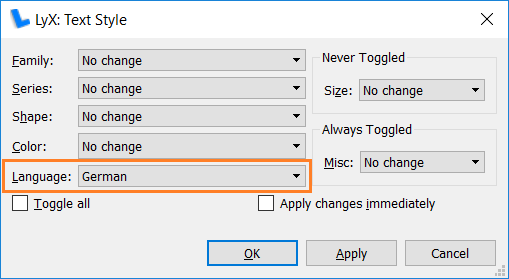 Not the answer you're looking for? Browse other questions tagged lyx languages or ask your own question.

17
biblatex: Switching languages for *citations* according to the bibentry's “hyphenation” field
26
Specifying multiple hyphenation exception lists for multi-lingual documents
6
Is it possible to use some sort of internationalization in LaTeX?
5
Multilingual text with if statement
3
Why nomenclature text is not English when loading additional languages in document class?
5
disable automatic insertion of \selectlanguage and \inputencoding in LyX
2
I need occasional Hebrew letters in my English text
3
Using Babel inside my own package produces option-clash error
3
\vref uses wrong language in LyX as soon as I use two languages