Vertical Justification of \in

Using this code it can be seen that the epsilon symbol and R are vertically misaligned. Is there a way to fix this? 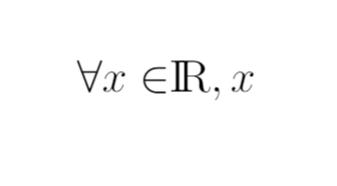 First off, your screenshot does not show either \epsilon or \varepsilon. Instead, it shows a symbol that's produced in TeX and LaTeX by the macro \in. When read out loud, this symbol is usually pronounced (in English) either as "in" -- hence the name of the macro... -- or as "is element of". Second, in LaTeX, it's generally preferable to write the letter that denotes "the set of real numbers" as \mathbb{R}.

Aside: Writing {\rm I\!R} has been deprecated since about 1994, when LaTeX2e superseded LaTeX2.09. Writing {\rm I\!R} just so happens to still work in some LaTeX document classes -- but not in others. If you care about portability and long-term maintainability of your code, you should no longer be writing \rm, \it, \bf, \sf and \tt; instead, do write (in a math context, obviously) \mathrm, \mathit, \mathbf, \mathsf and \mathtt. If you insist on not using \mathbb{R}, you should write the symbol as \mathrm{I}\!\mathrm{R}, not as {\rm I\!R}.

Back to the issue of how \in should be positioned. In fine typography -- which is, after all, what TeX and LaTeX aspire to achieve -- there are separate rules for typesetting letters (Latin and Greek, both lowercase and uppercase) on the one hand and for typesetting non-letter symbols (including \in, +, \times, \div, \sum, etc) on the other. Consider the following list of letter and non-letter symbols, drawn using the Computer Modern (serif) math family.

Letter symbols are shown on the left (through \Pi): They are all aligned on a common, invisible line called the baseline. (Two additional important lines are the x-height line and the cap-height line.) In contrast, non-letter symbols are not aligned on the baseline. Instead, they are positioned by centering them vertically on a common line that's frequently called the math line or math axis. (What and where is the math axis?, you may ask. It's an imaginary horizontal line located between the baseline and the x-height line. The horizontal portions of +, - ("minus"), and \div are placed on the math axis.) Do note that whereas the Greek uppercase letters \Sigma and \Pi rest on the baseline, the non-letter symbols \sum and \prod do not. It's not just a matter of \sum being taller than \Sigma; a portion of \sum clearly reaches below the baseline, which is -- by design -- not the case for \Sigma.

The following screenshots illustrate how different font designs affect not only the shapes of various math glyphs, but even where the math axis is placed relative to the baseline and the x-height line. [The line-drawing code, incidentally, is adapted (stolen?!) from Paul Gaborit's answer to the question, Why do all symbols in $x \in X$ have their own baseline? Credit where credit is due!]

Obviously, the fonts all have their special features. What's common among all of the math glpyhs, though, is that they're all centered vertically on the respective math axes.

Code to generate the first two screenshots shown above:

Code to generate the screenshots with the various horizontal lines:

as you can see from mwe, there is no standardized way which assume that typesetting on your desired way is good typography. i suggest you to read some introductory text about math typesetting with latex as for example wiki/LaTeX/Mathematics and then wiki/LaTeX/Advanced_Mathematics.

You can use the amsfonts package to get access to the black-board bold fonts with the \mathbb{} macro:

The following definition of \In creates a variant of \in: 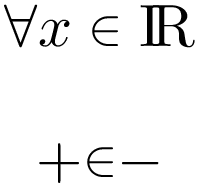 And the version for \notin: 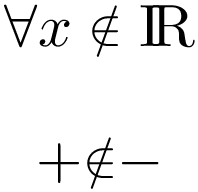 Just use a different font. I guess you have experience with Microsoft Word where Cambria Math is used for typing equations. Therefore:

This produces desired result without any adjustments:

Not the answer you're looking for? Browse other questions tagged math-mode formatting symbols or ask your own question.

47
A centered plus-minus symbol
19
Why does \widehat behave differently if I insert \hspace{0pt}?
8
Two figures side by side with text wrapping
6
Converting all numbers in document to set number of decimal places
4
Different vertical position of summation limits in consecutive \sum
1
Vertical alignment using cases
3
How to remove blank page at beginning of \documentclass{article} with \usepackage[affil-it]{authblk}
1
Is there an automatic way to justify a text vertically?
1
Background Color for Section Title