I am using the IEEEtran class and \usepackage{amsthm}. How can I set a counter for the theorems, independent of the sections? Let's say my first theorem has three parts and my second theorem has two parts. How can I generate?:

I am not sure I understood the question in its full extent, but there should be subtheorems that have a theorem and a subtheorem number. The easiest way is to define a new subtheorem environment that uses the theorem counter as driver counter. 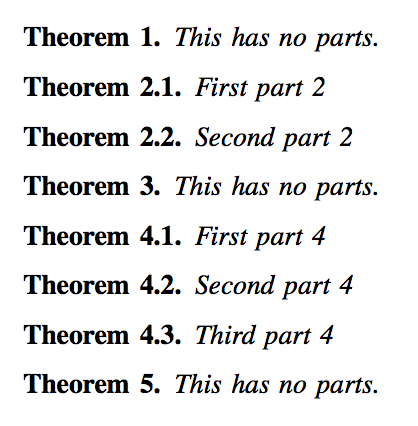 Not the answer you're looking for? Browse other questions tagged numbering amsmath theorems counters ieeetran or ask your own question.

12
How do I get the numbers for theorems, lemmas, examples, etc. before the type?
71
Theorem/Definition/Lemma problem — Numbering
3
setting section number, etc with counter
2
Problems with theorem/definition/statement numbering
7
Numbering Theorems/Definitions together, by section and without section symbol
0
I'm having troubles with the theorem orders
2
Continuous Counter for Figures
2
Changing Theorem Numbering Format in Different Sections
0
How to number lemmas according to theorem counter