Changing Type Area for Full-Page Floats with no Headings

Consider a document with a couple of full-page floats. These float pages you've assigned the empty page style, as you've considered it unnecessary and distracting to retain, on these pages, the complete, verbose headers that you're using on the regular text pages.

A consequence, though, is that now the float comes across as placed a bit too low in relation to the text pages' type area. With the ~two extra lines that have become available by leaving out the headers on the float pages, it's pretty awkward to see the top of the float being aligend with what's the first line of the text body (on the text pages): 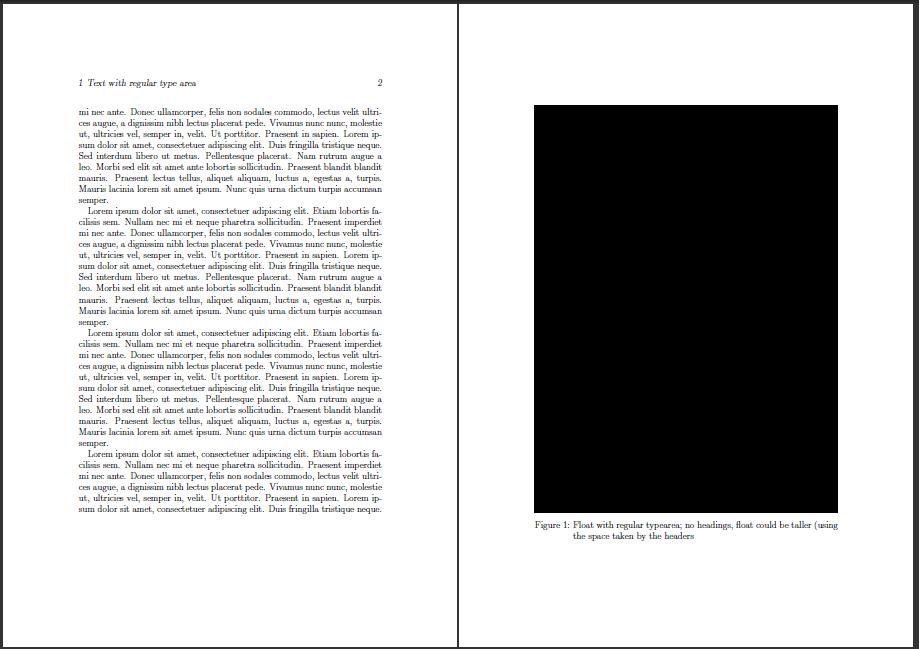 What you want is to modify the type area (on float pages) in a way that it's as high as the area taken up by text body plus headers. For it is that latter area (at least if our header is sufficiently long, forming a proper line of text) that visually we perceive as "the" type area (hence the headinclude option, see scrguide.pdf, chap 2).

What koma-script allows us to do is to change the type area in mid-document. With this bit of code:

...we can switch back and forth between a type area that does, and one that does not include the headers. In the second half of my MWE, that gives us pretty much the desired effect on the float page, but of course that's not anyway near a solution, since the question remains:

How do we, in a sound, robust, way, automatically trigger a type area change whenever a full-page float is invoked?

There is, of course, a brute-force approach. If we're using the @fptop modification anyway (which I do), we can as well set that value to something negative, such as:

This does seem to work, and it even makes any use of koma-script's features unnecessary, so it's a class-independent solution. But very brutal it is.

This solution uses \afterpage and \newgeometry to activate the full page figure, rather than the other way around.

Note: Putting the caption into a savebox outside the \afterpage is to guarantee that the captions are numbered correctly (overkill).

Not the answer you're looking for? Browse other questions tagged floats header-footer typearea or ask your own question.

2
Get height of figure and caption - for wrapfigure pagebreak detection

10
Fancy headings with newgeometry
8
Dynamically insert full-page image at nearest page break
5
How to reclaim space from removing headers and footers
4
Place full-page figure float after the page where it's referenced
1
How to adjust textwidth and textheight to paper size in mid document? (and header and footer “length” as well)
2
Control space between (table) float environment and head
0
How to influence page number/position of float pages?